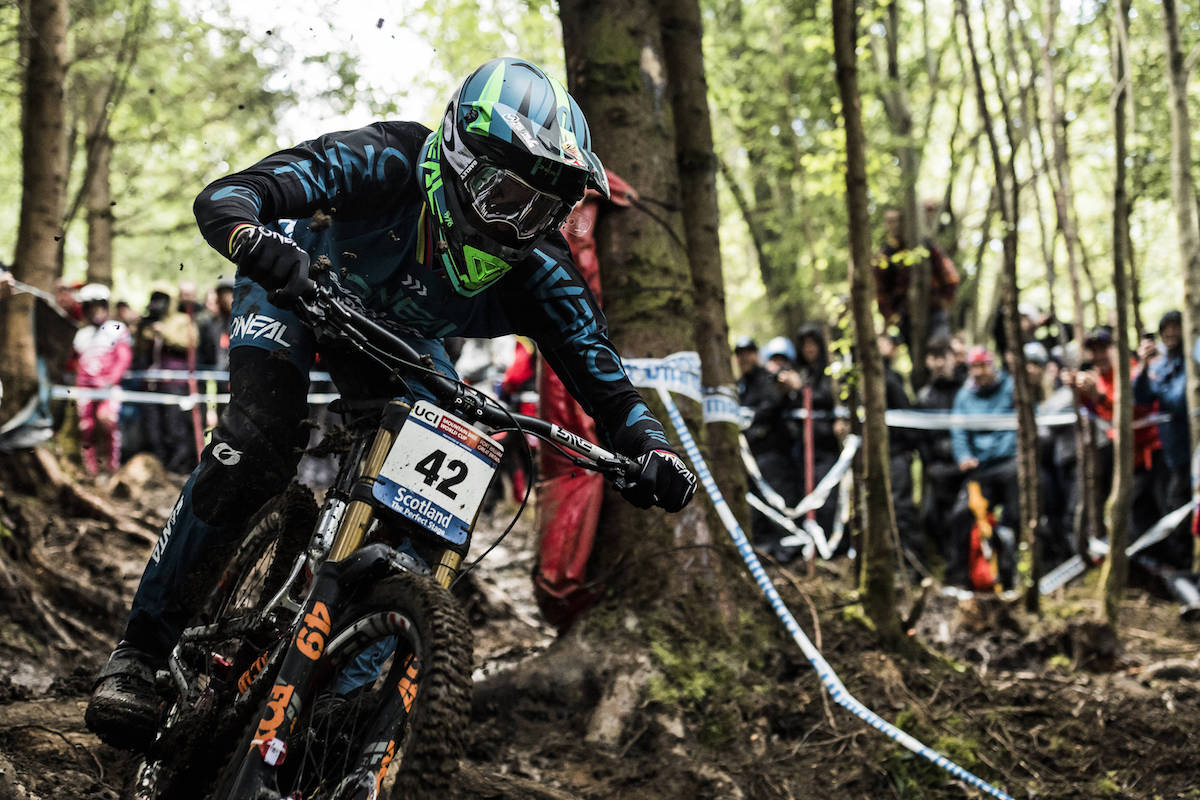 NEWS: MINNAAR IS MADE OF STONE

NEWS: MINNAAR IS MADE OF STONE

BEHIND THE SCENES AS SOUTH AFRICAN

There are few relationships in mountain biking such as that between veteran downhill racer Greg Minnaar and the imposing grey hell of Fort William. This year, the legend was to grow still further.

There are very few places on earth where the weather changes so quickly and unpredictably as it does at this iconic downhill course in the Scottish Highlands.

A long line of fans patiently ditch sunglasses and pull on their rain jackets only to receive a thorough five-minute soaking before the scorching hot sun breaks back through and brings with it yet another wardrobe reversal.

There isn’t one complaint from the throng however as they’re standing in line for an audience with greatness.

You have to feel for the other two riders sat alongside 35-year-old Minnaar. Sponsored by the same clothing manufacturer and virtually half his age, they fiddle with marker pens and politely attempt to enjoy being almost completely ignored.

Minnaar, the tall, wiry South African has been the big draw for a long time now (he won his first UCI World Cup race as far back as 2001) but his performance between the tape during the day’s qualifying session has added a renewed buzz to the queue.

The Santa Cruz Syndicate rider qualified his new V-10 29er bike into first position for a race which he had won on six of the last 15 runnings. It’s a remarkable figure and virtually unheard of in the sport of downhill mountain bike racing.

The start hut nestles high on the hillside of Aonach Mor and despite the tracks advancing years, it still represents one of the sport’s great challenges. Not only do racers battle exposed yet brutally fast open sections but they also must make it through axle deep mud and roots in the woods and over huge jumps.

The variables and sheer number of factors which would separate rider from bicycle in less than a heart beat are incalculable and amongst all of these Minnaar has stood the test of time.

“Today was only qualifying so let’s not get too excited,” he shrugs with the ring-wise smarts of a boxer who has just scored a first round knock down; it’s nothing more than a good start.

“I don’t know what it is about Fort William, I’m not quite sure…”, he smiles. “I always enjoy coming here. My first proper season of racing was with a UK team (Animal Orange) so I kind of feel like it’s my home away from home. I get to see all the old guys who I used to race with, I’m just comfortable here.”

A comfortable Greg Minnaar, is a fast Greg Minnaar and perhaps more than any rider in the pits he depends upon that perfect bike set up. This season, his team have been pioneering larger diameter 29in wheels and it’s clearly agreeing with the 6ft 3in Minnaar.

“We’ve pushed quite hard to get the bike going and I think it really suits me,” he says.

“I look back at all my years of racing and I now feel that I’ve always been riding the wrong size of bike. Now I’ve got one that just feels so much better, it just fits me. I now feel so much more comfortable going into technical sections, going to the inside in corners, going through the rough. It’s definitely a comfort thing for me.”

Bigger wheels haven’t been warmly welcomed by everyone however with many of his rivals claiming them to be an unfair advantage.

“What’s really surprising though is how such a little change in the bike has created so much whining. I don’t understand it,” Minnaar shrugs. “No-one was whining when we went from 26in wheels to 27.5in wheels so I don’t really know why they’re whining now?!"

“I think a lot of it may be to do with how so many of the brands may have been struggling to develop these bikes and they didn’t manage to push through and actually get them on to the track. Why go through all that development and not put them on track? Why not race it and prove that it’s good?

“Twenty-nine inch wheels have been around for seventeen years, they’re not a new thing. Some people are just scared of change. You still have to get it down the track and get it through those woods which is a hell of a gnarly ride. It doesn’t really matter what bike you’re on, you still need to get it to the finish line.”

“The team is clicking really well, I’m enjoying being with the young guns,” he smiles. “People think that they’ll be looking to me for guidance but in actual fact, I’m looking at them. They come from a different era of riding and how they set things up is very different so I always try to change and adapt to the times. I pulled a bike out recently that I raced on five years ago and the set up is completely different.”

Come race day, the finish arena at the bottom of the Nevis Range swells with fans. The start hut is a tiny dot on the hillside in the very far distance and the idea of someone making it from top to bottom on a bicycle in under five minutes seems to verge on the ludicrous.

The new wood section begins to claim bodies. Some of the world’s best are demoted to paddling through, legs flailing everywhere in an attempt to maintain forward momentum whilst others are simply spat to the floor.

The tension mounts and young Australian, Jack Moir, sits in the hot seat. The splits indicate that Vergier has gone down. Now there is only one man left at the top.

Assembling a career highlights reel for Minnaar will be a logistical nightmare. What moments from his three-time World Championship-winning career to include will be nigh on impossible but his assault on the woods of Fort William in 2017 will without doubt warrant inclusion.

Like most incredible race feats, to truly appreciate it’s brilliance, one must compare it to those who ran before him. The speed was visibly higher but where some muscled, Minnaar finessed. Minuscule, barely perceivable corrections to the handlebars and minute shifts in body position hooking the big Santa Cruz up through the slop.

The crowd roared him on as one of their own, it was the epic battle between prize bull and seasoned matador. Minnaar crossed the line 2.9 seconds faster than anyone else. He locked up his wheels and fell to the ground exhausted.

Fans and teammates broke the barriers and engulfed him in jubilation. He’d later admit that he feared that he might suffocate such was the physical effort he’d just expelled; it was the most physically torturous run of his career.

“It started raining when I was at the top,” he sighs. “I wasn’t worried about the track as it’s actually slightly faster in the damp. It was my vision that I was worried about.

“I knew that I had to push so hard because time-wise I had to make time to find a space to sit down and pull a tear-off from my goggles. I really worked hard up top. I pulled it just before I entered the woods, got moved around a bit then had to get right back on the pace again at the bottom. It was super tough.”

Win number seven was in the bag and one of downhill’s favourite and most successful sons had once again triumphed in one of it’s most special venues.

‘Super tough’ is what Fort William is all about and perhaps the only thing tougher than it’s razor-sharp granite is Greg Minnaar, who now boards a flight to the third round of the championship again resplendent in the points leader’s jersey.