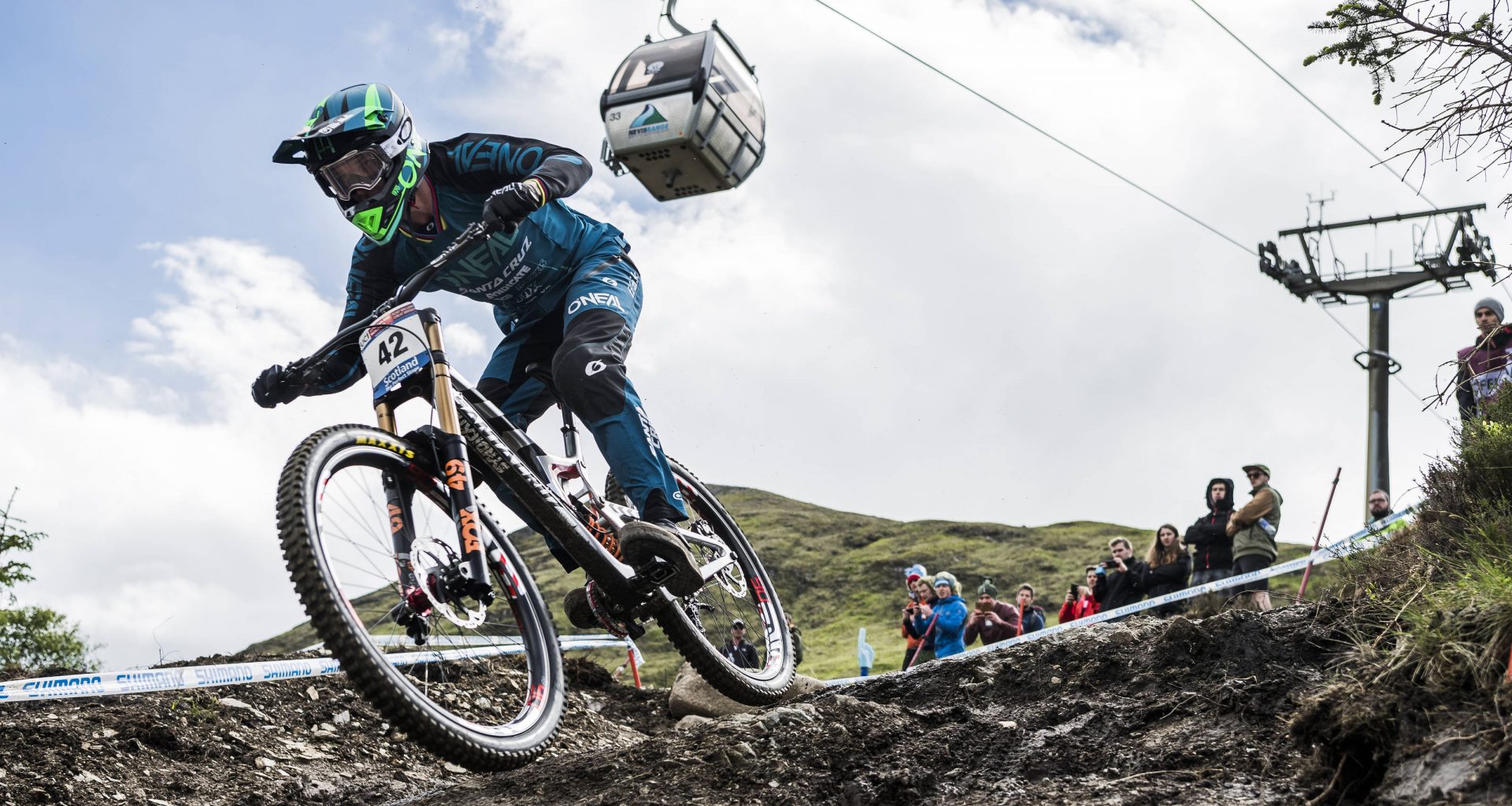 Australia’s Tracey Hannah and South African Greg Minnaar have won their respective races at round two of the UCI DH World Cup.

The grey strip that winds itself down the slopes of Aonach Mor, just outside the Highland town of Fort William, is one of the sport’s longest running and most established venues. Year after year, it produces classic races which live long in the memory.

In the women’s race, the drama got underway before the racing had even begun. Rachel Atherton, undefeated in 14 races, crashed in practice and dislocated her shoulder. Despite putting it back in herself on the side of the track, the Briton was on her way to the local hospital to be evaluated. The Champ was out, her reign of 14 uninterrupted UCI World Cup wins was over and a win was up for grabs.

The newly revised woods section was chewed up and rutted almost beyond recognition after repeated rain showers and busy practice and qualifying sessions. Getting through it in one piece and still pointing in the right direction was potentially going to make or break everyone’s race.

Switzerland’s Emilie Siegenthaler was one of the first of the big names to really lay down a solid run but was dislodged by French woman Myriam Nicole who was looking good to claim her second ever UCI World Cup win. That was right up until Hannah took to the track. With the World Championships visiting her home town of Cairns later in the year, Hannah was more than up for the challenge and promptly proved her point and completed a run 10.245 seconds quicker than Nicole’s with Siegenthaler holding on for third.

Hannah said: “It is unbelievable. I never came to Fort William expecting to beat the British riders as they are amazing on every track but especially ths one. Obviously I feel for Rachel being out.

“I just put everything out of my mind, and did the best run that I could do. It was hard and I wanted to stop pedalling but I just had to keep pushing.”

In the men’s race Troy Brosnan stormed into the lead with what looked to be an immaculate run. Newly-crowned Australian national champ Jack Moir was next into view and much to the roars of his team, took up residence in top spot.

But tall South African Greg Minnaar had won five of the last 10 races on the iconic hillside and wasn’t about to shy from adding another. He danced his way across the exposed rocks of the top section and nailed the woods. When he crossed the line he had gone 2.979 seconds faster than Moir and was duly mobbed by his team and adoring fans.

Minnaar said: “I didn’t think luck was on my side today as it started raining quite hard at the top. I tried to ride hard knowing the track was pretty wet. This was the toughest one for sure, I worked hard for this one."

The season continues at the third round in Leogang, Austria next weekend 11th June