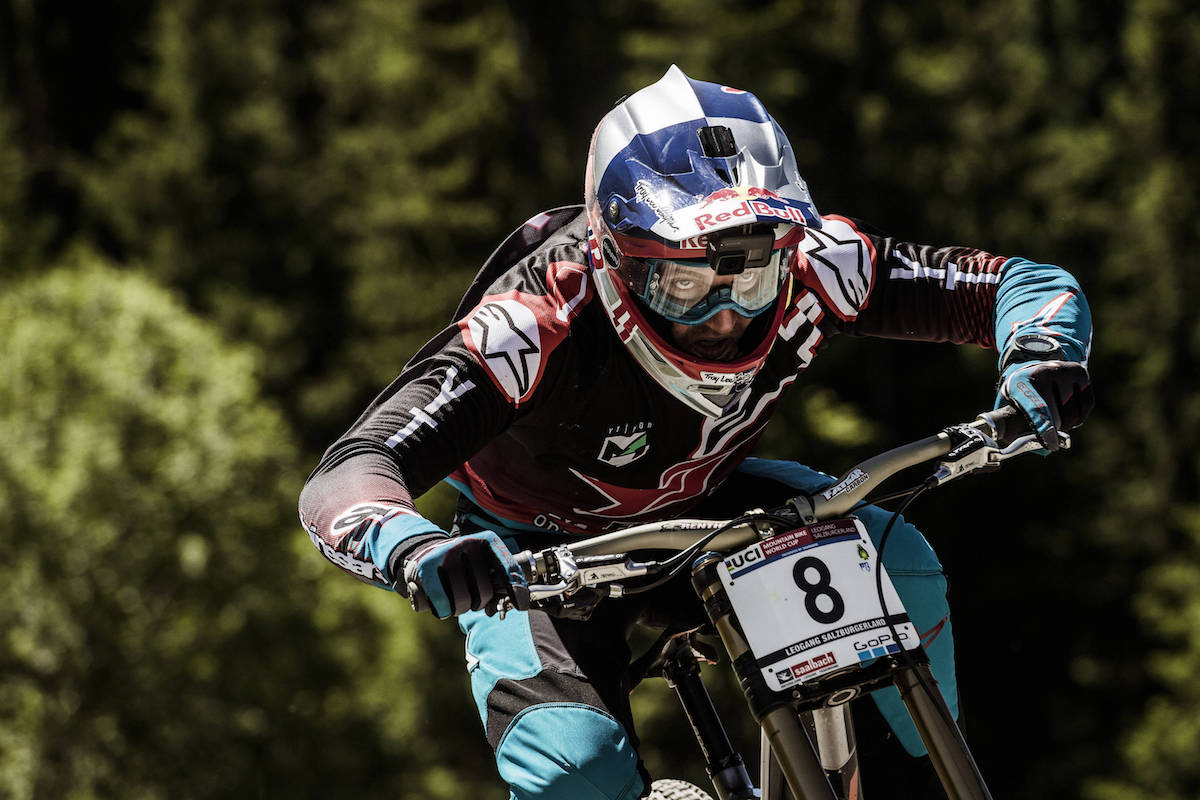 ON SITE WITH US MOUNTAIN BIKER AARON GWIN

AS HE TAKES HIS THIRD WIN IN LEOGANG

The Austrian Alps are an awe-inspiring place; shafts of rock thousands of meters high threaten the sky itself as bands of cloud slip across their snowfields. Lower down, the late spring meadows shimmer as the mountain breeze pushes waves of emerald green gently across them. But despite the idyllic backdrop, it’s nevertheless a place of extremes. Aaron Gwin  knows this more than most.

The UCI World Cup track in Leogang, just outside Saalfelden, is one of the most talked-about venues on the calendar. Based in the bike park, many see it as lacking technical tests relative to the other venues but Leogang does offer one thing, above all else: speed. Its challenge lies in hitting the man-made wall-rides and bermed corners at eye-watering velocities. It’s about punching into the blue, pushing the envelope and taking bikes and equipment to levels above and beyond what manufacturers can model. To win in Leogang you will cross the line having taken every risk and rolled every dice.

Gwin, more than any other rider, is synonymous with this track. In 2014 a tubeless tyre exploded from his rim and he proceeded to ride the rest of the track with it flailing around behind him. The following season, his chain broke right out of the start hut yet again he didn’t give up. Via a feat of bike riding for the ages, he won the race by the narrowest of margins.

“How was it without a chain? A helluva lot easier than without a tyre!” he joked at the finish.

In 2016 he arrived on a brand new bike as part of a brand new team and took the win again.

During Saturday’s qualifying session for the 2017 installment, Gwin had slotted into pole position ahead of series leader, Greg Minnaar.

“It was pretty good. It took a little time to get going; there was a couple of lines that were on the edge of being blown out at the end of my last practice run and I was kind of hoping that they’d still be there and be OK for this run. They weren’t!” Gwin smiles in the baking Alpine sun.

“So I made a couple of mistakes up there but nothing too crazy. I was able to keep the flow and got it gathered together towards the bottom. All good, I’m pretty stoked with my time considering how the top went so I think I can tidy that up and it’ll be on for tomorrow.”

The Californian’s affiliation with Leogang is more than just circumstantial however; if there was a track made for his strengths then this could be it.

“Yeah, I think it’s awesome, I really like it,” he says. “I think it’s awesome to have a track that is really fast like this; it’s more about being precise and hitting your marks. It’s a bit like moto or BMX, it’s about carrying speed. It’s not one of those tracks where just because it’s fast it’s about who can hang it out the most. It’s the opposite; if you hang it out here, you’ll slide out and make a mistake.”

Sliding out and making a mistake is exactly what happened to him at the previous round in Fort William, Scotland. Up at the splits and on course for a likely unassailable time, he went down just out of sight of the TV cameras.

“They cut from camera to camera and the commentator said “He won’t mess up from here!” and I literally crashed one second after he said that!” he laughs.

“I was stoked to put together a really good run there, despite that crash but I think that third place, with a crash, is alright!”

Minnaar had won his third Fort William in a row, could Gwin do the same from the same qualifying position? The omens were good; young Frenchman Loris Vergier was in the hot seat, just as he had been 12 months previously. As the American left the start hut, every eye in the finish area focused on the clock. It turned red, Gwin was down by just two hundredths of a second. There was work to be done and once the Stoana Mää jump section was dealt with, he was half a second in the lead, by the bottom he’d increased it by nearly a full second. The crowd roared and Gwin’s team made the sprint from their enclosure across the dusty finish area to the victor.

“I love racing! It’s been about a year since my last win. I made some mistakes at the top again, I absolutely reamed by hand on a pole at one stage but dude, it was a race run! It was so sick!”

Minnaar would finish third, enough to keep his points leader’s jersey but the stage is now becoming set for a head-to-head battle with Gwin in the second half of the season. If the last two rounds were anything to go by then it could be a classic.