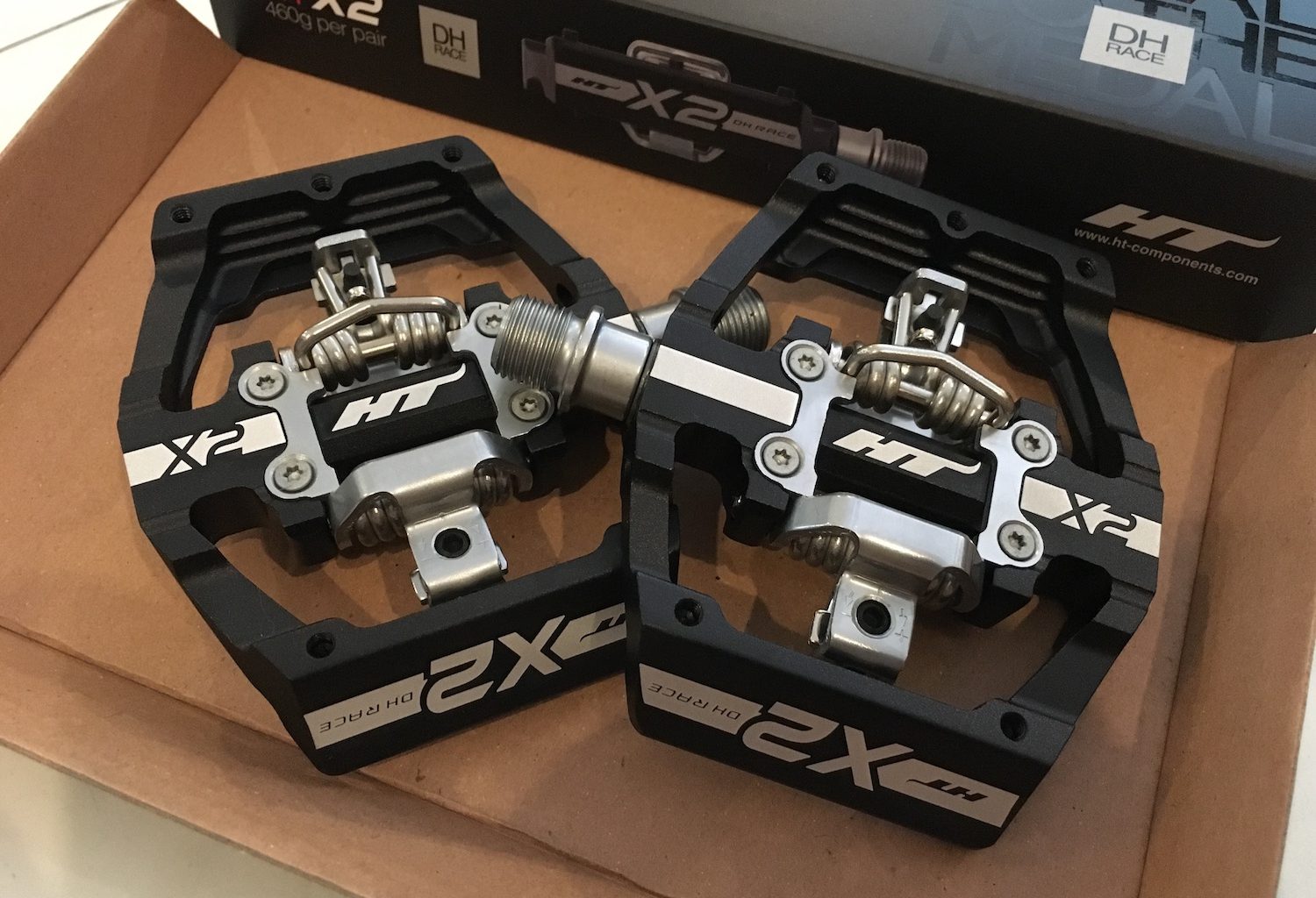 HT is no stranger to the cycling world. A well known Taiwanese brand for bicycle pedals that's well trusted amongst cyclists around the world. And with the signing of UCI Downhill Champion Aaron Gwin into the HT Pedals sponsorship, the brand name had seen another surge in popularity and demand for its products. We got our hands on a pair of HT X2 Downhill Race pedals with big thanks from local HT components distributor Bike31. Let's take a first look at these shiny black metal.

Taiwan has been the world's top 3 exporters of bicycles and bicycle components for as long as we remember. And when it comes to high quality bicycle products, Taiwan (OEM) products has since earned their well-deserved reputation. With their headquarters in New Taipei City, Taiwan, the HT development team in Taiwan works closely with their factory in Shenzhen working from design to end product with focus on product quality and competitive selling price. Currently HT produces bicycle pedals and spokes for a wide range of end users – bicycles and beyond.

Hsing Ta Industrial was founded in 1954 and regarded as one of Taiwan's bicycle industry grassroots pioneer. The brand name HT was founded in 2005 to showcase and market the company's range of high end pedals.

In 2013, HT signed with a hoard of the best riders in the biking world, including names like Aaron Gwin, Antoine Bizet, Kyle Strait, Commencal Vallnord DH Racing, Brian Lopes and many more. (Check out the list below)

The HT Downhill clipless X1 pedal was launched in 2014. And in that same year, Aaron Gwin won at Pietermaritzburg, South Africa mashing on the HT-X1. It's the rider? Or the bike? Or the components on the bike? We think everything works together as a system. But we cannot overlook the fact that half of the rider's contact with the bike lies on the pair of pedals. It's grip, feedback, technical performance and behavior, reliability are all important factors to secure that podium position for the racer. In short, a good pair of pedals give the rider the confidence and instill in him or her the trust when it is needed most. Seems like the HT Downhill X1 had proven itself in the UCI race scene.

On first impression, the HT X2 Downhill Race is sleek and neat, with the black finishing giving it a strong aggressive look. The pedal body is large at 85 mm x 94 mm x 14 mm, is CNC machined from extruded aluminum with CNC machined chromoly spindle and weighs in at 460 grams. The cleats add another 64 grams to the overall weight. For reliability and durability, the pedal uses the new EVO+ bearings system. The grip pins on the pedal are replaceable. The X2's clip-in mechanism has adjustable tension and multiple cleat options providing both 4-degrees and 8-degrees of float with a 13-degree release angle.

Just in case anyone ask what the EVO+ Bearing System is, it is simply a set of needle bearings and IGUS bushings.

The HT X2 Downhill Race also comes in titanium spindle option (Model: HT X2T). While they are ligther, they also have a lower weight tolerance, at 85 kg max.

We will be back with a full review of the these downhill pedals soon. Meantime, if you wish to get your hands on these pedals first, check out these local HT dealers.

HT Components are distributed by Bike31