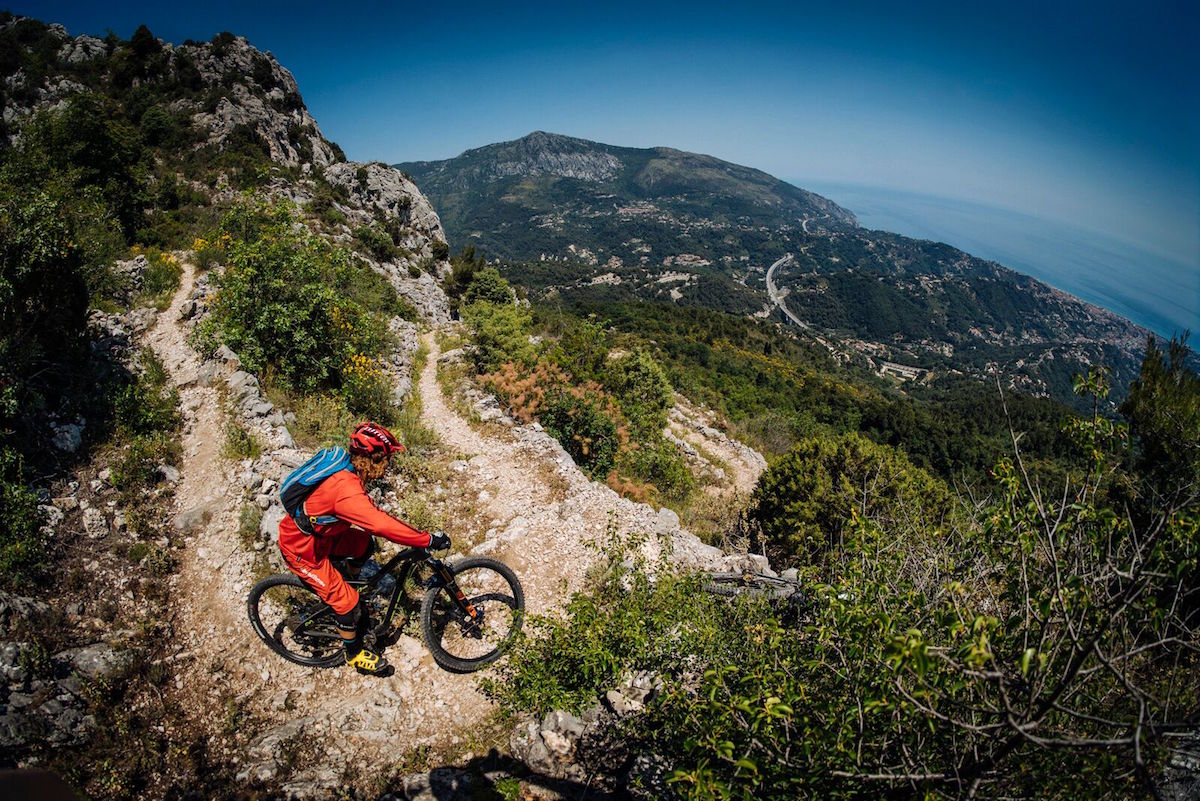 We continue with the 2nd part of the week long true mountain biking adventure – Trans-Provence 2016! Here's to more breathtaking scenic trails, grueling stages and indescribable satisfaction followed by some much deserved celebration. Check out the videos of each stage!

Day 4 of Mavic Trans-Provence 2016 was a short, sharp blast (by TP standards!) for riders as they dropped huge elevation from camp in Valberg, the first three stages and liaisons plummeting 1,400m before a shuttle and climb back up to 1,600m elevation.

From here, in the time it takes to say 'skids are for grown kids,' the course then plunged 1,000m via loose, loamy and at times exposed trail to arrive at the bar – a firm staple of TP days – in time for a late lunch of beer and ice cream (proper mountain biker nutrition).

Mulling over the somewhat raucous morning – the ride ended several hours earlier than the previous day – most riders were surprised how tired they were. USA’s Marco Osborne (WTB/Cannondale) put it down to the extreme concentration levels in the long, rock-concealing grasses; Switzerland’s Ludo May (Canyon Factory Enduro Team) decided it was the heavy braking on the steeper gradients; UK's Bry Watt (Booze Cruise) put it down to straight fear (exposure is an element of any TP race).

With the loose ground conditions and high consequences, anyone would think the pros might have ridden well within their limits. The results sheet shows otherwise though – the first five were within 25 seconds over more than 23 minutes of timed stages.

Overall race leader Nico Lau (Cube Action Team) did suffer today, however. The French rider took a spill on Stage 15 (the third special of the day) and lost vital seconds in his assault on the race overall. Francois Bailly-Maitre pounced on this opportunity and took the day’s win, in doing so cutting his overall deficit to Lau to 18 seconds. The two Frenchmen are at heads as we move into the last two days of 2016 TP racing.

Having suffered mechanicals in the first days of racing, the UK’s Mark Scott (Santa Cruz x SRAM) found his form on Day 4, finishing the day a joint 2nd with France’s Yoann Barelli (Giant Factory Off-Road). Matti Lehikoinen (Nukeproof/Mavic) took a stage win on 15 and 4th on the day, with Marco Osborne rounding out the top five.

The battle in the women’s category continues among Ines Thoma and Carolin and Anita Gehrig, with Anita taking the Day 4 win, Carolin 2nd and Ines 3rd. The overall is seriously hotting up – just 14 seconds separate Ines, Carolin and Anita, in that order.

Day 5 of Mavic Trans-Provence 2016 set off bright and early from Valdeblore in a bid to make it over 65km to the final mountain camp of the event in Sospel.

The day’s stages took in a range of terrain from super tight switchbacks up high to wide-open speed nearing the end. The surroundings were just as varied too – from vibrant forest early in the day to near desert later. It truly was a day that epitomised the spirit of TP racing. Those 4,300m of descending won’t be forgotten soon.

Having tightened up at the top in the overall standings after Day 4, reigning TP Champ Nico Lau seriously stepped on the gas on Day 5. Lau’s crash the day before clearly did not phase the Frenchman as he put the hammer down to take three of four stage wins. A navigational error on Stage 18 looked to put his lead in jeopardy once again, but it seems he built such a buffer over the other three stages that he needn’t have worried. Lau won Day 5 by a full 20 seconds.

Nico continues to lead the overall from Day 5’s runner up Francois Bailly-Maitre; his dominant riding opening the gap to over 30 seconds. Bailly-Maitre is going to have to work hard to close down on Lau on the final four shorter stages. Marco Osborne remained consistent to take third on the day and the same position in the overall, with Gustav Wildhaber and Greg Callaghan rounding out the day’s top five.

As with the men’s racing, Ines Thoma also took the opportunity to stamp authority over the race, winning Day 5 by 23 seconds to second-placed Anita Gehrig. Katy Winton upped her game having ‘learnt to ride switchbacks’ during her week with TP, and rounded out the top three. Ines’ lead over Gehrig sits at an impressive 37 seconds – although that is over a combined time of nearly three hours of stage racing this week!

MAVIC® TRANS-PROVENCE 2016 /// SEE YOU AT THE BEACH! from Mavic® Trans-Provence on Vimeo.

With five full-on days of Mavic Trans-Provence already in the bag, racers set off from camp early on Friday into the full Southern heat for a day of fast-paced action and race-defining stage results.

Stage 21 took riders into the trees in central Sospel for a short, rapid blast back to town on buff singletrack – yet another change in terrain from the previous day. The second stage of the day (22) was another ‘best of the week’ – many racers commented on the perfect dirt and endless turns that dropped quickly through the steeply sloped forest. The next liaison then took riders south as they edged closer to the event objective – the sea. Stages 23 and 24 – the final moments of Mavic Trans-Provence 2016 – dropped off the side of the Maritime Alps as riders made the final descent through the busy streets of Menton to arrive at the coast for a well-earned beer and swim.

The final day of racing would give two underdogs their chance to have a last say in the TP ’16 results. Yoann Barelli (FRA) and Katy Winton (GBR) put it all on the line, with 18- and 4-second wins respectively. Gustav Wildhaber (SUI) and Nico Lau (FRA) took the next two podium places in the men’s, likewise Emily Slaco (CAN) and Anita Gehrig (SUI) in the women’s.

After Nico Lau’s crash on Day 4 and navigational error on 5, his fortune was to turn as the six-day event drew to a close. Lau already held a commanding lead on the overall, and a clean day of racing with no mistakes secured his fourth Mavic Trans-Provence victory in as many starts, with a margin of victory of nearly 40 seconds.

Nico asserted his finesse as the world’s most decorated multi-day stage racer, but we shouldn’t forget the great ride of second-placed Francois Bailly-Maitre (FRA), whose two-minute buffer to third made him the only racer in the same league as Lau. Gustav Wildhaber rounded out the top three, a superb result for Lau’s Swiss teammate, with Yoann Barelli climbing to fourth and Marco Osborne (USA) suffering on the final day to finish fifth.

The women’s category has been a weeklong battle of three, with sisters Anita and Carolin Gehrig both fighting a strong Ines Thoma (GER) for the overall. The three all took day wins during the week, but when the final times were added up it would be Anita’s consistent ride that would carry her to the prestigious Mavic Trans-Provence win.

It has been a monumental adventure for every one of TP ‘16’s competitors. From high Alpine to bustling coastline, snow to sea, Mavic Trans-Provence 2016 has been one of the most memorable of the 8 events so far.

Here’s to many more journeys through the European mountains.

Photos and videos by Mavic© Trans-Provence