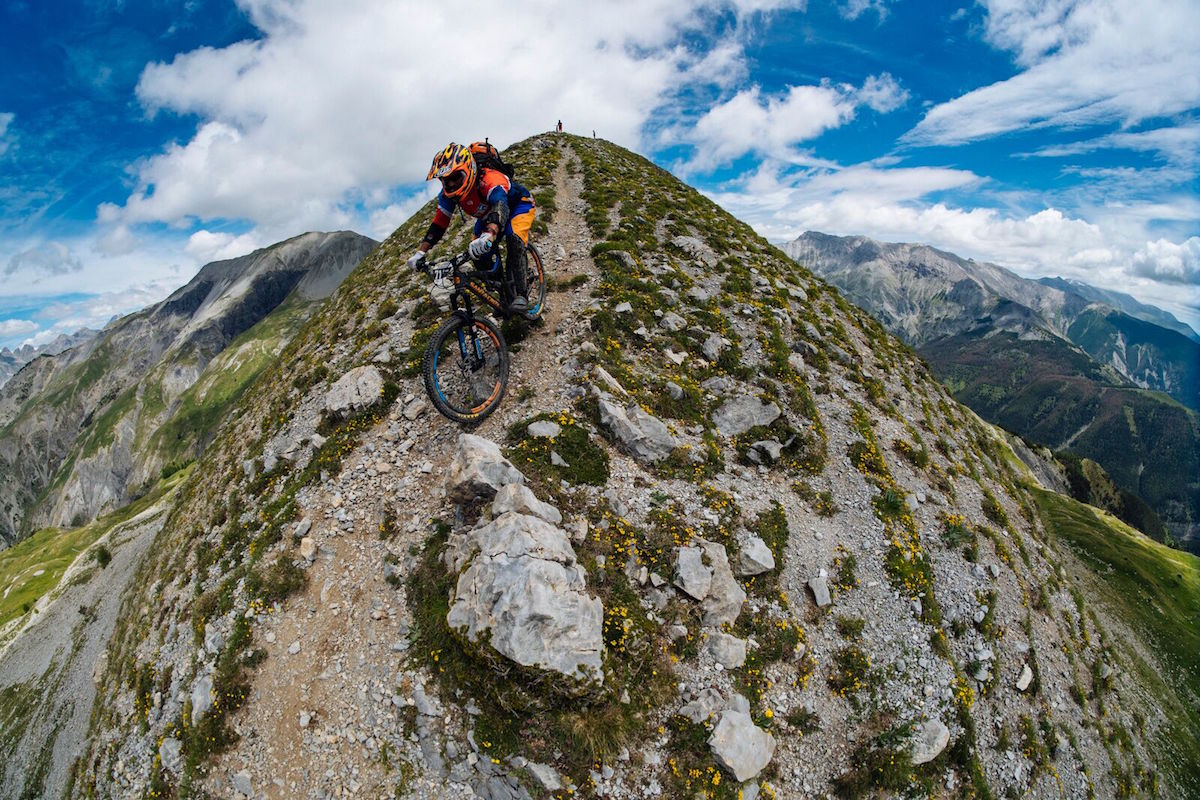 Trans-Provence is a manifestation of what mountain biking is all about; a melting pot of the sport's finest ingredients. In physical terms, this means a week-long itinerary of true mountain wilderness, a huge and varied catalogue of awesome gravity-fuelled singletrack from the High Alps to the Mediterranean Sea. The event was launched in 2009 as a rally-style race which many past participants will recount is more about the adventure than the time on the clock. Trans-Provence is now into its 8th edition. Bikezilla will be publishing a 2-part artticle on a day-by-day account of the event. Feel the adventure!

DAY ZERO: AS IF BY MAGIC (ROCK)

The best time of the year is here again – that day when riders from around the world pitch up at Camp Zero and race director Ash Smith finally gets to crack into a can of Magic Rock (*event sponsor plug*) with the year's Mavic© Trans-Provence family. They are toasting the 8th edition of the event and welcoming a host of top international riders, including: Nico Lau (FRA), Marco Osborne (USA), Greg Callaghan (IRL), Mark Scott (GBR), Bry Watt (BEER), Jamie Nicoll (NZL), Matti Lehikoinen (FIN), and many more.

DAY ONE – IN AT THE HIGH END

MAVIC® TRANS-PROVENCE 2016 /// IN AT THE HIGH END from Mavic® Trans-Provence on Vimeo.

Covering 38km through snow, mud and dust, from peaks to valleys and comprising over 2,500 metres of descending and nearly 1,700m of climbing, Day 1 of the 2016 Mavic© Trans-Provence certainly got things rolling in the true spirit of the event.

Waking to a fresh coating of snow on the mountains, racers left Camp Zero knowing the day was not going to be easy. But with four special stages that took in just about every trail condition possible and one or two classic Ash Smith (race organiser) obstacles – including a battle across a raging mountain stream – and ending with a high speed ridgeline blast into loamy fresh turns to wrap things up for the day, the effort was more than worth it.

Racing this event is all about playing the long game, and sometimes those who are leading early in the week won’t necessarily be at the top of the results sheet at the end of it… however, you’d be hard pressed to bet against class act and race leaders after Day 1 Nico Lau (Cube Action Team) and Ines Thoma (Canyon Factory Racing).

Things are tight at the top though, and Nico’s early lead will be hunted hard by second-place Francois Bailly-Maitre (BMC Factory Trailcrew), who took a dive into the river yet trails Lau’s time by only 12 seconds. The USA’s Marco Osborne (WTB/Cannondale) races the event for his first time and was looking absolutely on fire on course; he sits in third after Day 1.

Ines Thoma is racing ‘for the adventure’, but it doesn’t seem to have affected the German rider’s speed. Carolin Gehrig (Ibis) sits in 2nd, 15 seconds back from Thoma after Day 1. Her sister Anita Gehrig (Ibis) has a further deficit of 30 seconds, finishing third after the first day.

MAVIC® TRANS-PROVENCE 2016 /// THE ALPINE VERDON from Mavic® Trans-Provence on Vimeo.

With memories of Day 1 of Mavic© Trans-Provence 2016 racing’s snow and cold rapidly fading, racers instead battled the beating sun as they took on four physical stages, with the race moving from Barcelonnette to Villars-Colmars.

The morning shuttle took riders up the twists and turns of the staggering Col d’Allos road, which snakes its way uphill as it clings to the vertical mountainside, summiting at 2,200 metres and ready to start the warm-up traverse.

From the first special of the day – Stage 5 of the weeklong event – things got tough, fast. A combination of what in the past was two separate stages, both were linked into one monster for 2016. It was a demanding way to get the day started – classic TP. And things wouldn’t get much easier, especially on the arduous 650m climb from 6 to 7. It would most certainly be worth it though – at 11m 28s for stage winner Nico Lau (Cube Action Team), and carving its way though the stunning forest before rocketing across the 45º lower slopes, Stage 7 made for the sort of trail that racers will remember for life.

The day’s route finished with a final loop out into the wilds and a ‘short’ five-minute stage to bring riders home to camp in the Villars-Colmars valley.

In the men’s racing the top of the results sheet showed Nico Lau once again forging ahead from the rest, taking three of the four stage victories. The one remaining stage win went to a flying Gustav Wildhaber, who took 2nd place on the day with Francois Bailly-Maitre in third.

Lau extends his overall 2016 TP lead from Bailly-Maitre, and he goes into Day 3 with nearly a minute buffer over his compatriot.

Ines Thoma remains at the top of the women’s results sheet, although it looks like she may have a fight on her hands as Carolin Gehrig edged beyond her to take the day’s win and solidify her 2nd place in the overall race standings. Gehrig now sits only seven seconds behind Thoma.

DAY THREE – GREY EARTH & BIG VERT (THAT WAS THE BEST. TRAIL. EVER.)

From their overnight stop in Colmars, 2016 Mavic Trans-Provence riders took another early start to shuttle into the high mountains from where Day 3’s 48km tour would start.

Dropping in to the first special of the day, Stage 9 (non-timed), riders took a freefall deep into the valleys of the Mercantour Park, from where the real work would start. Stage 10’s access climb had been the talk of the previous night – it had definitely made an impression on those who rode the event in 2015!

Beginning with 400 vertical metres of moderate-gradient pedalling, riders were taken in to the higher reaches of the Park and an area of great natural beauty only accessible by one’s own power. Flowering meadows, long grasses, enormous views and nature at its greatest made the climb pass quickly for the majority of riders. Even for those tiring at the mid-way point of the TP race it would all be worth it when things started to point downward.

‘One of the best stages ever’

These comments reflect the feelings of more or less every rider who rolled into the mid-race feed station.

Things didn’t get any less epic as riders moved down to lower altitude trails for the afternoon. Stage 11 took an altered route through the famous Grey Earth area before a hike-a-bike took riders back to altitude to finish the day with the endless series of tight switch-backs that was Stage 12.

While Nico Lau’s lead in the overall race standings remains untouched, Day 3’s result shows that he could have a race on his hands as we move into the second half of the week. Yoann Barelli lit things up and put 12 seconds into Lau, in doing so taking the day’s win. Lau, in 2nd, had American Marco Osborne nipping at his heels just six seconds back in third.

The previous day's winner women’s winner Carolin Gehrig had to settle for 3rd on Day 3 but the winning streak stayed in the family, with her sister Anita taking the day win. Ines Thoma had to settle for 2nd on the day, but retains her lead in the overall standings.

To be continued in our Part 2 of MAVIC TRANS-PROVENCE 2016: A WEEK-LONG ITINERARY OF TRUE MOUNTAINB BIKING

Photos and videos by Mavic© Trans-Provence