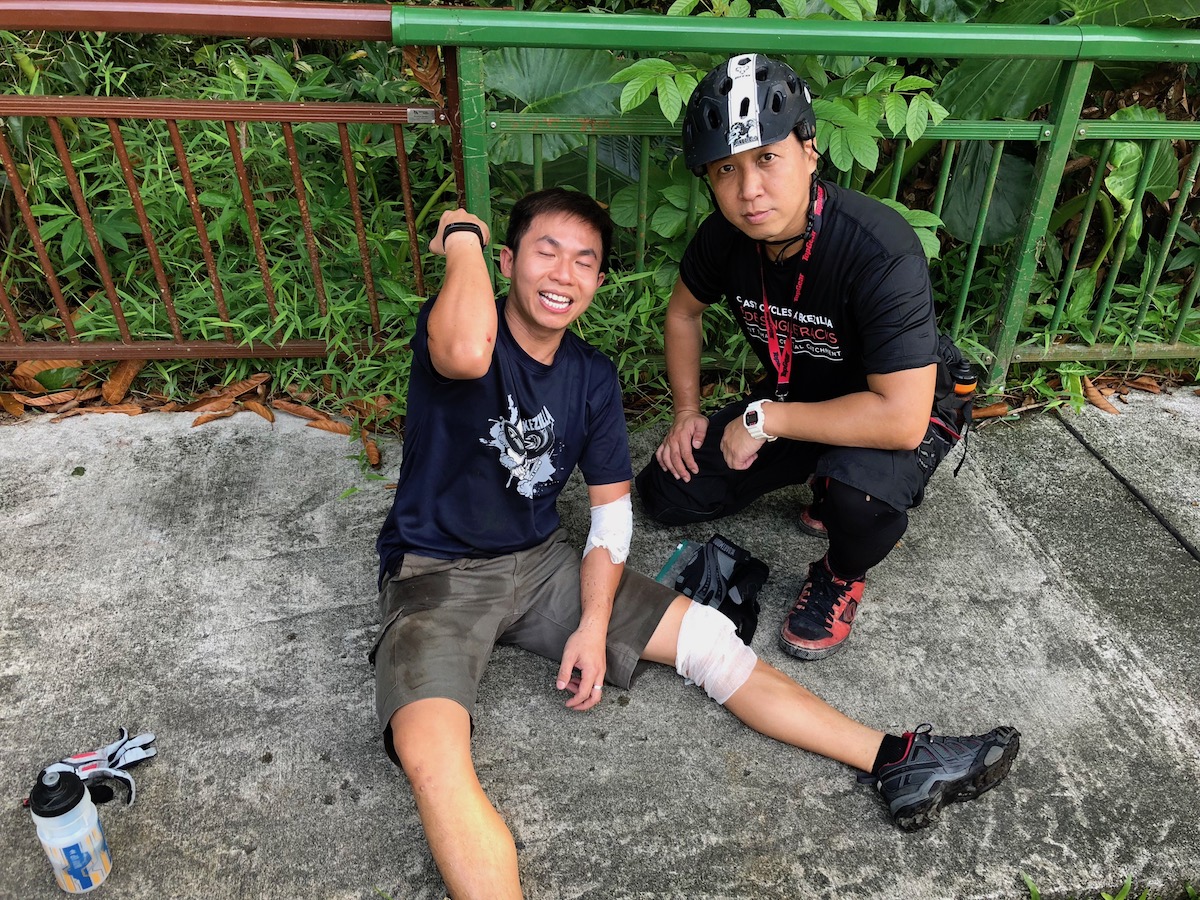 FOOD FOR THOUGHT: WHEN SH*T HAPPENS

FOOD FOR THOUGHT: WHEN SH*T HAPPENS

IS MOUNTAIN BIKING REALLY THAT DANGEROUS? OR IS THE DANGER ALSO FROM OUTSIDE OF THE SPORT ITSELF?

Mountain biking – a sport that the uninitiated regards as "dangerous" and rough, reserved only for those who love taking risk and extreme sports. We know this is a misconception. As long as we learn the right bike handling skills, observe trail etiquette, ride on trails that are reasonably maintained and be prudent when taking calculated risk, every ride would be just pure fun with very little risk. Life will be nearer to perfection if things as as predictable as this. Sometimes, it is really beyond our control.

BEING PHYSICALLY AND MENTALLY PREPARED

Being well prepared is a good start. And we are referring to preparing ourselves before a ride. Physically and mentally. As mentioned, we should have the relevant bike handling skills, observe trail etiquette, ride on designated trails and not take unnecessary risk. In addition, we also need to possess a positive attitude for learning and improving ourselves.

While we may have the above few pointers etched in our memory and fully internalized, we need to remember a (most) important point. In fact, we should be in this state of mind when doing everything else in life too.

We need to be ALERT.

Staying alert could save lives!

During a recent Bikezilla Mass Ride, one of the participants had an incident.

Now, CK is an experienced biker who has no less than 10 years of weekend mountain biking saddle time. He is also capable of tackling our local double black diamond trails capably.

At a recent mass ride, he was one of the riders in the group led by our lead rider. (A lead rider's role is to regulate the speed of the riding group, ensure safety and lead the group in the planned riding route.) And since he was riding with the mass ride group, his speed was comfortable and he wasn't speeding nor rushing. He was riding along the trail (Senapang Road) in the direction towards Rifle Range Road which would later branch out to Senapang Lane towards Bukit Timah Visitor Centre. This section, as we checked with National Park Boards' Bukit Timah Trail map, is NOT a hiking trail. But it is usually trespassed with many hikers, in some cases big groups walking in the middle of the trail.

On the day of incident, 2 elderly hikers were walking along Senapang Road in the direction away from Rifle Range Road when CK was approaching them on his mountain bike. Both parties would have seen each other.

As the mass ride group had rode some distance, it is natural to have the riders spacing out from each other. Although CK was still in the riding group, he was spaced out from the front and rear rider. In other words, he was alone when he was riding that section.

As he approached the 2 hikers, one the hikers, an elderly man swung his arm and it hit CK's handlebar. That got him by surprised as he was sure the 2 hikers would have seen him and he was riding in the middle of the path. The swing caused him to lose balance, crashed and he suffered some abrasions on his limbs.

We will not continue to discuss whether the elderly hiker did that on purpose or otherwise (as per CK's wish). What we wish to highlight here is that freak accident like this can happen even to an experienced biker. We cannot be sure if CK has been on full alert but we can be sure that anybody in CK's shoes would have been caught off guard by such a sudden action too.

CK did not suffer any fracture and was able to pick his bike and himself up. The hiker on seeing his bad fall, stopped and helped him dress up his wounds. When we eventually caught up with him, he had already completed his Senapang Lane section and resting at Bukit Timah Visitor Centre's car park. We took the opportunity to check his wounds and ensured that he did not need further first aid medical assistance before he decide to fall out from the mass ride to clean up his wounds at a medical center.

This episode got us thoughtful over a few things.

CK had since recovered from his abrasions and had returned back to his regular trail rides.

The nature reserve is big enough for everyone. Let's respect each other's interest and have fun together. Meantime, mountain bikers, stay ALERT and RIDE SAFE!