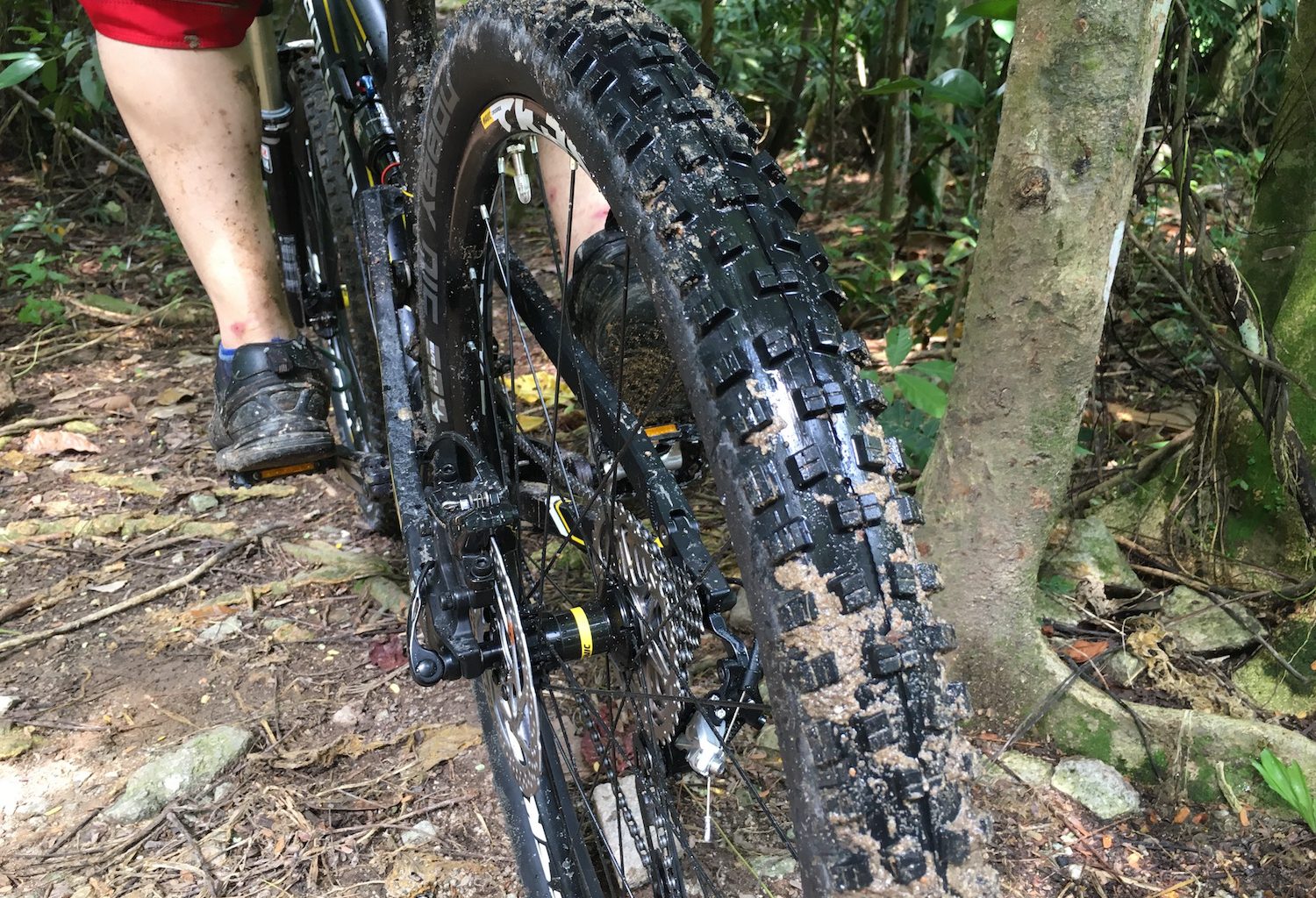 FOR BEST MIX OF SPEED,

TRACTION AND OFF THE TRAIL RIDES?

Some time back, we reviewed the Polygon Siskiu D8 and mentioned that the tyres that it came fitted with were not to our liking – they do not behave that well in moist slippery tropical rain forest during the monsoon seasons. The good folks at Rodalink heard us and sent us a pair of Schwalbe Nobby Nics to swap out the Smart Sams. How's that for good follow-up!? Think you already know our review's verdict? Let us tell you more.

SAM IS GOOD WHEN ITS ALL DRY

We know the Schwarlbe Smart Sam well. It is a fast rolling trail, marathon and cyclocross tyre. In other words, it is really a tyre meant for a mix of tarmac and trails. While it grips better off road than it does on tarmac, it's traction is at best moderate. What it rewards the user is its versatility and efficiency.

On the other hand, for riders who intend to use the Siskiu D8 for more trails than roads, we would strongly advise a change to something more grippy. A look through Schwalbe's tyre list and we singled out the Nobby Nic. It should provide better all-weather traction if we choose the Trail Star compound, and this set of tyres should feel at home with some road or Park Connector rides as well. We would be expecting a tad more rolling resistance as compared to the Smart Sams, but that should be manageable. And we were not planning to race this bike any time soon. Looks like a logical upgrade for the trail-riding biased rider.

German Tyre manufacturer Schwalbe started making bicycle tyres since 1901 and had been building the brand name Schwalbe since 1973. The brand had since been a part of the history of cycling. In recent decades, Schwarlbe has been pivotal to the evolution of mountain biking through their tremendous progress in product development.

Schwalbe's tyre compound are well known amongst mountain bikers. These compounds were spawned from the feedback of notable Schwalbe users through the years and gave rise to a range of tyre compounds of differerent characteristics, serving different terrains and riding styles.

NOBBY NIC IS A QUICK ALL-ROUNDER

The Schwalbe Nobby Nic is not new name to mountain bikers. Touted by Schwalbe as one of the favorite touring and All Mountain tyres, they are often seen at fast paced cross-country races, as well as in technically demanding Enduro competitions. In its third generation form, they are now available with the new SnakeSkin sidewall that makes them more resilient to cuts and blows. Tubeless conversion is also stated as easier and safer than before.

All Triple Compounds are stated to have the same, extremely elastic base compound under the tread that makes the tyres fast. All other desired properties are achieved by placing specially selected compounds in the tread center and on the tyre shoulders. The result is a range of sub products under one tyre model, each bearing a different characteristic. To develop the Triple Star Compounds, six unique compounds had to be created anew through extensive laboratory and practical tests.

“Compounding is an art in itself,” explained Markus Hachmeyer. Any rubber compound contains over 20 different variables. A bit more here, a tad less there and the rolling resistance, or hardness changes. Many factors, such as grip and rolling resistance, actually contradict each other. If one value improves, the other automatically gets worse. Furthermore there are other desirable properties such as damping, durability and cut resistance to take into consideration. Trying to achieve all these features in a single rubber compound at the same time simply does not work! Therefore, combining several unique rubber compounds to improve the counteracting characteristics is the ideal solution."

It is common sense to know that only tyres with sufficient inflation pressure can bear the weight of a bicycle. And that the higher the inflation pressure the lower the rolling resistance of the tyre. The susceptibility to punctures is also lower with high pressure.

If the inflation pressure is continuously too low, there would be premature tyre wear. Cracking of the sidewall is the typical consequence. Abrasion would also occur more easily. On the other hand, an under-inflated tyre absorbs shocks better. Wide tyres are generally used at low pressure. The larger air volume is advantageous in that it absorbs road bumps and holes, but suffer from higher rolling resistance, less puncture protection or low tyre wear.

It is therefore impossible to make a general recommendation on inflation pressure for a specific bicycle or a particular tyre. The “right” inflation pressure depends mainly on the load exerted on the tyre. This weight is mainly influenced by the weight of the rider and any luggage. Contrary to a car, the vehicle weight is only a minor part of the total weight. In addition, there is a great diversity of individual preferences with regards to low rolling resistance or suspension comfort.

Lighter weight riders or riders who prefer a smooth or more comfortable ride can accordingly choose a lower inflation pressure, but the actual tyre pressures should never be higher or lower than the maximum and minimum inflation pressures marked on the tyre sidewall.

SO HOW DID NIC FARED?

After swapping the Siskiu D8 with a set of Nobby Nics, we attacked the definitive Singapore trail – Bukit Timah MTB Trail – once again. The tyres we tested were the Schwalbe Nobby Nic SnakeSkin Pace Star Evolution (HS463) weighing in at only 610 grams per tyre! This set of tyres are supposed to have better off-road traction and side wall protection than the Smart Sams, but a slightly higher rolling resistance thus making it a tad slower on tarmac. It is also made from a softer compound than the Smart Sam and thus predicted to have a faster wear rate. The Pace Star Nobby Nics, while being a faster set of tyres than its namesake's Trail Star version, are rated to have slightly poorer traction in the trails. Choose what you like based on your riding style.

We pumped the front and rear tyres to 35 psi to utilize the fast rolling characteristic of the tyres, and to optimize the efficiency of the 2.25 inch wide tyres. And off we go for another round.

As predicted, the bike felt slower as we pedaled along. But this was quickly overlooked with the Siskiu D8 as the bike felt more confident and sure footed. The ride became more predictable. The Nobby Nics were able to tackle every technical feature with more confidence as long as we enter it at the correct angle. That is to say that, while they are no bull dozers, they get the job done with a bit of caution and prudence. And this is just what we expected of a set of relatively narrow trail/cross country tyres. We had expected the Trail Star to do a better job at the same technical features that had given the Smart Sams some sketchy moments. No tyres were pinched during the ride.

All in all, the Pace Star Nobby Nics have a good combination of riding pace, traction and hardiness in the trail. For those who do not mind sacrificing more rolling resistance for a improvements in traction, tyres like Hans Dampf , Magic Mary or Fat Albert may catch their fancies. But those are stories for another day. For now, the Nobby Nics are what we would recommend for cross country or short travel trails bikes – like the SiskiuD8 that we were riding, and for riders who do a mix of trails and roads (with trails being the majority of the rides).

NB: Grab some Nobby Nics if you are getting the Polygon Siskiu D8!

Schwalbe Tyres are available at: