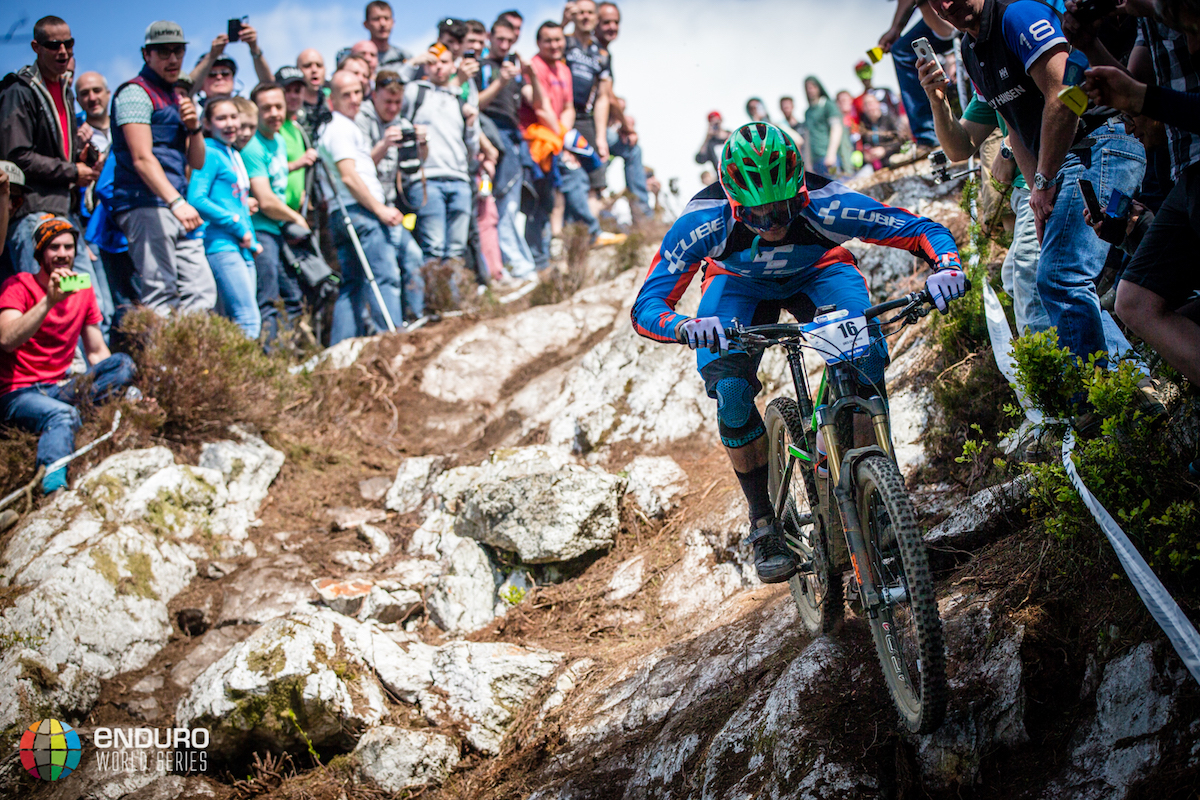 NEWS: THE ENDURO WORLD SERIES RETURNS TO THE EMERALD ISLE FOR ROUND 3

RETURNS TO THE EMERALD ISLE FOR ROUND 3

The Enduro World Series lands in Ireland this weekend for round three, the Emerald Enduro presented by Biking.ie. In stark contrast to the dusty trails of round two in Argentina, riders will be back in more familiar territory as they once more face the lush green hills of County Wicklow. Sticking to the traditional Irish enduro format, racers will tackle seven stages and around 50km of pedalling over a single day.

Last year’s event became synonymous with the amazing Irish fans, who turned out in their thousands, as well as the fairytale ending to the day as local hero Greg Callaghan (Cube Action Team) lifted the trophy. And whilst Greg will be looking for more of the same, he’s got some tough competition along the way.

With back to back wins in Chile and Argentina, reigning World Champion Richie Rude (Yeti/Fox Shox) is the man to beat. Trying to do just that will be his closest rival in the rankings, Martin Maes (GT Factory Racing) along with third placed Jerome Clementz (Cannondale). And with just 100 points separating the top three men in the competition, the pressure will be relentless as the smallest of mistakes on this short course could see them lose their position.

In the women’s race Cecile Ravanel (Commencal Vallnord Enduro Team) has dominated the field, winning the first two races of the year and more than 100 points ahead of second placed Isabeau Courdurier (SUNN). And third placed Anneke Beerten (GT Factory Racing) will be looking to make things right after a disappointing round in Argentina. However, all three women will be very aware that current World Champion and last year’s winner Tracy Moseley will be back on the start line and as competitive as ever.

In the Under 21 Men’s category, leader Sebastien Claquin (Rocky Mountain URGE bp) will be battling to maintain his lead over Adrien Dailly (Lapierre Gravity Republic). The pair are tied on points, but after his win in Argentina, Claquin leads the series. Whilst in the Under 21 Women’s category all eyes will be on Leah Maunsell, the Irish Enduro Champion who is just 16 years old.

Lapierre Gravity Republic lead the team rankings, with Rocky Mountain URGE bp and GT Factory Racing in second and third place respectively. However, a good result from either Ibis Cycles Enduro Race or Devinci Enduro Racing could be enough to shake things up as they sit just outside the top three in the points.

Chris Ball, Managing Director of the Enduro World Series, said: “The Emerald Enduro was a real favourite amongst the riders last year. Not only are the tracks incredible, but the Irish fans who turned out in their thousands made for an atmosphere like nothing the EWS has ever experienced before. The terrain in Wicklow couldn’t be more different to the first two rounds and I think it will be really interesting to see how the riders adapt to the different conditions.”

Race organiser, Niall Davis of Emerald Enduro, added: “The trails proved themselves to be fast and fun last year so we've largely kept the same route. Competitors should expect rougher tracks with a few exciting tweaks and less pedalling in the stages. It's going to be an incredible weekend in Carrick.”