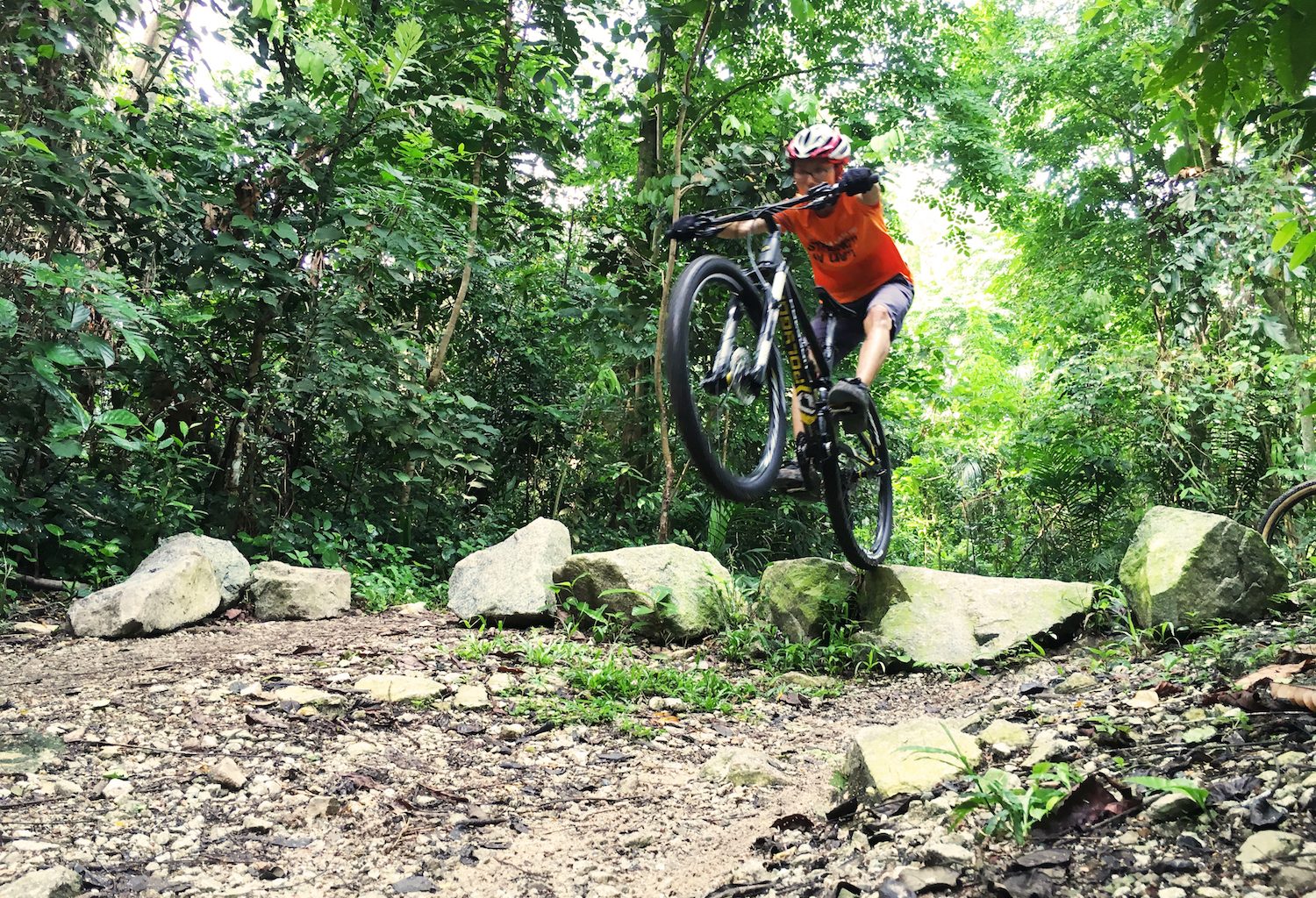 PRODUCT REVIEW: FEEL THE TRAIL ON A POLYGON SISKIU D8

ON A POLYGON SISKIU D8

Do we all agree that a big part of why we love cycling is about freedom, exploration, enjoying the great outdoors and innocent fun with buddies? – amongst other more competitive reasons .. Many writers have lamented that technology is "killing" cycling as a recreation – because very often, we are more interested in feeling the bike than feeling the ride. And we are riding a bicycle, rather than going for a ride. We stumbled across this introspection while riding the Polygon Siskiu D8. Here's why.

For mountain bikers, one of the most enjoyable bit about riding single tracks is the opportunity to be in touch with nature. With this said, why rush through a ride when you should be enjoying it? One good way to enjoy a ride is to ride a bike that we are totally at ease with. This will ensure that the behavior of the bike is totally within our expectations making the trail a truly sensory journey in all its grandeur. For the experienced rider, that would not be too difficult. But for the new rider, the best thing would be to go for a bike that is as neutral as possible, and as easy to get used to as possible.

We seem to have found a good candidate in the Polygon Siskiu D8. Let's see how this candidate fares then.

The Polygon Siskiu is a range of mountain bikes that cater to cross-country and trail use. The range includes both hard tail and full suspension bikes which were built with the objectives of forging an affordable, race capable bike that promises a stable ride. As an additional selling point to those who ride a mixture of roads and trail, Polygon assured us that this series of bikes would be a comfortable and fast rolling ride under both types of riding conditions. We are more interested in the trail riding aspect of our test bike though.

We were provided with a Siskiu D8 for our review. The Siskiu D8 is marketed as a bike that is designed for the performance oriented sporty rider who needs a proven full suspension platform for local races or just-having-a-good-time riding fast on any trails. On first look, we would say that the Siskiu's may not be the kind that would attract a second glance. It has a simple double triangle frame with simplistic straight tubings and yellow/black graphics. While the linkage looks well built, it doesn't look fancy. (Ed: What are we talking about? It's a single pivot linkage design afterall! How else are we expecting it to look like? We will talk about the linkage later. But you get the point about the bike looking kinda "understated".) This sums up to a typical Cross-countryish looking bike with conservative traditional looks.

With a Head angle of 68 deg and 73.5 deg seat tube, this bike which is marketed as a Cross Countryish sports bike has quite a comfortable geometry. The wheel base is quite typical of present day Cross Country/trail bikes at 1124mm (M size) with a 438 mm short chainstay. The cockpit feels spacious for a typical M-size frame rider like this writer – effective top tube length at 585 mm. To give a more relevant benchmark, this medium-sized Siskiu D8 somehow felt a little more spacious than a previous similarly-sized Polygon frame that we reviewed. We are indeed impressed and happy to know that the designers at Polygon do take riders' feedback seriously. Their quick response for minor tweaks to constantly improve their bikes is respectable and reflects their commitment to their products.

The Siskiu uses a double chain ring (36-22T), which lives up to its promise of a race potential bike that is suitable to even go on some occasional road duties. For the new mountain bikers, it is a good thing to try out a first bike with a double chain ring so as to experience the weight of different chain rings. The hands-on experience would give a better idea of which single chain ring to use should the bike get some component upgrades in the future. And there is no substitute for trying each component personally in the trail. So ride them out!

The Rockshox Recon Gold fork's remote lever could be quite misleading to the uninitiated. To activate the suspension, the lever has to be "tensioned" or be in "engaged" mode. This is different from the usual expectation that "engaging" the lever means locking the suspension. Anyway, it's just a minor issue that riders can learn very quickly. But still, credit has to be given to Rockshox for making such a competent entry level fork which far exceeded our expectations with regards to plushness and shock behavior.

In terms of bike geometry, we felt that the bike feels very neutral at all times. That contributed to it being an extremely easy-to-get-used-to bike. That is a definite advantage for those new to mountain biking. Rather than having to divert attention to adapting to the personality of the bike, a newbie can focus on the terrain and any technical feature, and move up the learning curve quickly. Even for the more experienced riders, the general feedback is that this bike's geometry is so neutral that even on occasions where they have to take some air, it feels confident and predictable. The rider simply needs to adopt a neutral position at the centre of the bike and let the bike do its job. The 120 mm of travel for this bike, given the correct tuning to the rider's weight, is adequate for most single track trails, encouraging the rider to push on faster at climbs while keeping composure on the descent (from a XC/trail bike perspective), albeit some feeling of frame flex when the trail gets a bit more technical.

WHY DIDN'T THEY USE THE FS3?

Using a Faux Bar Linkage driven Single pivot give the Siskiu D8 a simple, no frill yet responsive feel. Coupled with the comfortable cockpit and geometry, the bike is an excellent climber that does not pressurize the rider. It just support the rider as he/she pushes forward. Handling is predicable and neutral. That is why we constantly have this impression that when we ride this bike, we feel the ride more than we feel the bike. Which is how riding should actually be.

On the other hand, one might ask why the Siskiu range's full suspension bikes uses Linkage Driven Single Pivot rather than their tried and tested FS3 linkage. The answer is simple. The Siskiu is marketed as a sports cross country bike, which means that the single pivot would be more suitable for that responsive quick agile feel. The Linkage Driven Single Pivot managed to eliminate much of pedal bobs, a major point we focused on when checking out single pivot bikes.

One more thing to add is that, this linkage design really shines at fast rolling sections and speed hump areas. The Siskiu D8 convinced us that it could hold its speed well.

The FS3 is a more complicated linkage with more parts, which translate to more weight. And lastly, the FS3 works better for long travel bikes. At 120 mm rear shock, the FS3 could even end up as an overkill. And not forgetting this setup keeps the Siskiu series more competitively priced yet without any obvious disadvantage to the bikes' intended use.

SOME PARTS TO PONDER

We didn't like the Schwalbe Smart Sam on our tropical rain forest trail. Some may say they are really good Cross Country tires that are fast rolling and light. But, in our opinion, they are not great for all-weather trail rides or the occasional additional unplanned itinerary where we try new lines or new routes. On moist terrain, the tires took away the fun of the ride. What the Siskiu D8 could do for the rider – stay neutral and easy handling, comfortable and an excellent climber, the Smart Sam took some of those virtues away at times. We recommend using grippier tires if the owner is intending to use this bike beyond XC races.

The Mavic Crossride Wheelset's factory rear hub that is fitted with 2 paws (TS-2 System) seem to falter in performance when pushed under the power of faster riders. The hub lacks engagements to allow the rider to deliver the power to the bike when things get more fast-paced.

Although the Shimano brakes are non series, they look well built and works totally fine. But of course, there are still some differences to the pricier XT and XTR brakes in terms of braking modulation and overall quality. So the brakes could be marked for eventual upgrades.

WHO SHOULD RIDE IT

The Siskiu D8 is a very competent XC/trail mountain bike that would suit new to average riders. It is relatively well-speced and retails at a very value-for-money price. With it's neutral geometry, this bike would help the new rider to improve on technics and internalization of the cycling basics as the rider would easily be able to focus on the terrain rather than the bike. In addition, the Siskiu D8 would make a good jamboree or long XC/trail rides for the more experienced riders who wish to have another bike for their occasion plantation or long epic road-plus-trail rides. Don't just enjoy riding the bike. Enjoy the trail!

Check out the Siskiu at the following outlets: