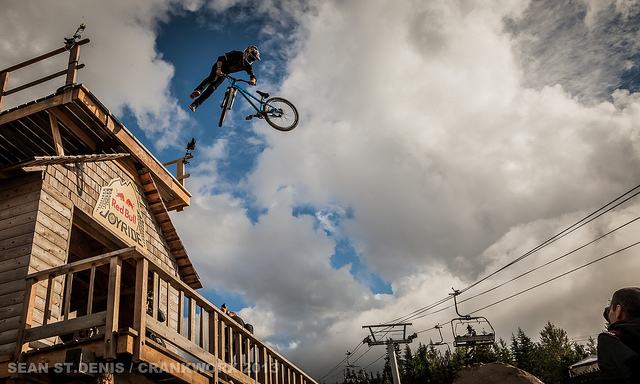 VIDEO: DELIVERS THE DIRT ON THE BEGINNINGS OF CRANKWORX

VIDEO: DELIVERS THE DIRT ON

THE BEGINNINGS OF CRANKWORX

AT A LITTLE EVENT CALLED JOYRIDE

The final video in a triology of stories from behind the scenes of the largest summer event in Whistler, Inside Crankworx: Sculpting Dirt gives B.C. and Alberta viewers a chance spend a day with the man who created its main attraction, Red Bull Joyride.

“It took a few years, and I had some great people helping along the way, but the big challenge, to me, was to build the world’s best Slopestyle course,” says Kaye, owner of trail building company Joyride Bike Parks.

“There’s no way we would have a course like we have today without feedback from all the top riders. How big. How safe…It’s a constant back and forth, and what it does is give us the best possible product, in this day and age, that we can deliver,” Kaye explains in the video.

Inside Crankworx: Sculpting Dirt follows the release of Inside Crankworx: 15 years a Pro, a video feature released last week on the youngest person to win the Official Whip-Off World Championships, 15-year-old Whistler local Finn Iles. The second Crankworx story, Inside Crankworx: The Queen of Crankworx, gave viewers a look at Revelstoke-based pro-rider Casey Brown’s fight to become the Queen of the Crankworx World Tour. It was released Thursday.

This was the 12th year of Crankworx Whistler, and the first year of the Crankworx World Tour. For 2016, the tour brings Crankworx to Rotorua, New Zealand, in March, and Les Gets, France, in June.

Telus Optik Local supports compelling, original storytelling in British Columbia and Alberta by providing funding to filmmakers to produce their content, training to maximize their potential and exposure to new audiences. Content is distributed for free on TELUS Optik TV as well as online.

All information, photos and video by Crankworx