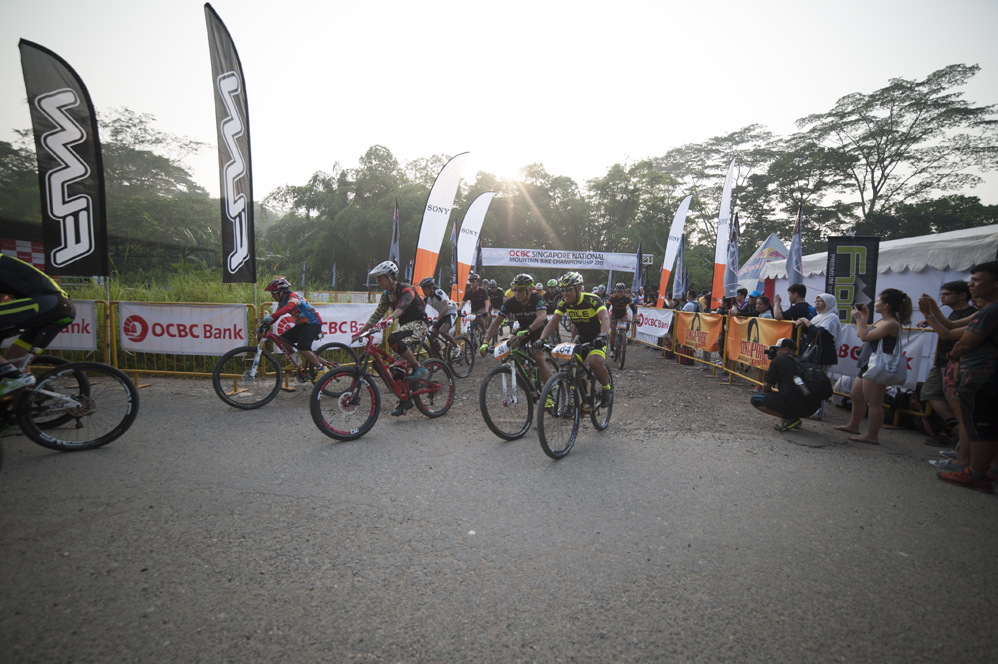 THE WHO'S WHO IN XCO, DOWNHILL AND MTB MARATHON FOR 2015!

The MTB Carnival 2015 was a little different from previous years'. It had evolved. Along with the usual marathon race, it also co-hosted the National Championship XCO and Downhill races. With 3 races all happening on the same day, this year's MTB Carnival had a lot more action going on. Bikezilla soaked in the action-packed Sunday and came back with some inference. We also have the race results all condensed into one page. Read on for our views and race results.

The daybreak at Lor Asrama felt the same when our car drove in to unload our supplies. It was going to be a long day ahead, so we loaded ourselves with lots of food and drinks, some tools, bikes and cameras. The tents for the racers were erected at the same spots as last year. The time keeper used the same shed for their work and the starting point for the race was also where we last remembered it to be. It seemed like we were going to repeat what we did at last year's MTB Carnival. Bikezilla had the privilege to be a media partner for the day's event as well as a chance to mingle in some marathon race action.

EVOLUTION OF A EVENT

This is the 9th Edition of the MTB Carnival. A lot had changed since its early days. 3 years ago, it started using Lor Asrama as the venue. And for the first 2 years, the marathon race route was similar with an addition for timed Enduro sections in the second year. Besides that, the route remained largely unchanged for the first 2 years at Lor Asrama. But the race route and terms evolved this year.Instead of the previous 8-hour marathon, it is now changed to a 6-hour race. There are a lot more single track sections and the race route felt completely new. In fact, under the searing sun and vast landscape of Lor Asrama, the race route felt tougher than the previous year to many. The Fox Hole Run section was used for the National Championship Downhill race, and that too was a very well-designed race course.

As the time drew near for the downhill practice and race, the downhill racers and supporters moved en masse for Fox Hole Run. And that left the marathoners and XCO riders at the Team Area.

To those who visited the event during the afternoon, it looked like this year's carnival had a smaller turnout, but it was not really the case. But then, there were a marked difference in the number of participants for the marathon race. Many of the riders had to give up the marathon race in exchange for the National Championships. But some riders did make time for both the National Championship XCO and Downhill as they were held at different times.

In our opinion, we felt that holding the National Championship races on the same day as the marathon did drew away some participation from both sides. It would have been more challenging should they be held on different days.

And being the greedy minds that we are, splitting up the National Championship races and the marathon would also mean more events for us to go to.

DID WE HAD FUN?

All said, everybody still had tremendous fun! The XCO/marathon race route and downhill course was well designed. The addition of more singe track was a brilliant move. The venue has so much memories from regular/repeat racers. And MTB Carnival had became an informal annual meet-up for the MTB community. The retailer booths was (in our opinion) more interesting from previous year's with demo bikes from some booths and a rock & sand strip for bike testing – coutesy of Specialized and Tay Cycle. The event wrapped nicely with a group of happy winners. Congrats to all the winners at the races! We look forward to seeing all of you (and those who has not joined before) to join in the MTB Carnival 2016. Meantime, stay cool with some ice-cold herbal tea and start training for the next carnival!

(ED: We post almost all the photos in our photo gallery so that all riders have a chance to find their shots. While some shots may not be as good as we wanted it to be, it's the moments that counts. Do check out our photographers' pick from the lot in imagery soon)

RACE RESULTS AT A GLANCE