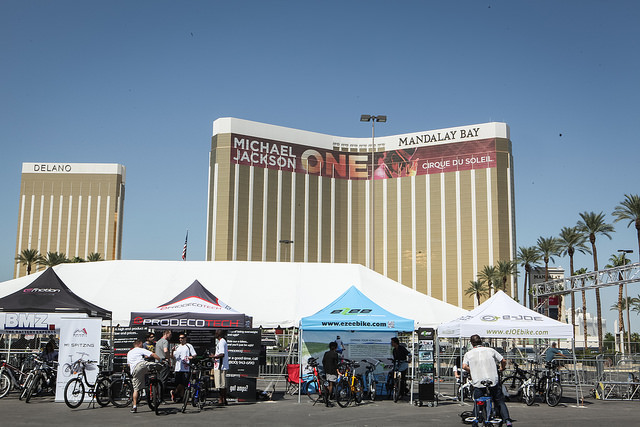 CALLED " THE CIRCUIT, PRESENTED BY SHIMANO"

Many moons back, Bikezilla had placed stake that the future of bike designs would still be focused around urban and pedal-assist bikes. While many purists from the sport-focused segments felt that this is not pure cycling, it is nonetheless one viable and sustainable avenue towards the realization of "biking nations". We will see more of this in the coming Interbike 2015.

Interbike, the largest bicycle industry trade show in North America, announced a strategic partnership with Extra Energy Services North America (EESNA) to bring a unique, purpose-built test track indoors to the show for attendees to evaluate the performance of a variety of motor systems and bicycle designs, including E-bikes, Fat Bikes, and Urban/Lifestyle bikes.

“The Circuit at Interbike” will be designed and produced by EESNA and will feature a 15-foot wide (each direction) loop that travels over 1000 feet through a dog-leg left turn, s-curves, and a hairpin return all leading back to a paddock start/finish area. In addition to the standard loop is an 8-foot wide E-bike Power Ramp that provides a 34-foot incline rising up 4 feet to an 8 foot long platform before the decline on a matching 34 foot down ramp. This ramp is specifically designed to allow riders to feel the power assist provided by the E-bike drives. A dedicated Terrain Lane featuring a number of engineered ramps and obstacles, will be provided for riders wanting to test the capabilities of the emerging breed of Fat Bikes. Finally, a non-woven floor covering will eliminate the challenge of the polished concrete exhibition floor.

“With the addition of the new hall and space at Mandalay Bay it’s allowing us to create a legitimate, professional test track facility on the show floor in a cool, comfortable environment”, said Pat Hus, Vice President of Interbike. “We’re investing a lot here and we’re confident that the track is going to be a game changer and a new feature of the show that will be very important for years to come.”

SUPPORT FOR A GROWING MARKET

North America and is looking to this test track as a way to support the growing market.

“This track will provide the perfect setting for Shimano to showcase its STEPS E-bike groupset,” said Dustin Brady, Shimano American Marketing Manager. “We’re looking forward to engaging with retailers through this new and innovative feature of Interbike.”

The partnership between Interbike and EESNA came about as part of the launch of a planned promotional tour for E-bikes to be produced by EESNA, called The Electric Bike Expo. Following the launch at Interbike the six-city tour will kick-off in January 2016 at The IBD Summit in Tempe, AZ and will focus on introducing consumers to the fun experience that E-bike technology can bring to people new to the category. While the additional tour stops are still being finalized, the initiative is underway with participation and sponsorship opportunities now available.

“There’s no better place to launch our six-city tour across North America than the ultimate gathering for the bicycle industry – Interbike,” said Ray Verhelst, CEO of EESNA. “Interbike attendees have never seen such an elaborate track and we’re confident that retail attendees who want to test the latest and greatest electric bikes, urban bikes or fat bikes will not be disappointed with their experience.”

The newly create company, Extra Energy Services North America, Inc., is derived from the highly recognized ExtraEnergy.org conglomerate in Germany that has extensive relationships with e-bike suppliers, distributors, engineering firms and importers throughout Europe and Asia. The company is a leader in e-bike testing, product marketing, publishing and governmental legislative support. ESNA is made up of a consortium of companies, each with their own expertise.

There are several ways for brands to demo bikes in The Circuit at Interbike. These opportunities, including a limited number of booths within the confines of the track, are available for purchase through the Interbike sales team. Interbike returns to the Mandalay Bay Convention Center beginning with OutDoor Demo in Boulder City, Nev., September 14-15, 2015, followed by the Interbike Expo September 16-18, 2015.

All information and photos by Interbike