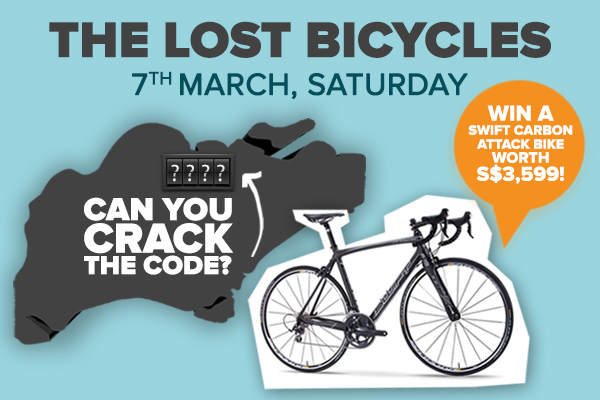 Heard about the three lost bicycles scattered around town waiting to be found? It got some folks putting on their puzzle-solving caps and waking up really early attempting to crack the codes. We found the lost bicycles … and the lucky winners!

The first of the Cycle Asia Singapore 2015 Lost Bicycle Challenge's lucky winners, Melvin was at the front of the line at Upper Thomson Road at 5.30 am on Saturday morning with all the clues gathered from the Lost Bicycle challenge. Collecting the numbers from across the Cycle Asia social media platforms over the past few weeks, he successfully unlocked the bike padlock and walked away with the fantastic prize of a Swift Carbon bike worth $3,599 and a Sony Action Camera worth $579.

There were two other lucky winners who also picked up a brand new bike! Keith Koe headed down to Wheelers Yard to crack the code and won a Trek mountain bike (worth $639) and Sony Action Camera. Whilst our youngest winner James Montesines went east with his father and picked himself up a cool kids bike ($485), helmet and Sony Action Camera from Xtreme Skate Park thanks to his problem solving skills that gave him the four numbers needed to crack the padlock code.

The Lost Bicycle Challenge is part of the registration drive for Cycle Asia Singapore which takes place from 10th-12th April at the F1 Pit Building and offers riders of all ages and abilities the chance to ride on fully closed roads.

All photos and information by Cycle Asia Singapore