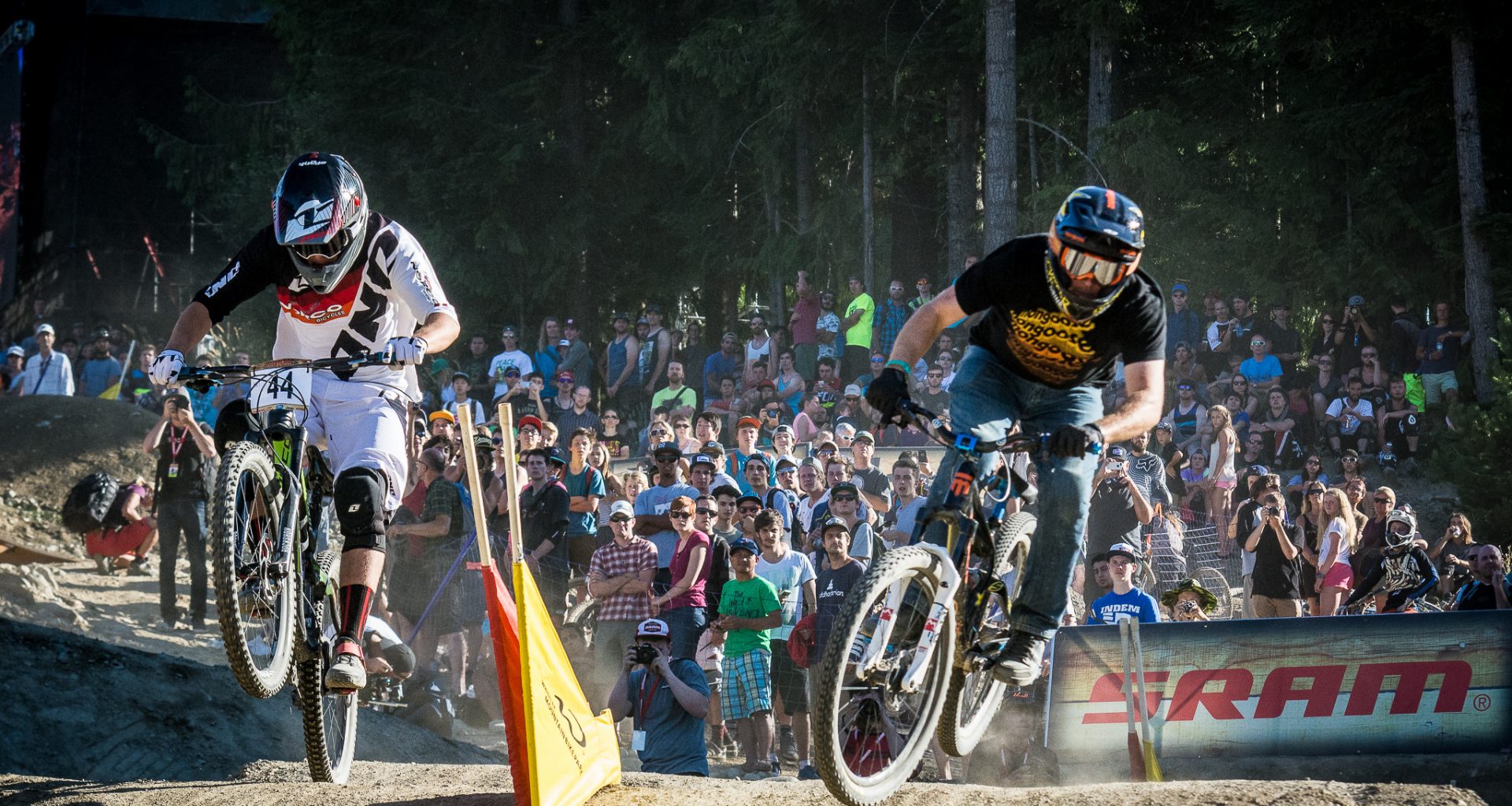 WHISTLER, BC August 9, 2014 – An all-American top four battled for the Crankworx Whistler podium in both the Small Final and Big Final of the CLIF Bar Dual Speed & Style, with Kyle Strait (USA) eventually coming out on top.

“Must be something in the water down there,” said second place rider Greg Watts (USA) who also noted that all the riders were from California. Ryan Howard (USA) beat out Barry Nobles (USA) in the Small Final for the final podium spot.

Strait’s win came during an intense final duel with Watts. In their first matchup of the Big Final, Strait pulled out a big Indian Air on the first jump and also managed to cross the finish line first, taking the round in a show of both speed and style strength. Their second battle saw Strait take an early lead in speed with Watts pulling a bar spin the a backflip before crossing the line 0.04 seconds ahead of Strait, but it was not enough for the gold.

“All day the blue course has been a lot faster,” said Strait of his strategy. “So I made sure I got as much time on that as possible on that side. Then on the other side I tried to see what he was doing on each jump and hoped I’d be close enough for the victory.”

The need for a game plan is something all top riders seem to agree upon. To win a Speed and Style event, strategy is equally important.

“Doing a trick takes a lot more time than staying low over a jump,” added Strait. “It’s a bit of a cat and mouse out there. You’re trying to figure out what the other guy’s doing. Sometimes if you’re a little bit behind you’re actually looking at each other, so you can figure out if you’re behind or ahead and figure out exactly what the other rider’s doing and try to think fast enough to try and beat it at the same time.”

While it’s a game of both physical and mental strength, it was clear to those watching the interactions between the riders, at the end of the day it was just another day on the hill for them.

“The first couple rounds are a little nerve-wracking, you’re kind of figuring everything out. But once you get through a couple rounds you’re happy with your riding and you’re basically just riding with your friends and having a good time,” said Watts, to which Straight add: “It’s rad.”

The second day of Crankworx competition brought 15 riders to the finals for the CLIF Bar Dual Speed & Style, an event that is often cited as a rider favourite at Crankworx. The unique format and mix of disciplines allows racers and slopestyle athletes to bring their respective strengths together to battle it out for supremacy.