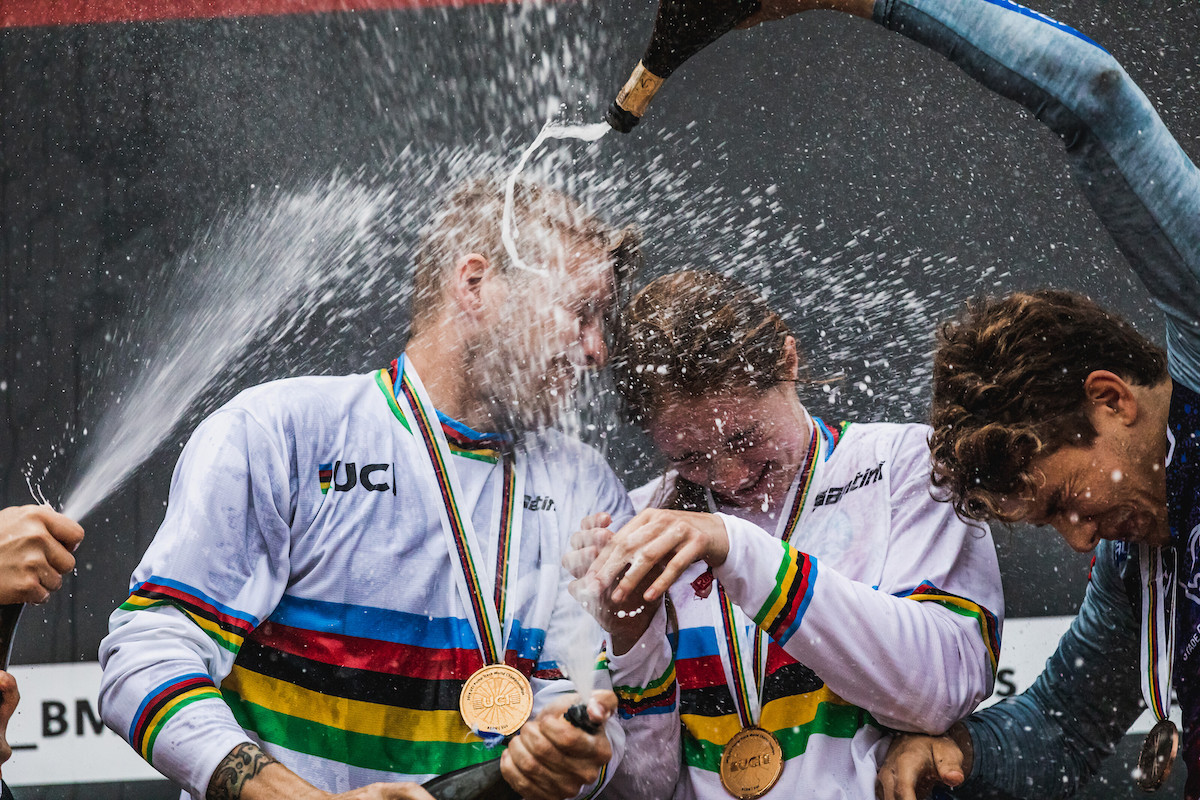 American duo Tommy Zula and Payton Ridenour are proud owners of the coveted UCI rainbow jersey after they became Pump Track world champions October 2019. The talented duo triumphed in challenging, wet Swiss conditions to claim the inaugural UCI honour in their chosen discipline and they took time out to reflect on their victories and what the future holds now.

What does it mean to be the Red Bull UCI Pump Track world champion, the best in the world at what you do and the first to be awarded the rainbow jersey?

Tommy Zula: “It’s unbelievable. The helmet, the trophy, the bike and the jersey are all going on the wall. I’ve been racing bikes since I was eight, so to get my first ever rainbow jersey is a huge achievement. To be the best in the world, that’s pretty insane too.”

Payton Ridenour: “Winning a rainbow jersey definitely makes this win extra special. Throughout my entire life that I’ve been racing competitively, I’ve always dreamed of having a rainbow jersey especially since so many people I look up to have one too. I will hang my jersey up on the wall. I was already nervous about getting champagne on it during the podium! This jersey means the most to me out of all the awards I have ever received. The feeling of winning a world championship still seems unreal. I haven’t been able to stop smiling these past few days because I’m still super stoked.”

Tommy, did victory exceed your expectations or did you go into it thinking you could be champion?

TZ: “I knew it would be tough, but I’d done all the preparation coming in so actually the whole day almost felt easy. I knew if I rode the best I could, I would do it and everything felt perfect. It’s a huge track and fitness really plays a bit part. I didn’t go out in the first round to show off straight away but conserved my energy. I watched some of the guys and I knew that I could go faster while I could see they were going out and not holding anything back.”

Tommy, what has the reaction been like back home?

TZ: “I spoke to my grandpa and I was tearing up a little bit as he sacrificed a lot to get me to bike races, often skipping his own work so he could drive me wherever I needed to go. The result meant the world to both of us. So I won it for him – he’s also Tom Zula – and for me.”

Was it always bikes growing up and when did you know you could be a world champion on two wheels?

TZ: “I did a bit of everything growing up: track and field, basketball, always something but it was about 13 that I knew that bike riding was sport. I’m from a small town in Ohio called New Carlisle and cycling isn’t that big but just as I was about to go to college, a BMX coach phoned me and said, ‘I think you have the potential to become a bike racer. Come live with me, I’ll train you and give you a car’. So I told my parents I wasn’t going to school and they were a bit nervous as I had no back-up plan. But I trained for a couple of months, went to my first bike race as a pro in Reno, Nevada, and won.”

PR: “I’ve been racing BMX ever since I was five and I’ve always wanted to win big. Winning the Red Bull UCI Pump Track World Final was just that!”

Tommy, you’re first known as a BMX rider but you switched to a mountain bike for this event. How difficult was that switch?

TZ: “To do it on a mountain bike meant a lot. My sponsor started making mountain bikes and I’d never really thought about it before but they asked me to ride one. I was nervous to make the change but, right away, I knew that something was clicking with the bigger bike. I fell in love with all of it. Last year when I made a mistake people said, ‘He can’t do it on a mountain bike’, so I went back to prove them wrong. I’d won Crankworx Whistler and felt I’d caught the wave and was on a roll, and the motivation is to keep improving. The more I swap between the bikes, I find the easier it gets. Plus, it keeps things fresh and you don’t get burnt out getting on a new bike.”

Payton, how much fun was it racing against people on different bikes other than BMX?

PR: “I think it’s super cool that riders from all different kinds of disciplines can compete against one another. It helps grow the scene and inspires all types of riders to get involved.”

So what’s next? Are there further career ambitions?

TZ: “I’m off to Africa with Velosolutions’ project Pump for Peace, so I’m going to hang out in Morocco with a bunch of kids. I am home on October 31 when I’ll get to celebrate with family and friends. Going forward, I’m going to take everything from this – the muscle memory and being able to defend my title.”

PR: “BMX racing is definitely my main focus but winning the Red Bull UCI Pump Track World Final has inspired me to keep progressing even more. Travelling to Switzerland and spending the week with people who share the same interests as me was awesome. This trip was the most fun I’ve ever experienced and I can’t wait to go back next year to defend my world title.”

Read More
Welcome to Doi Suthep-Pui National Park, and Ban Khun Chang Khian village, a Hmong tribe village located in the heart of the national park. In this article, we are going to look at a little of the history of the mountain, the people who live within the national park, activities in the park and what the residents do for employment.
0
Let's Ride!