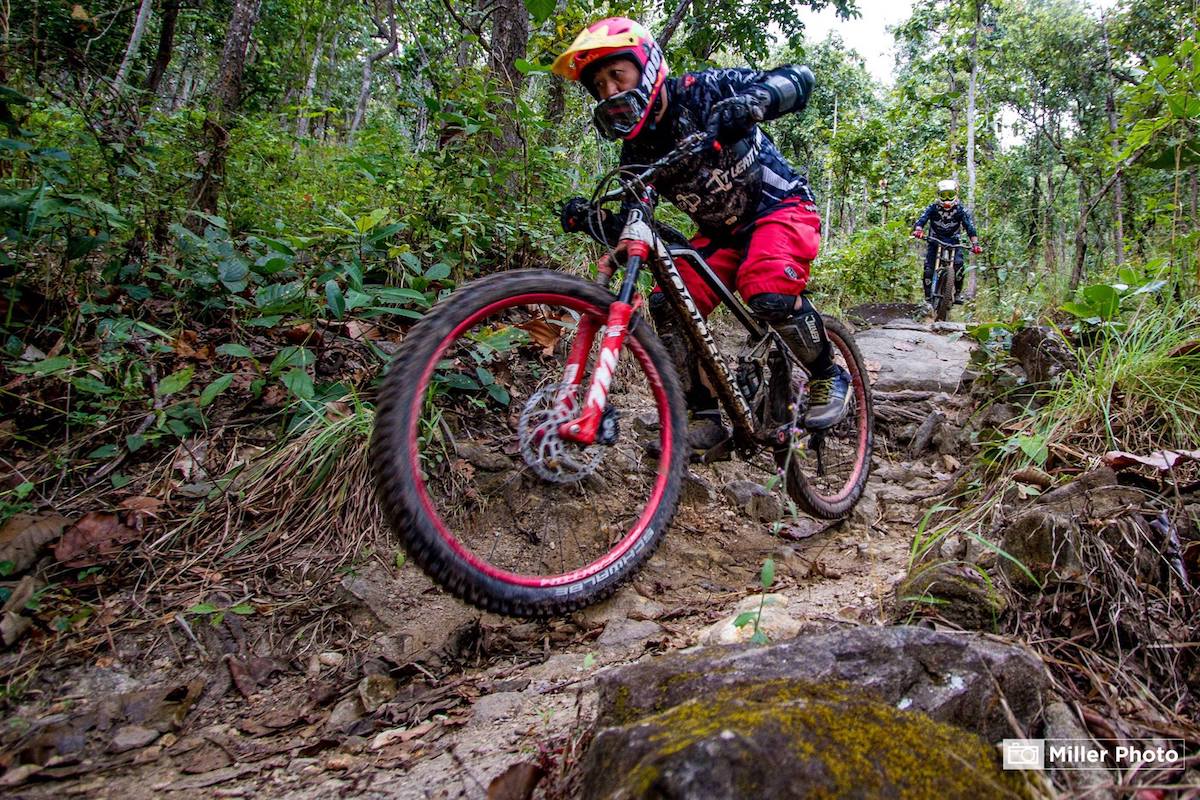 GRIPS THAT OFFER THAT EXTRA DAMPING FOR BETTER RIDING EXPERIENCE

Grips. A part of the humble mountain bike that is often overlooked, and confined to narrow characteristics such as texture, dimension, and durability. While grips appear simple in construction, the MTB connoisseur knows better. He knows that the seemingly simplistic grip is vital and necessary for comfort in the saddle. With that said, we now turn towards a novelty amongst grips; Revolution Suspension Grips.

In a nutshell, the Shock Absorbing Grip system found in the grips (or, RevGrips) advances comfort on a mountain bike by introducing a new, previously unexplored, characteristic into the mix of things; Dynamism. Via a combination of tuning washers, shock absorbing inserts, and the fact that the grip sleeve avoids actually contact with the handlebar, RevGrips seeks to reduce armpump, and other sores and pains that come from an excess of trail feedback (see our First Look). But how well does it perform under real time conditions? Let's find out below.

One thing that caught our attention, very early on, was how tacky the grips were right out of the box. In the dry, this made for some impressive grip traction, especially with the medium sized grips and their slightly taller lugs. However, the grips became curiously slick for most of our testers in the wet, or even under bare sweaty palms, and our testers noted certain stress marks on the rubber before actual trail use. Despite that, a pair of gloves quickly solved all problems with traction, and the stress marks did not translate to actual wear and tear in the long run.

Rev Grips calls this part "Tuning the Grip". (Ed: We realized that the solution is simple yet effective! Why didn't we think of this first!)

(As explained by the inventor themselves)

(After a few simple trail rides)

The grips were tested and broken into on local Singaporean trails about a month before some hard usage on the trails in Chiang Mai, Thailand. The soft rubber made the grips extremely comfortable to use, and the slight rotational movement in the grips were hardly noticeable, even when our testers got a little more loose on the bike, or in the air. It was already quite obvious to our testers, on gentler local trails, the feedback dampening qualities of the grips. This was especially apparent on square-edged bumps. One of our testers had a particularly odd fall, but had no problems with riding out of the trail despite injuring his digits a little.

(Somewhere in Doi Sutep after all the gnarl and steep places)

Chiang Mai, on the other hand, is a completely different animal from local Singaporean trails. It's almost like comparing a dragon to a house lizard. The trails are natural, and raw. There's no large scale maintenance, and it's not manicured like a bike park. It's extremely steep, which equates to high speed descents. Skill factors are put to the test though, because along with those gorgeous high speed descents are rocks, potholes, and ruts which are scattered along the whole length of the trail. Not to mention a haphazard of rock gardens which appear every now and then. On average, the downhill trails in Chiang Mai are in excess of 6 km long, and descents are from an elevation of approximately 1300m above sea level.

Our testers frequent Chiang Mai, especially during the cooler months (that's roughly between late October and early January), so it was easy for them to spot the differences. As an easy conclusion, the RevGrips WORK AS ADVERTISED. At least 80% of excessive trail feedback and noise were canceled out on the grips medium setting. Before, some of our testers had to stop the ride due to arm pump and chronic wrist pains. However, with the RevGrips, it was smooth sailing (somewhat) all the way down.

(Goggles were fogging and he had no time to stop. By the way, this dude rode beyond the review period. Had another 4-day session after the group review and the grips are still going strong as at press time.)

Some longer term effects over our testers trip in Chiang Mai was also noted. Our riders managed to ride consistently for 6 days, instead of their initial plan of 4 days. There was absolutely no armpup experienced by them.

Of course, in terrain like this, one can expect a few tumbles. Despite a couple, the grips held up great, especially the aluminum bar ends, which only showed some abuse from minor scuff marks.

By the end of the whole trip, the grips showed some obvious wear, but nothing near the end of it's useable lifespan.

All in all, the Rev Grips shine in comfort and use from it's general grippiness, its tunability and its effectiveness at isolating and blocking trail feedback. Moreover, a quick perusal of RevGrips home site shows that many of the grip's parts can be purchased, allowing the grip to be rebuilt in the course of wear and tear. Some of our testers were particularly taken by the diameter of the grip, which added to the comfort level.

However, our testers did comment on its overall durability. However, this was an inevitable trade-off for the soft compound used in the grip which attributed to it's grippy nature. In addition, installation can be a bit of a challenge for those less mechanically inclined. Other points to note include the relatively high price point. However, for something that works that well, it's very much bang for buck.

For all of you out there who are looking for a solution to that nasty armpump, definitely pick up a pair of these nifty grips!

Check out more on Revolution Suspension Grips at RevGrips, and GRAB them at their online store!

Photos by Bikezilla, and courtesy of Miller Photo

(The grips were installed some time back and used at various trails, and at Doi Sutep Chiang Mai, it was used for 6 days of hard descends without washing)

(The rider went through some fearful moments)