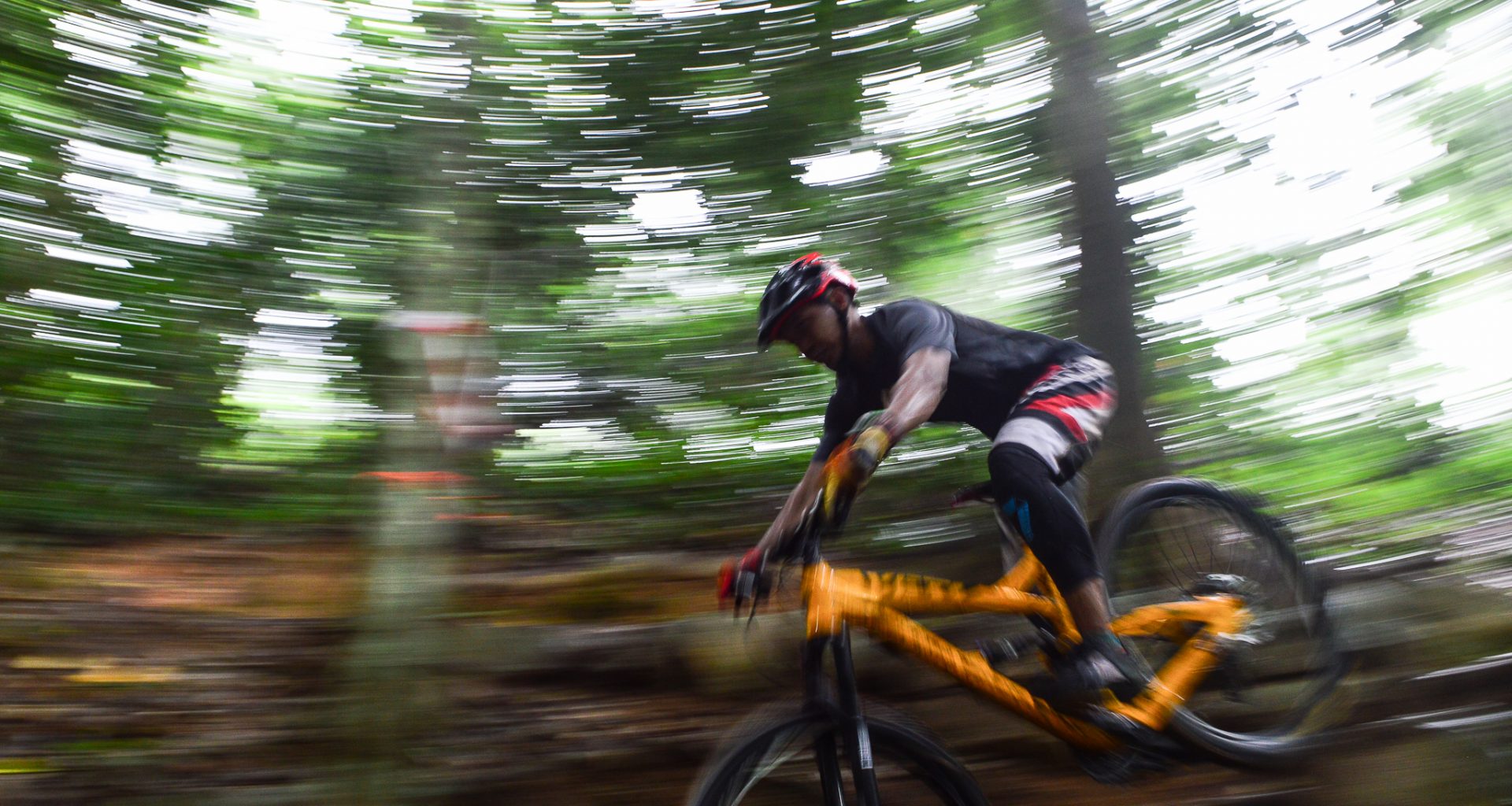 EVENT: THE SINGAPORE OPEN ENDURO 2017, A LOOK IN RETRSPECT

A LOOK IN RETROSPECT

A Look-Back at Singapore's largest Enduro Event of the Year

It's a special kind of camaraderie, affecting even those watching the racing from the sidelines.

Enduro. The etymology stemming from "endurance", or "to endure". The term was first used sometime in the 1950s, the informal suffix "-o" becoming fast stuck to form a word which has come to have greater meaning and significance to MTB communities, and its unique culture, everywhere. Singapore is no exception to this general rule.

The Singapore Open Enduro 2017 is hard proof to the growing scope of that definition. In this retrospective look at the local enduro "race-of-the-year", it's not difficult to realize quite quickly how the word has evolved past a description of a mere test of mettle and endurance in a rider, to become one which encapsulates some of the key facets of mountain-biking; Camaraderie, i.e. "mutual trust and friendship among people". Read on to see, or recall, the celebration of that very camaraderie, baptised in tropical heat and Singapore's own soil (imported or otherwise, but fast becoming mud under unpredictable weather conditions).

As in all races of any nature, time is literally of the essence. The amazing guys and equipment form SPORTident Singapore translating the riders' race efforts into quantifiable data. Seen here, the necessary tedious registration process, kept as smooth as butter by Wilson & Co.

Chee Keong and Hong Chun, raring to get the bikes squared away for a wild one on the trail.

While it's something else to watch, read and hear about enduro as a race format on the EWS scene (Note: That's the Enduro World Series, in case you didn't know), it's something else entirely to be at the centre of an enduro race proper. I'm not going so far as to say that our local racing scene has developed that far as to rival anything the EWS can throw out, but it's a start. It hits you square on the forehead when you realize some aspect of the essence of enduro as a race format, i.e. a race format centered and built around everyday trail riding.

Unexpected downpours are all the rage when you're surrounded on all sides by tropical rainforest. No cancellations or any disruptions though, it's always just another part of the race.

Deep in the secondary tropical rainforest of Singapore, legend has it that fairies still reside. True to form, Prudence here channelling some of that spirit in all the enduro hype.

Soon Soon and Yaw perusing the lines at the start of the SOE proper.

A huge takeaway for a lot of riders would probably have been the exposure to the racing element. Many people undestimate how that positive stress can expand repetitive and seemingly mundane experiences. Riding the same lines, tracks and trails can be boring too. Although mingling with good company and friends can somewhat help, nothing gets you raring to go faster than having a fox-and-hound moment during a race. It gives some new life to old trails.

While old legends were burning bright on the trails, some fresh embers were definitely beginning to smolder. The necessity of a racing platform like the SOE, born in that peculiar medium of enduro racing, makes itself known the more some relatively unknown young gun spins past you in a frenzied blur. It was definitely a sight, as usual, to watch the usual guys hammer it out for top spot. But it was absolutely refreshing to encounter some new names up on that timing list, giving the old boys a run for their money.

Ian taking that sweet Evil rig out for a splash at Chestnut South, definitely smashing the seconds through all the way around.

From out of the dusk and the dirt, we watch you.

While new riders were blooming in the wake of more experienced riders, things were no different on the photography side of things. With a race course so diverse, with equally diverse groups of riders, both local and international, it was a target rich environment for all lens lugging warriors that rainy race day.

Just some of the regular carnage.

With less than dry conditions, and the pressures of racing on hand, not only were riders feeling the wear. Bikes, components, equipment. All took hits of a different kind, but all were definitely subject to wear and tear of the extreme kind. Diverse as Singapore is in its peoples, so is it diverse in its' species of mud. You had all sorts that day. Clay-ey bits, grainy clumps, the kind that's neither too wet nor hard but seems to want to follow you home in the most unexpected places.

Is that a new tone of Kashima, or is it just some Singapore flava?

Despite it all, SOME guys had a little luck. The pitch black stanchion on this CaneCreek Double Barrel Air escaping muddy clutches.

Brakes. Probably the one component facing the most abuse.

Is that the sun looming out of the rain clouds? Or is it just the eerie Day-Glo from this fine piece of engineering?

In sharp contrast to the race-worn, and grimy bits of steed all over, there were a few select spots where riders could feast their eyes on something a bit more star-like. With the exception of some choice bike bits, Oakley had their booth up and running through the rain and tide, sporting some eye blingage for all to partake in.

All the better to see the trail with. A choice select of Oakley frames sporting the trail specific Prizm lenses.

It was only somewhere near the end of the race, where the real action started. Riders were coming in from their last runs, eyeballing the timings as they leaped this way and that. The sheer amount of focus, that narrowed gaze, furrowed brows all around. The obsessive concentration pouring into the lone LCD screen, as it displayed figures which twitched with new entires. Who says local riding can't be serious?

Florent Poilane seen here with an equal amount of thousand yards in his gaze as the best of them.

What definitely took it away for me, in terms of standards, was definitely the number of international riders who were there. Insanely fast on tracks so oddly familiar to us. Sometimes, all it takes is a little push, though. There was a more intense, more palpable sense of competition in the air, and I can't say that it wasn't because we had some new faces out on the trails that day. Whatever it was, it's always good to keep some element of change in the mix of things.

Tsalina Phang seen here with that fierce intensity that comes so naturally. An insanely brilliant and determined rider.

Vibes. It's all about the good vibes when it comes to Hsih Chin. Great stuff watching him race.

The after race glow, spent best with the family.

More carnage from the trails just rolling in! Brandon Chen seen here with his muddied up rig; put through the paces with a hellish rider.

After the burn of racing faded down, it was a relative tone-down in adrenaline as riders waited for the timings to be compiled, to set their efforts into relative stone. The euphoria of racing bitten away a little by the haze of exhaustion, this is where having good friends around keeps things high.

Tingjun on the search for a buyer for a fresh pair of FiveTens. Not quite sure if she did manage to find one at the end of the day, but what better place to sell when you've got riders roving everywhere?

Prudence livening it up by announcing winners of the lucky draw!

Adam Boyle seen here, doing what he does best, while sporting some snazzy shades courtesy of Oakley.

On a relatively serious note, i think a special shout out is in order to thank all photographers, and videographers, who spent the time catching bits of the action all around. Races wouldn't be what they are if the pictures didn't tell half the story, or if the videos didn't get your heartrates up to race-worthy levels while you're reclined in an armchair at home sporting a cold one fresh out the freezer.

It's infinitely difficult to put into mere words the experiences at an event like the SOE. On the one hand, feeling exactly like another weekend out on the trails with the boys, and yet, on the other, an entirely different, enticing picture altogether. Like a dream that just fleetingly greeted you and went on its way, another SOE, the 2nd iteration, to be precise, has just gone by. So, what's next? Whatever it is, I just earnestly hope that it'll take me on a similar adventure like this one. Suffice to say, it looks like enduro may have found its voice and form in the Singapore Open Enduro, effectively bringing the crowd together in one raucous cheer. See you at the next one!

Jerome Tan is part of the Bikezilla Editorial Team. He enjoys spending time in the green rather than in urban jungles. Some may mistake him for a random homeless person living off the land in the depths of Bukit Timah Nature Reserve with his Knolly Warden. With all that said and done, Jerome enjoys wanton mee, and excessive amounts of laksa with equally excessive amounts of chilli just before a day out riding. You know, just to make things interesting.