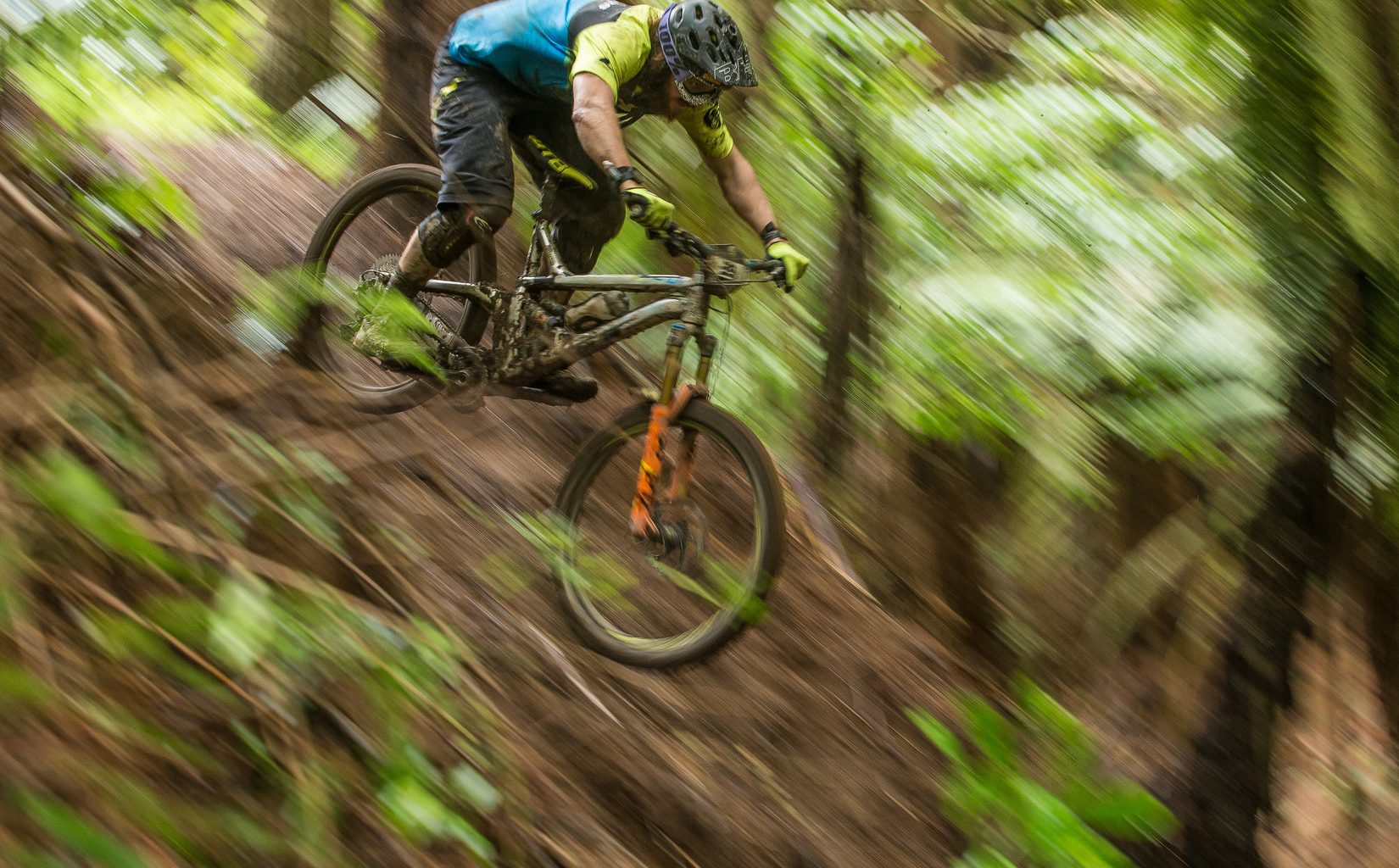 THREE PODIUM SPOTS AND THREE KIWI RIDERS TO FILL THEM,

(Wyn Masters lives up to his name, taking the GIANT Toa Enduro win)

RAIN AND MUD ADDED TO THIS TOUGH RACE

Weather reports predicting rain would hit early in the day proved all too accurate as the racers, not half an hour into the race, found themselves giving up mint-condition tracks for messy mud bogs capable of cobbling even the best riders.

“My toughest stage was three, but it was the stage I was most looking forward to. Someone told me I was second in the race at the top, and then I tried to go way too hard, and it was the biggest mess. I’ve never seen that stage look like that – I couldn’t get out of the ruts,” said Masters.

The track in question, Hatu Patu, was billed as crash and carnage central even on a sunny day, and having bounced off the bike pretty quickly, Masters was under the impression he was out of contention until hearing he was just 20 seconds behind his brother, Eddie Masters, going into Stage 6.

“I would have been stoked to be on the podium with him, but I had to be above him,” said Wyn, noting he poured on the gas.

This is the first time at the top of the podium for Masters in the Enduro World Series and Crankworx, and he was, in the end, joined by his brother, who took third place.

Meanwhile, fellow Kiwi, and last year’s winner, Matt Walker, was thrilled to pull into second for this first big race of the season. After winning the GIANT Toa Enduro last year, Walker, a King of Crankworx contender, injured his hand and spent much of 2016 in recovery, leaving him hoping to make a comeback.

“I know it's a really long season, so starting strong wasn't really a focus, but it was definitely in the back of my mind,” he said. “This is something that I wanted to achieve this year – definitely some good momentum today.”

If there was one man who couldn’t seem to catch his rhythm, it was 2016 Enduro World Series Champion Richie Rude (USA), who finished 20th. Seeded in top spot coming into the race, Rude had the misfortune of riding last on the well-worn trails.

“I would say I did the best I could have… there were three, four hundred people in front of me just chewing the tracks up… it’s hard to go last,” said Rude.

Weather drastically affected the results of the race, which wasn’t set to be easy either way. This year’s GIANT Toa saw the athletes ride 64-kilometres, with 2,079 metres of elevation drop and seven stages of racing. None of the top-30 EWS riders hit the podium, though the women’s field held steady to predictions.

Enduro World Series Champion Cecile Ravanel (FRA) absolutely annihilated the field in the women’s race, finishing three minutes up and winning all but one stage. Pleased with her results, she admitted she had nerves coming into the day.

“It was the first international race of the year, so it’s hard to say if I’m in good shape or not,” she said.

Gambling correctly she would need a tire set-up for mud, she won the first six stages handily, but nevertheless looked exhausted by the time her seven-plus hours of riding finished at Village Green on the edge of Lake Rotorua. The one stage she left on the table, Stage 7, went to Katy Winton (GBR)—her first EWS stage win ever.

Ines Thoma and Anita Gehrig, second and third respectively, remained consistent throughout, Thoma remaining in the top three or four from stages two through seven, and Gehrig never slipping further than sixth spot in the same stages. They finished 16th and 18th on the first stage in the pouring rain as carnage ensued among the rest of the pack.