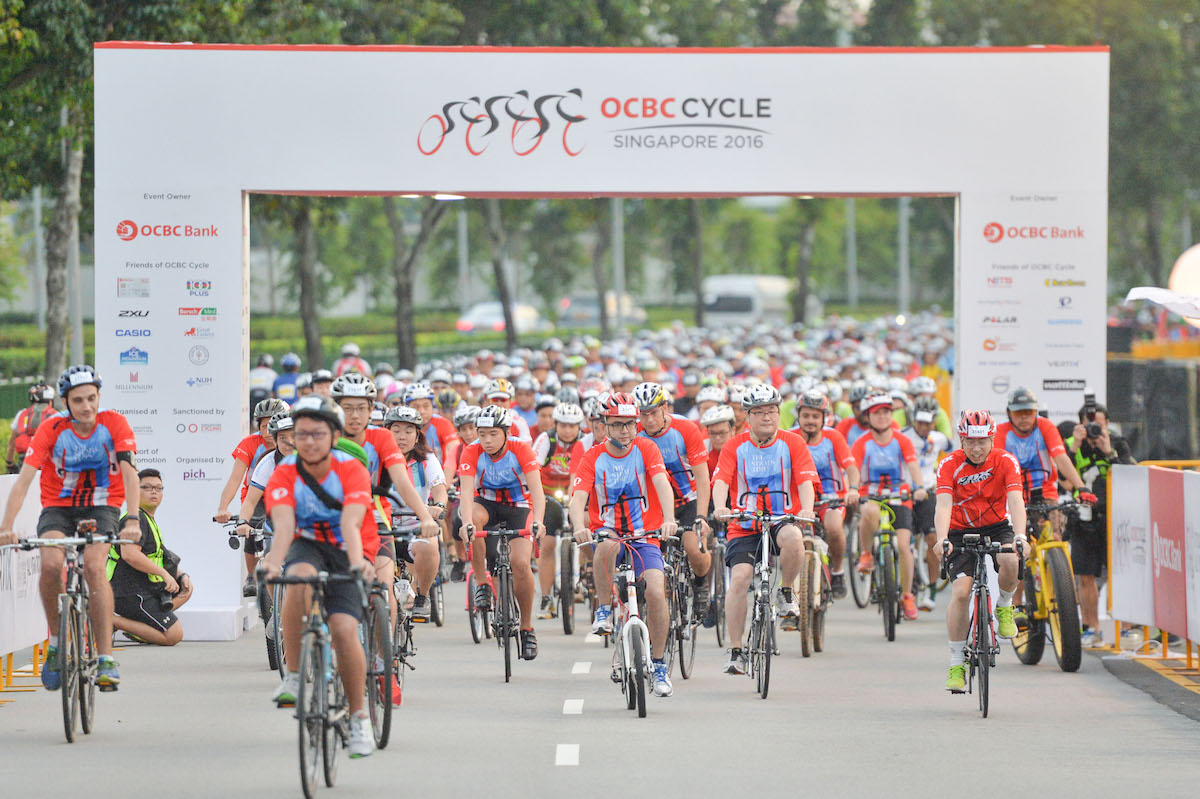 DRAWING IN BOTH LOCAL AND REGIONAL CYCLING COMMUNITIES

THE second edition of OCBC Cycle saw nearly 7,000 cycling fans participate in both competitive and non-competitive events over two exciting days at the Singapore Sports Hub.

Day two of OCBC Cycle 2016 saw 6,400 cyclists of all ages take part in the event’s non-competitive mass participation categories—The Sportive Ride (42km) and The Straits Times Ride (23km). Joining 4,300 participants in The Sportive Ride were champions of this year’s OCBC Cycle Southeast Asia (SEA) Championship – Team Malaysia – which took place yesterday at the Singapore Sports Hub. The regional cycling power house successfully defended their championship title and were invited to be part of the community ride. They were joined by Cambodia, Myanmar and Philippines.

“It’s my first time participating in OCBC Cycle. It’s great to be cycling with so many cyclists on this cool and breezy morning. Being able to be on the roads, enjoying the Singapore skyline is a wonderful experience. The route was smooth with some challenging parts near the Sheares Bridge. I hope more Singaporeans will join us and take on cycling as part of leisure and a form of transportation. Safe cycling and cycling together is a great way to get Singaporeans more active,” said Grace Fu, Minister for Culture, Community and Youth, who enjoyed the active Sunday morning.

Participants rode along a scenic route that began at Nicoll Highway and ended at the iconic National Stadium. The route, which stretched along the southern part of Singapore from East Coast Parkway to Keppel Viaduct in the West, offered cyclists a mesmerising view of Singapore’s landmarks, such as Marina Bay Sands, Gardens by the Bay, the Central Business District and Mount Faber.

“It’s my first time riding The Sportive Ride. I thought it was very fun and well- coordinated. There were a lot of bridges, but I managed to finish it within 1 hour 30 minutes. We even took selfies while riding. The finishing point into the National Stadium was a great way to end the ride,” said Mohan Jaiganesh.

Echoing his sentiments was 44-year-old Nicole Quek, a participant in The Straits Times Ride: “The slopes were challenging but the entire ride was very scenic. It feels really good to be on the Singapore roads when there are no cars. I think overall it was a good mix of scenery, admiring the high rises warming us up, before moving on to the slopes.”

A total of 12 organisations participated in The Business Times Cycle of Hope Corporate Bike Ride – a corporate charity ride that is part of OCBC Cycle's charity partnership programme. These organisations had half of their registration fees donated equally to four charities – The Business Times Budding Artists Fund, SportCares, the Dyslexia Association of Singapore and the NUHS Fund Limited, raising an amount of $23,195. The largest donor award went to Yinson Productions, who raised a total of $4,550.

The Longest Distance Award, which is given to the team that cycled the furthest collectively, was presented to Team emPower from Singapore Armed Forces, with a total of 7,728 kilometres covered by 184 of its participating employees.

One of OCBC Cycle’s lead-up initiatives include Project Training Wheels – where individuals were taught how to ride a bicycle over seven weeks, in time for the two- day mass cycling event.

“We’re delighted to see that cyclists enjoyed the scenic highlights of the route, and many enjoyed the experience of being able to finish their rides in the national stadium. It’s heartening to see participants having fun with friends and family at OCBC Cycle, and that it’s an event everyone looks forward to each year. Part of what heartens me is that four of our Project Training Wheels participants managed to complete the route. From not being able to cycle, to completing a distance of 23km within a span of seven weeks is really commendable,” said Koh Ching Ching, Head of Group Corporate Communications at OCBC Bank.

The community rides of OCBC Cycle 2016 were preceded by Saturday’s OCBC Cycle Speedway Championships in the morning and the OCBC Mighty Savers® Family and Kids Rides in the afternoon.

All information and photos by OCBC Cycle