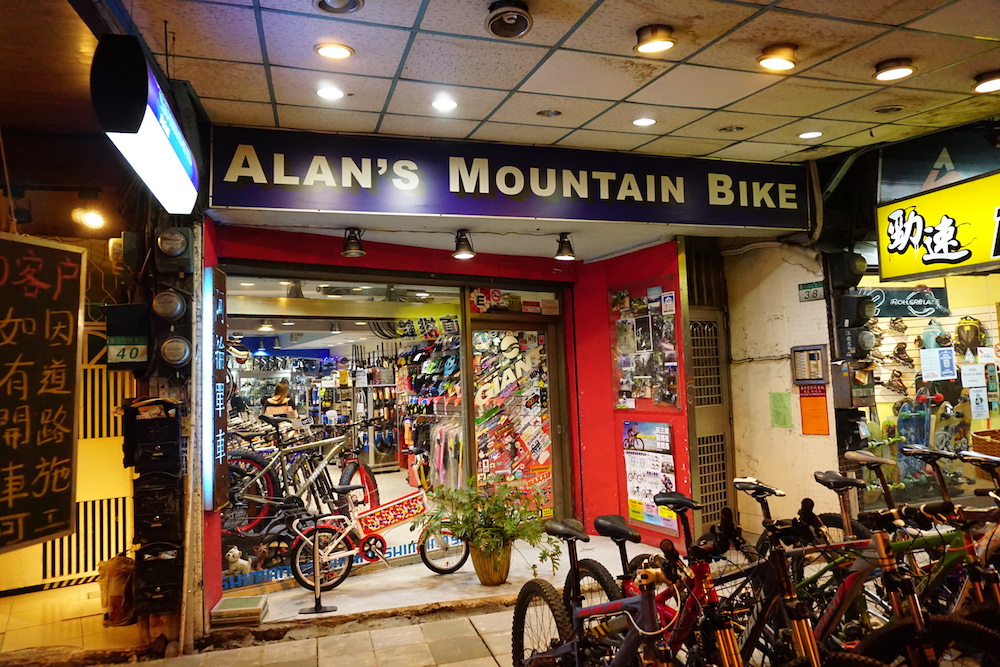 The recent visit to Taipei was a fruitful one. We visited the Taipei International Cycle Show 2016, met some rad folks who shared our ideology in cycling, and were given a first hand experience to ride in one of the trails in Taipei. One additional bonus from this trip was getting to know Mr Alan Ma, the owner of Alan's Bike and a well-known influencer in the Taiwanese mountain biking scene. A short chat with Alan gave me much insight on this sport in Taiwan. This newfound understanding sparked me into thinking about the MTB landscape back at home…

Roosevelt Road is what I would consider a suburb area, with many mechanic shops for motorcycles and cars. The buildings that line the roads are rather vintage. The road itself is wide and rapid – the kind that you would expect to be full of trucks during the day. Alan's Bike is situated along this busy road and stands out amongst the other workshops like a new kid on the block. However, I can assure you Alan's Bike is no new kid. The owner is in fact a true veteran in the Taipei mountain bike scene.

The facade of the shop is cozy – typical of Taiwanese shops with owners passionate about their craft. There is a cute bicycle and a tyre pump for visitors and passers-by to use should they need a quick air refill. On entering the shop, I was both surprised and admittedly slightly disappointed. Although the shop's signboard states "Alan's Mountain Bike", the shop is lined with 90% road bikes while the other 10% consists of entry to mid level mountain bikes. Of course, this confirms what I was aware of in the case with Taiwanese bike shops. Road cycling is in way higher demand than mountain biking in Taipei, as well as the whole of Taiwan. I told Alan that I understand that road and urban bicycles form the main bulk of demand in Taiwan, thus the disproportionate display. Road and urban cycling is more popular largely due to the convenience and perceived "glamor" of road and urban cycling as compared to mountain biking. Coupled with the fact that mountain biking requires the biker to first get to the trail before they get to enjoy roughing it out and getting muddy, it is not as conveniently accessible as road or urban cycling.

Alan has been mountain biking for nearly 30 years. Back when mountain biking was still a sport when basic explanation was needed whenever someone said they were into this sport. Over the years, he has acquired an impressive collection of memorabilia from his races and events. On top of these physical mementoes, Alan's most valuable asset from being in the scene so long seems to be his deep understanding of the mountain biking culture, and its adaptation in Taiwan. Sensing this deep love and understanding from the sport, I would have hoped for a longer chat with him. But as it was still business hours at the shop, I felt that I should find another occasion to have a lengthier chat with a ride thrown in some day day. Anyhow, I managed to get a quick scoop from this guru during our short chat. Throughout the chat, I could feel his passion for the sport as he described every experience he had on mountain biking with an enthusiasm and energy much like a school boy. Quite infectious I'd say. Alan spares no effort in trying to promote mountain biking. He has a facebook group page – Alan's Bike MTB XXC and a nice photo board which he hangs at the store front to share the happy moments of mountain biking.

The cycling sports scene is dominated by road cycling in Taiwan. Mountain biking is still considered a niche after all these years. Currently there are about 3 – 4 more well-known trails that are near Taipei and frequented by the city dwellers. Some names to note are: MaoKong 貓空, WuZhiShan五指山 and another section of the mountain FengGuiZui 風櫃嘴. For those who have more time, they can always visit the trails in Taichung, Yilan and other nearby regions. Now that's the privilege of living in a big country!

Mountain bikers around the world love GoPro or POV videos. And Taipei mountain bikers are no different. The exceptionally good runs are usually shared in their group pages. Here lies a point that I noticed about Taiwanese mountain bikers' behaving (and Taiwanese in general too). They tend to be very ready to encourage each other on social media. A good shot or video edit could easily chalk up 3-digits counts of thumbs up approvals. Just a simple observation.

With regards to bike choices, the Taiwanese bikers I met are not as fascinated with long travel bikes as the bikers in Singapore. This peculiar taste of Singaporean bikers preferring longer travel bikes seem quite unique. In fact, besides the gravity riders I met in Indonesia and Chiangmai Thailand, I think there are few other communities as crazy over a slightly overkill, more-bike-than-you-need sentiment when choosing a bike than the Singaporeans. Could it be the "kiasu and fashion-following Singaporean" at play here? Or Singaporean just want to be prepared for the Zombie apocalypse? Or a one-bike-is-all-you-need-but-I'd-rather-be-ready-for-Whistler syndrome. Well, nothing wrong with dreaming big if you don't mind the steeper learning or training curve I guess … (but this trend seems to be moving towards Enduro bikes gradually) … and sorry … I digressed.

This is one part I have to highlight that has made me impressed and yet empathetic. Somewhat a dilemma.

I was told that there is no official mountain biking trail building permits given in Taipei. While there are authorities advocating and facilitating the building of bike lanes and commuter bike programs, the off-road scene is largely self-governed and self-maintained. The mountain bikers basically co-exist with hikers. Wherever they think is appropriate to ride, they would "join in" to the trail or simply ride out new trails. The general sentiment for trail riders (not dirt jumpers) is that they believe in riding a trail from scratch, as opposed to digging a trail out and then riding it. This keep things natural. Basic maintenance follows the frequent use.

While I understand that different communities have different preference to how the trails should be, I am also aware that such culture are partly shaped by other factors like government intervention, stake holders' opinions as well as feedback and the support from the rest of the mountain bikers. While the Taiwanese's way of creating new trails may work well for them at the moment, (and it seems to work in varying degrees for mountain bikers in Thailand and Indonesia too from what I see) this system may not be a permanent solution for the mountain bike community. When the sport eventually grows to a substantial enough population, in which case the authorities would take note of its impact on the land, the situation may change. All said, I am bearing in mind that all these countries with a peaceful self governing system have vast natural land, and usage saturation is not going to be felt any time soon.

Nonetheless, the above observation led me to think that: Singapore is a small, gravely land-scarce country, and such a system of trail building may not work. So the end result for Singapore is a highly controlled, organized yet relatively well-planned network of trails that caters to all types of mountain-bikers. I digressed again.

One thing I hold in respect of the Taipei mountain biking community is the mutual respect and seemingly good relationship between hikers and mountain bikers.

During our short ride, we noticed the mountain bikers are generally very polite and caring to the hikers. Maybe this is due to the fact that there is no exclusive mountain bike trails there. With this sharing of trails in mind, both bikers and hikers simply learn to accommodate and accept each other as part of the trail. When approaching descends, it seems to be the bikers' duty to see that the descend route is clear of hikers. If there are hikers climbing up, they would wait for them to finish the climb first. It is not the norm for bikers to bomb down while the hiker stands in mid slope. Patience and mutual respect is the the driving force here.

And with regards to trail maintenance, both hikers and bikers are able to work together to do the necessary.

It was indeed an enriching chat with Alan. Coupled with my first hand experience riding with another local mountain biker at WuzhuShan Trail, I can say that we have a good introduction of how the Taipei mountain biking community and culture is like. While we may be different in some finer areas, we all share the same passion in mountain biking. It's that same smile when we describe a recent ride. That same enthusiasm when we talk about some new toys. That same warmth when we meet fellow bikers. In areas where we differ, we pick up each others' strengths. Let's ride!