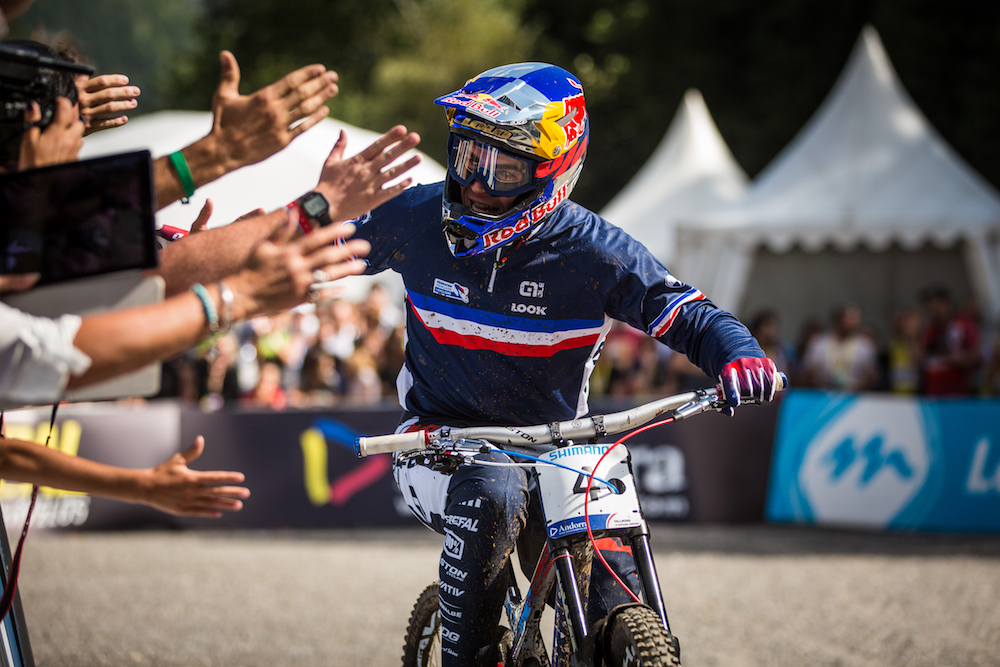 WITH SRAM TO FORM DOWNHILL TEAM

Specialized will partner with Pure Agency in 2016 to form a new Specialized Gravity Team, supporting the 2015 World Champion Loic Bruni, 2014 Junior World Champion Loris Vergier and first year Canadian junior Finn Iles on the UCI World Cup circuit. The team will all be racing aboard Specialized bikes and select equipment pieces next season.

Troy Brosnan will remain and star on the Specialized Racing Factory team, a separate set up, but with the same ambition.

Loic Bruni had this to say about the change, “I'm really excited about changing my rig for many reasons and it gives me coherence in the way I see my career. The team and I have worked hard during the past few years to reach a high level. We’re all ambitious and able to deliver really professional work while still having fun. I was really seduced by joining such a big family, even if this brand already has the biggest history, I'm excited about being part of it, it’s always been a dream. Reaching this step is a big satisfaction for me and the team, it is what we need and we know Specialized is the right partner for new things. I'm looking forward to ride well with my rainbow jersey and the Demo, of course, I'll try to do great stuff with it, we are already working on the bike and tires to be ready for the season 2016 that is promised to be a blast.”

“2015 was in many ways our best season yet, said Benno Williet, Team Manager for Specialized’s Factory MTB programs, the overall structure of the team finally came together and the results the guys achieved on the race course really backed that up. At the end of the season, we bid farewell to Aaron Gwin after an awesome season but at the same time we look forward to the future and are excited to be supporting more riders than ever before. Between Troy on our factory team and then also Loic, Loris and Finn – four of the very best riders in the world will board a Demo at the highest level of completion. It is a youthful, super talented roster throughout so it is safe to say the future is bright!"

With a full team presentation to follow in early 2016, Loic, Loris and Finn will rely on the radical S-Works Demo 8 carbon downhill race frame with single-sided seat mast as well as Specialized 2FO shoes and full compliment of Downhill Tires.

“I was really proud to work with our partners and in the 8 years we created something really special, but when we had first contact with Specialized, we felt that it was time to move. The opportunity was unique, because we had the chance to keep the same working process with same staff and riders. They understood that a good result is not just a good athlete or the best bike, but also a great atmosphere, where everybody in the team is able to make his own contribution to perform. To be honest, we also had other good financial offer, a higher one, but it was definitely a different way of work, and it was not the first choice of the key guys in the team. When the boys tested the bike, it confirmed everything. We have the feeling too that R&D is really strong and all details are well thought on the bike. One last detail, but maybe the most important detail in our decision: Loic and I received a personal message from M. Sinyard, and I don’t know a lot of bosses who are involved like this in Sports Marketing. It showed us how the company is passionate about DH and racing. We really appreciated this” – Laurent Delorme – Pure Agency Manager

Pure Agency is a sports marketing, event and team/athletes management agency that had worked with brands like Lapierre, Saab, Solomon, Skoda, Michelin and Hutchinson.

We look forward to watching the team in action in 2016!

Information and photos by Specialized