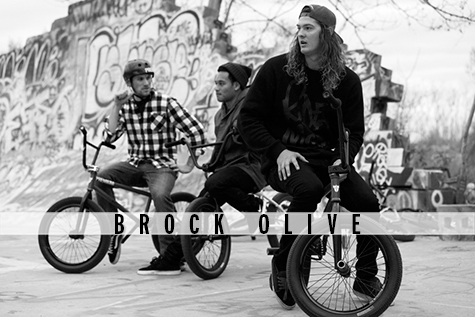 (Brock Olive rolls backwards and jumps off the curb while spinning the bars. Combo.)

The Premium team riders were in New York on a trip to film for a RIDEBMX.com edit some time in May this year.  Along with the video shoot, the team was also interviewed for an article for the American magazine and TM Colin Mackay also made time for the 2016 Premium BMX catalog shoot. Riding along were New York local Stephon Fung who took the chores of showing the spots to the riders. Josh de Reus flew in from New Zealand and it took Brock Olive 30 hours to make the trip to NYC from Australia. Blake Peters had it fairly easy coming from San Diego compared to the two international team members. Premium star Chad Kerley got injured prior to the trip and is healing up back in San Diego but Haro rider Mike Gray took the opportunity to join the Premium brothers on this east coast trip. We caught up with 22 year old Australian Brock Olive while he had breakfast in New York.

(Talking faster than he can eat!)

It was a bit of a trip for you to get to NY. How long did it take you to meet up with the rest of the Premium team?

Brock: It was about 30 hours all up but there was nobody next to me so it wasn't too bad.

Who all made it to New York for the trip?

What places have you ridden already and what spots are on the program?

Brock: Stephon lives nearby so he is taking us to all the hotspots.

You've also been filming for a Premium edit. When can we expect to see that?

Brock: Yes it should be out within a week. I actually finished filming for it right before I flew to NY. Biggie kills it with filming so it should be sweet.

Will footage of this trip be in that video as well?

Brock: No we are filming here for a Ride BMX exclusive. It will come out with the magazine article in a couple months.

With RIDEBMX present, are you extra motivated to get some shots?

Brock: For sure. Jeff Z is the man.

What Premium set-up do you currently run?

(The un-stickered version of the Gumball3000 vehicle that Coco is in. Bike on the bike rack.)

(The Tripod seat – seatpost set up is gaining popularity. It requires a special seat. Premium had came up with this embroidered Chad Kerley seat which isn't too skinny, isn't too fat, isn't too hard, so it's just about right. )

All information and photos by Premium BMX