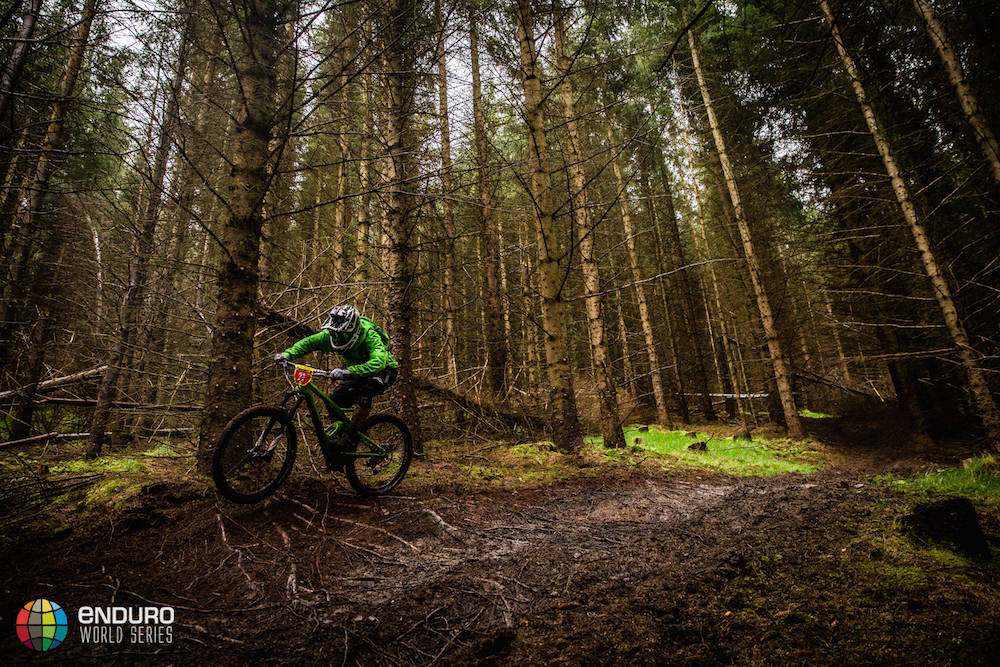 EVENT: ENDURO WORLD SERIES LANDS IN SCOTLAND FOR ROUND THREE

LANDS IN SCOTLAND FOR ROUND THREE

The Enduro World Series has sailed across the Irish sea and landed in Scotland for round three of the series, the Cannondale Alpine Bikes World Enduro at TweedLove. Read on for the details.

FROM IRELAND TO SCOTLAND

Swapping the Emerald Isle for the equally green hills of the Tweed Valley, that’s about where the similarities between these two races end. If Ireland was a fairytale, Scotland is more of a suspense story – complete with all the plot twists the genre implies. With eight stages, two long days of racing and a weekend of wild weather in store, who makes it on to the top step of the podium is anyone’s guess.

Riders will be up against eight stages across two days, with an intense 2,695 metres of climbing over 93km. As well as the physicality of the liaisons, the stages themselves are technical – many riders found themselves caught off guard by them last year. Steep drops and dark forests tripped up a lot of racers, but not Tracy Moseley and Nico Lau who secured the win here in 2014.

WHOSE GAME IS IT FOR THIS ROUND?

One rider expected to do well here is man of the hour Greg Callaghan. Riding high after his momentous win last weekend, there’s every chance the Irish man could do something special. He’s familiar with the trails and placed in the top ten last year – he’s also at an advantage that he’s used to riding in the wet.

The area has produced some outstanding talent over the years, so there’s plenty of local riders capable of mixing things up at the top of the table. Scotland’s Joe Barnes had his first taste of the podium when he came third here last year and he was also on form in Ireland last weekend, he was on course for a top three finish until a puncture ended his race. Former downhill world champion Ruaridh Cunningham won a stage here last year and will be looking for more of the same, but unfortunately a crash in practice has ruled out local hero Gary Forrest. In the master’s category living legend and former world cup downhiller Crawford Carrick Anderson will be looking to make his mark, whilst in the women’s race all eyes will be on Peebles’ own Katy Winton.

Also right at home on these trails is Chris Ball, Managing Director of the Enduro World Series, who lives just a stone’s throw from the race. He said: “This weekend’s race is going to be really different to Ireland and not just because of the weather. The trails here are much steeper and two full days of racing means managing fatigue will be really important.

“It’s going to be a tough race, but the trails are so much fun and the fans here are so enthusiastic that I think all the riders are in for a really good time.”

Neil Dalgleish, TweedLove’s Director, said: “The Tweed Valley has got something to test every rider, and that’s reflected in the stages. It’s two big days in the saddle so fitness will be key, but there’s plenty of skill needed on the technical sections too. The possibility of rain means that conditions will be tough – it’s going to make for a very exciting race.

“But TweedLove is about more than just the racing, it’s about the local riding community coming together to work really hard, put on an amazing event and showcase what is we do here all year round – and that’s ride the first class trails we have in our back yard. It’s incredible to see the way the local area has embraced this event and I couldn’t be prouder of what we’ve achieved together.”

The Enduro World Series (EWS) was created in October 2012 with the aim of uniting the world's mountain bike enduro racing community The Enduro World Series links the largest mountain bike enduro events in the world with the best trails possible and exists to deliver the best racing, most relaxed atmosphere and rider-focused organization possible. The team behind the Enduro World Series has one goal – to globally develop and progress the discipline of enduro for the riders, the sport and the industry. With the shared experience of Italian Superenduro, French Enduro Series, Crankworx and World Cup racing, the Enduro World Series offers international competitions unlike any before it. The Enduro Mountain Bike Association’s (EMBA) Board of Directors is supported by an industry Advisory Board to reflect and respond to the riding community that includes Santa Cruz Bicycles’ Rob Roskopp, Fox Shox’ Mark Fitzsimmon, SRAM’s Jon Cancellier, photographer Sven Martin and riders Tracy Moseley, Jerome Clementz and Curtis Keene.