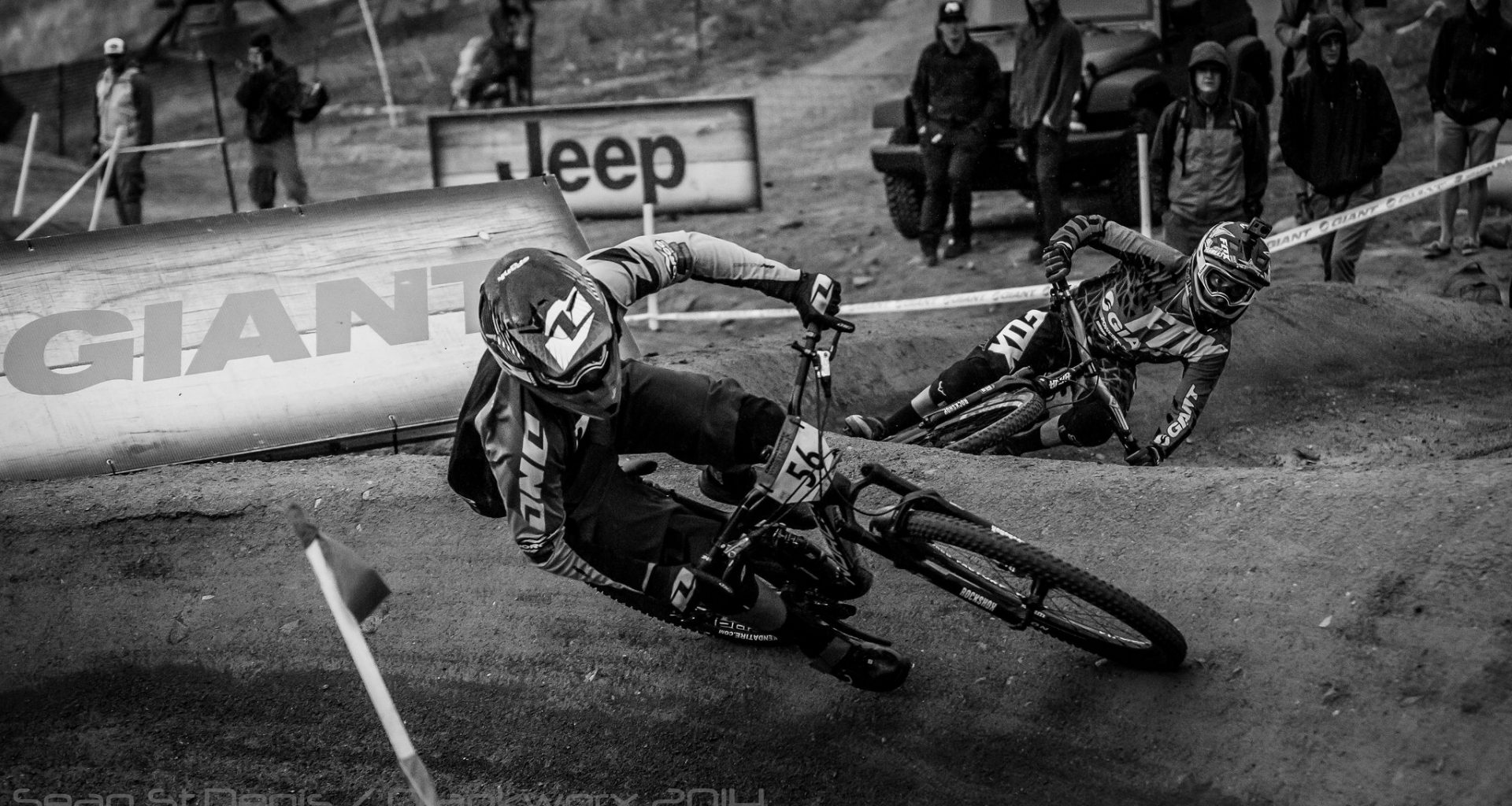 ROPELATO AND KINTNER HAMMER THROUGH TO VICTORY

WHISTLER, BC August 15, 2014 – The best dual slalom racers in the mountain biking world layed it all out on the wet dirt at Crankworx today, giving spectators in Whistler and around the world a master-class in racing for the GIANT Dual Slalom. At the end of it all, Mitch Ropelato (USA) and Jill Kintner (USA) pedaled their way to victory to top their respective Pro podiums.

“I was a little bit nervous those first few rounds. I went up against some really difficult dudes all through the day, so the day was a little stressful,” said an elated Ropelato, who added, laughing: “but I made it through alive so it’s a good day.”

The Big Final between Ropelato and Barry Nobles (USA) was certainly cause for tension – Nobles was clocking solid times throughout the day’s racing as well as coming off a first place finish at the Ultimate Pump Track Challenge presented by RockShox the night before.

“Dude was solid all day – you had to be to get the final two, so I was definitely nervous,” said Ropelato of his final adversary, who jumped ahead of him out of the gate in the first round. “I was just going ham on all the corners on the red course and made up a little bit of time.  Then blue course I was like, ‘last run of the weekend, you better freakin’ hammer it!’ I gave it everything I had and luckily I came out with the win, so I’m pumped.”

The tension was equally tight on the women’s side, with an extra element of difficulty thrown into the mix – the small number of Pro Women competitors, six in total, meant they had a lot of time to fill before their semi-final.

“I felt really good all day on the track,” said Kintner of her Training and Time Trials runs earlier in the day. “But then you go from sitting for like an hour to straight into the heat, so that was pretty challenging.”

Competing against Anneke Beerten (NED) in the Pro Women’s Big Final, Kintner’s win was no easy feat. Beerten took the first round in the blue lane, rumoured to be the faster of the two, leaving Kintner is a do-or-die position.

“I was a little nervous coming into that final one being a little bit down,” said Kintner. “But tight racing is always a little bit more exciting for the fans.”

In the end, Kintner’s time on her second run was enough to push her past Beerten for the win, marking the second year in a row she’s won the event.

Rounding out the women’s podium was last night’s winner of the women’s pump track, Caroline Buchanan (AUS). Buchanan narrowly missed a spot in the Big Final, but a self-admission of a missed gate forced the judges to discount the run that would have put her through. Instead, Buchanan battled for third in the small final, beating Alanna Columb (NZL) and taking the final podium spot.

Overall, tonight’s event earned strong reviews from those who were closest to the action – the racers.

“Crankworx is just so much fun, and I think this course is an improvement over the past couple years,” Said Kintner. “A little faster, a little rougher, more turning, so it was good.”

Aside from the excitement of a podium finish, tonight’s race also earns two of the racers points toward a further distinction – the battle for King and Queen of Crankworx is heating up as the festival heads into its final days. Second place finishers Nobles and Beerten are both strong contenders, though ultimately the decision rests on the results of Sunday’s Canadian Open DH.