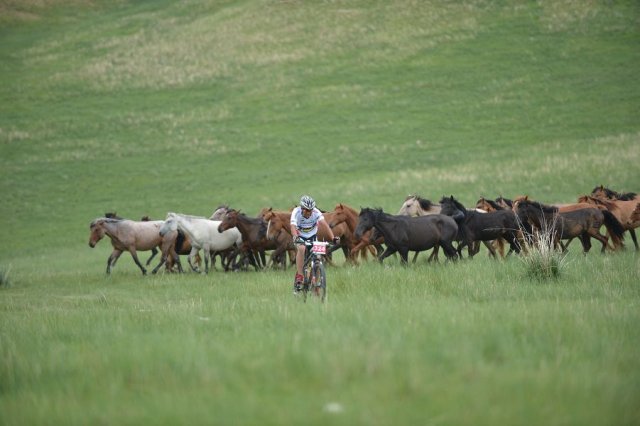 Many mountain bikers travel to oversea riding destinations in search of bigger mountains and bigger challenges. Very often it leads them to natural downhill destinations like Chiangmai or bike parks in Indonesia, New Zealand or Australia. Enter a new level of challenge: speed coupled with splendid big country grandeur and immersing in another culture. We are talking about Inner Mongolia. We read a lot about how vast the Inner Mongolian lands are, and the history that it held. It's time to ride the same grounds that a great historical figure once trotted.

The first Genghis Khan MTB Adventure took place in 2007, with the Grassland Marathon having its inaugural edition one year later in 2008. Since then, the unique Inner Mongolian grassland event in Xiwuqi has quickly established itself as a popular annual tradition for bikers, runners, adventurists and other alternative culture lovers.

A significant and successful re-design of the competition in 2012 led to record participant numbers and higher media coverage, particularly for the Grassland Marathon. This successful trend accelerated even more in 2013 with again a new participation record and a closure of the registrations one month before the event date – a feat that is very uncommon in China. The 8th Genghis Khan Festival will take place between 4 and 6 July 2014, with the running competition traditionally in the morning of the second day, 5 July.

The 2014 Genghis Khan MTB Adventure & Grassland Marathon is organised by the Xiwuqi Municipal Government in cooperation with Nordic Ways Beijing. First organised in 2007, it consists of two different sports disciplines: mountain biking and cross country running. Mountainbikers are being offered a 3-day stage competition with a total length of 200km, while runners get the chance of running a full marathon distance offroad. Both events take place in the grasslands surrounding Xiwuqi town and cater for all levels of athletes as shorter distances are also available.

The venue for Genghis Khan MTB Adventure is Xiwuqi 西乌旗 (Short for Xiwuzhumuqin Qi 西乌珠穆沁旗), a small town about 140 km from Xilinhaote 锡林浩特 in the northern part of Inner Mongolia Autonomous Region.

The MTB courses saw a successful facelift in 2012 and were further fine-tuned in 2013 to provide a truly unique opportunity for competitive and less-competitive participants to enjoy the Xiwuqi grasslands. The grasslands are not flat, but also not mountainous. A number of rather short hills need to be conquered at each stage. The terrain is non-technical when dry: hardcore mountain bikers say it is 'easy' but the beauty of the area makes up for that. The stages are suited for 29" wheels.

The three courses are endorsed by the relevant local authorities in Xiwuqi and will be left unaltered for the most part in 2014. However, as cattle fences erected by local farmers here and there are unpredictable, and water creeks are subject to the amount of snow and rainfall in the early part of the year, some changes will always have to be made. These will be confirmed by the Technical Mission early May. Stage 1 63 km, Stage 2 43.5km and stage 3 100 km

The 8th Genghis Khan Festival in Inner Mongolia's Xiwuqi opens this 4th July afternoon with the traditional 63km long first stage of the 3-day mountain bike adventure race. No fewer than 1200 participants will either bike or run through some of the most breathtaking grassland scenery in China this year – a new record for the organization.

The growth of the Genghis Khan Festival, which began with its sixth edition in 2012, continues exponentially and is now stretching the host town's accommodation availability to its limits. Xiwuqi is a town of roughly 50,000 inhabitants – mainly ethnic Mongolians – two hours north of Xilinhot, a city-with-an-airstrip that features as the gateway to the event. A cap of 1200 participants was set by the organizing company Nordic Ways Beijing, but that number was already reached towards the end of April.

The MTB Adventure will see 400 bikers at the starting line for a three-day stage race over a total distance of just over 200 kilometres (or 85 kilometres for beginners). Day 1 takes participants on a loop passed the statue of Genghis Khan's horses, Siriguleng and Halagatu, and is followed by a shorter 43km stage and a big finale of 100km on the last day. After Mongolian riders dominated the last two editions, the race looks more open this season with Chinese best young prospect Hu Hao from Nanjing as a top favourite along Ulanbaatar's Myagmarsuren Baasankhuu. 2012 and 2013 champion Altansukh Altanzul cannot defend his title in Xiwuqi as he is pursuing a professional cycling career.

Team Specialized's Hu Hao made an impressive grassland debut for a 19-year-old twelve months ago, resulting in a stage podium finish (3rd on day 2) and a fourth place overall. He proved to have matured since then with great rides in the MBC and Huang Shan, and should be in a position to challenge Baasankhuu, who finished one place ahead of him in the overall ranking in 2013. In any case, the races are expected to look very different with more tactics at play rather than the suffocating pace-setting from the get-go as we saw from the Mongolian armada.

The list of outsiders for stage and overall victory is large. Team Chiru's leader Piere-Arnaud Le Magnan is physically better prepared than ever, having just finished a bunch of tough races in Italy and France, and using his vast racing intelligence he could cause an upset – especially should the weather turn tricky. Le Magnan will also be backed up by Canada's Fraser Young, who was reportedly disappointed by his own "below par" performance last year and keen to show the best of himself this year. Team WTB is banking on Daniel Carruthers, the Hangzhou-based New Zealander, who has also shown great form in recent road races. If Carruthers manages to hang on to the leading group they will find him hard to beat in the final sprint. Team Chain Reaction Cycles is entering two strong Russian riders in the mix for top results, Alexey Chaklov and Ivan Brinko, and South Africa's Alistair Haigh-Smith is another one to watch for Team Enervit. As always with an international amateur event, one never really knows how fast everybody on the start list really is,  so we will have to wait and see.

What will shed a bit of light on some of the rider's current ability is the 5.8km long prologue or individual time trial on Friday morning. A new addition to the MTB programme of the Genghis Khan Festival, which will see a number of fast local bikers up against the star riders mentioned above.

The Genghis Khan MTB Adventure also sees more and more women at the starting line. Among the favourites for this year's race are China's Wang Xueli and Belgium's Veerle Buytaert.

Mountain biking in the grasslands around Xiwuqi is generally not very technical and therefore accessible to people of all levels. The registrations for the 2015 event will open soon after this year's event and as the maximum cap will remain at 1200 participants it is recommended to register early.

Preparing for the Race

Adequate training and conditioning is definitely needed for a 3-stage 200 km epic ride even if the terrain may sound more mellow than some killer climbs you had experienced.

The main specialty food in Inner Mongolia is mutton and milk products. There is limited western food, especially for breakfast where there will be some milk, yogurt and vegetables/fruit, along with Chinese rice and noodles, but take with you some food of your own if you feel it might be hard for you to eat the local food. Instant coffee is available, however.

Over the past few years, “Grassland Crazy Night” at the Khan Yurt City on Saturday night is one of the greatest attractions of the Genghis Khan Festival. Khan Yurt City is the National AA tourism site, located 18 km away from Xiwuqi, and has 20 sq km in total. It is a good place for sightseeing and witness the Mongolian ethnic culture and grassland scenery, on top of having some other entertainment activities. Its layout is based on the blue print of Khan City of ascending ceremony in TV series “Genghis Khan”. The construction style of Mongolian Khan City is in line with Mongolia tribal style of Yuan Dynasty, which consists of mass yurts with a grand golden-roof yurt in the center.

There is no bus in Xiwuqi, but you could take taxi for transportation. The price is under 10 RMB within the town.

Flying to Xiwuqi could be tedious, but it's all worth it to visit such exotic destination and able to ride there. The usual way is to enter via international flight to Beijing and transfer to domestic flights. You could do your online research for the best way to get there with your bike and gears or you could consult an expert on this. Singapore-based travel agency Travel Holidays is an expert exotic tours in Inner Mongolia, Tibet and Nepal. Consult them on how to get your group up there for a ride. Or if there are enough interest for a 2015 Genghis Khan MTB Adventure, Bikezilla may form a group. Let us hear from you. Scroll down for more photos.