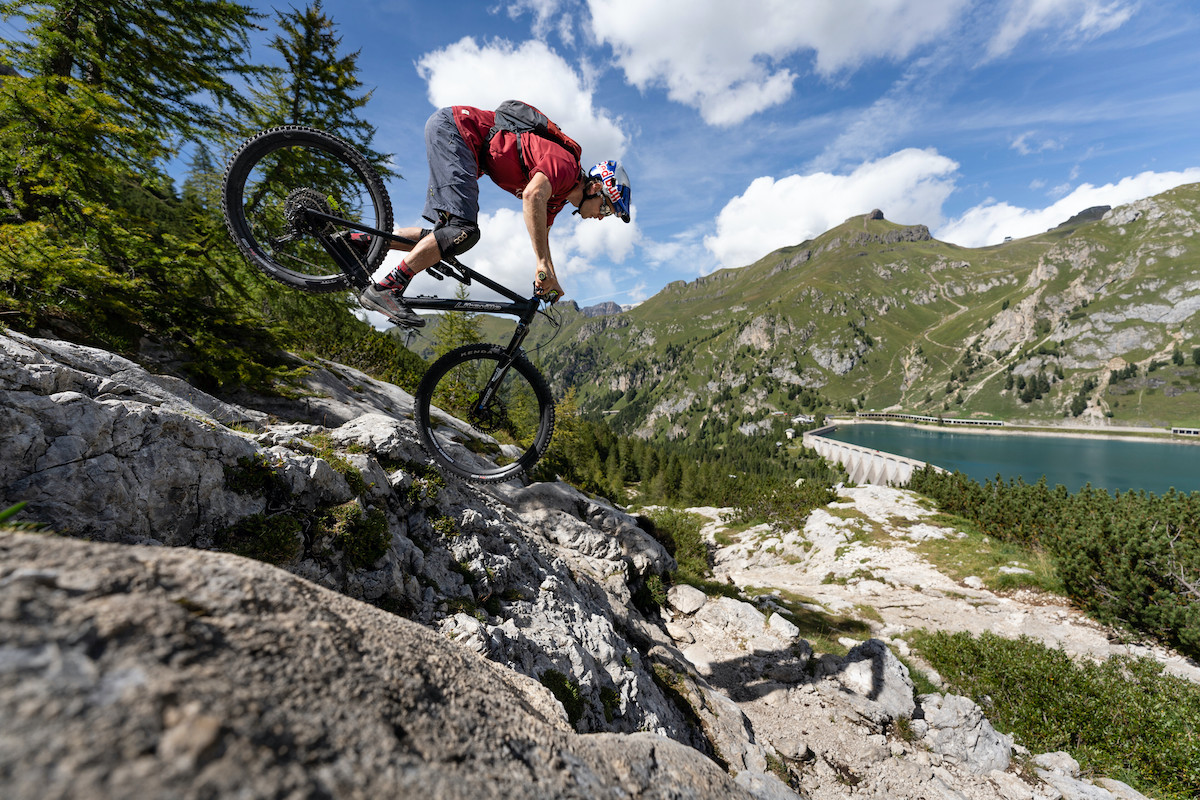 Oehler, who holds the world records in bike high jump and 400m hurdles on a bike, rode around the decadent, historic Grand Hotel de l’Europe in the Austrian resort of Bad Gastein last year and has followed up with another visually pleasing project.

HERE’S WHAT OEHLER HAD TO SAY ABOUT HOW THE FILM CAME TOGETHER, THE CHALLENGES AND THE TRICKS YOU DIDN’T SEE:

The Dolomites form a stunning backdrop, but why did you choose to shoot there?

I already knew the general area from mountain biking there previously. But going up to the hut we shot from is quite unusual. It’s an unusual location to take your bike as it’s right at the top of the mountains. Usually, the huts are a little lower but here you have to climb up to the peak if you want to have nice views. This was one of the main reasons we chose to go there, because it was so high.

You’ve ridden similar sections before. What was your experience riding there for this video?

It’s similar to other areas I’ve ridden so I know how the rocks and the trails would look, approximately. Obviously I didn’t know what the sections would be like exactly. It wasn’t all shot on one location either; we changed locations to have more exposed, high alpine trails with no room for error. I love all kinds of mountain biking, but alpine riding is my favourite field. I have a strong trials background so when I stepped forward to the mountain biking scene I knew that with my technique I could ride a lot of trails that would be challenging for other riders with a different background.

What were the challenges riding in such a remote location?

Well, I slept really badly up there because of the high altitude. It’s more than 3,000 feet. I was in Nepal and Kurdistan before where we did some really high altitude routes and I was almost OK with the altitude, but still not really great. Usually (being at altitude) costs me a lot of sleep. In the Dolomites I would get up in the morning and it would be freezing. There’s a picture of me wrapped in blankets because it was super cold. It was very cloudy too. We were hoping for clear weather to have the most beautiful sunrise but it didn’t work out that way.

What other challenges did you encounter?

We went in late August which is a busy time in Italy. The weather was good so there were hundreds of Italians walking up the mountains. Usually when you take your bike up on the high alpine trails in Austria people aren’t happy to see you because it’s supposed to be a foot trail. When you do the same thing in Italy, they go crazy about it, they love it. They would stop and watch us. I’m used to bike trial demos with big audiences but when I do alpine riding I want to be by myself so it was a bit weird to have 20-25 people standing watching, then applauding when I did the section.

Did having a crowd put pressure on your performance?

No. You have to get a feel for your comfort zone. You usually don’t go over that comfort zone in alpine riding because the consequences can be serious. Usually when I’m doing demos I want to leave my comfort zone because of the spectators. So when we were filming I had to make sure I wasn’t doing it for the camera or the crowd, instead I had to only ride stuff that I would normally ride so it didn’t get too dangerous.

Some of the sections look very gnarly. Were there any scary moments?

With those exposed trails where I’m riding in the wall on a half metre of trail, it was quite a mind game. It was quite risky. I’d walked the trails before we went there to shoot and afterwards I had the section in my mind for a few weeks. At the time I wasn’t sure if I was going to ride certain sections and then on the shooting day, when we climbed up there, I was a little bit ahead of the crew so I thought ‘OK I can just go and ride it right now without the video or anyone watching’. The first thing I did when I got up there was put my helmet on and get it done for myself so I knew it was doable. Then we did everything again for the video.

Were there any cool moments that didn’t make the final edit?

There was one section around a hut by an old lift which they used to use to transport food up to the huts. The hut was small and quite wobbly. I made a little kicker of some rocks to get up there and back down. Unfortunately this didn’t make the final film because something didn’t work out well (from a filming perspective), I guess.