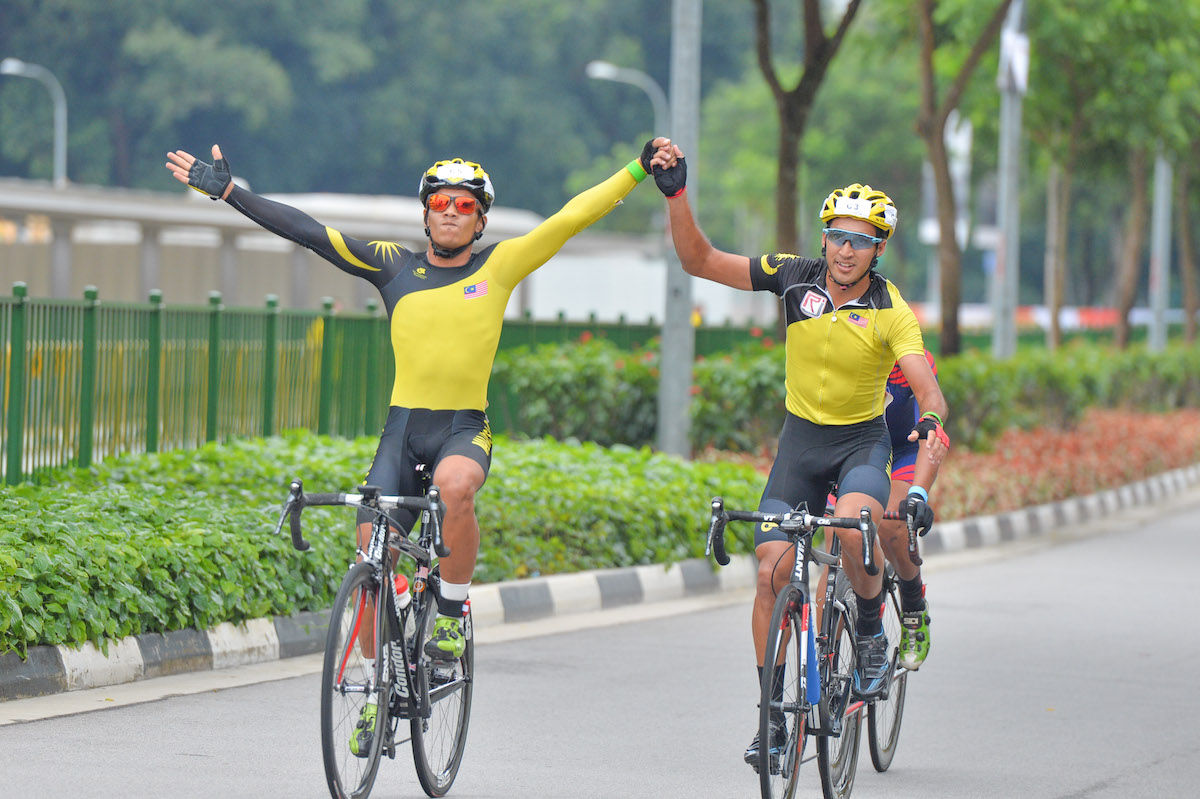 NEWS: MALAYSIA CRUISES TO VICTORY AT

Regional cycling powerhouse Malaysia proved its prowess once again at the OCBC Cycle Speedway Southeast Asian Championship held this morning at the Singapore Sports Hub by cruising to a comfortable victory over the Philippines and Brunei in the final. This is the team’s second Championship win after its maiden victory in last year’s inaugural edition.

Leading from start to finish, the boys in yellow were hardly challenged by their competitors as their lead rider built a sizeable lead straight from the flag off. The lead continued to grow after the switch-over at the halfway mark of the race with team captain Muhammad Fauzan Bin Ahmad Lutfi and Sofian Nabil Omar Bin Mohd Bakri lapping the chasing pack who had settled into a tactical battle for second place. The Malaysians won with a time of 18:05.283, bettering their winning time from last year by 39 seconds.

“We were confident about being able to defend our champion title this year. We had an advantage this year because some of the strong competitors such as Vietnam, Indonesia and Thailand were not present. We were not too worried about the semi- finals results and kept our focus on the finals instead. This was part of our strategy to win this unique race,” said Fauzan.

The battle for second place began at the switch-over, with the Filipinos and Bruneians giving up the challenge for first place and aiming for second place instead. The intense three-man sprint at the end saw the two Bruneians edging the lone Filipino to claim their spot behind the Malaysians by a whisker. The Bruneains finished with a timing of 20:07.523, while the Filipinos finished with with a timing of 20:07.583. However, due to a 10-second penalty at the halfway changeover, Philippines’ final finishing time was 20:17.583. The returning rider from the first five laps of the race did not get off his bike before the dismount line as he passed his wristband to his partner.

Brunei’s team captain, Azmi Bin Abd Hadzid, said: “I knew that the last Filipino rider is a sprinter, so I told my team mates to wait and follow that rider because I knew both my team mates in the second leg would do well sprinting to the finishing line. This is my second time participating in OCBC SEA Speedway Championship and my three other team mates are new to this format, so I gave them feedback on the race structure and motivated them to just believe in themselves. We supported each other through this race and I think that was important.”

In the morning’s qualifiers, Team Singapore, who placed second in last year’s competition, made a shock exit when they finished last in their heats. The team, which was grouped together with the Philippines and Brunei, was aiming to better their timing from last year but fell short of their goal. Their opponents set a blistering pace from the start which proved insurmountable despite a valiant fightback from anchor duo Junaidi bin Hashim and Gabriel Tan.

A visibly disappointed Ho Jun Rong, Team Singapore’s captain, said: “The race was a relatively good format. It’s not a format you will see in normal races but it’s good because it emphasises a lot on teamwork and team strategy. However, things never go according to plan. It’s a very dynamic race. Even if you plan it to the best of your abilities, things may go haywire. We are always looking at a long-term plan, which is towards SEA Games 2017. This is one of the races that we’re building the momentum towards. I guess we’ll use this race to identify our weaknesses and focus on the positives.”

Despite the defeat, national coach Adrian Ng agreed that there were positive takeaways for his charges. He said: "What I’m heartened about is, instead of blaming each other, everybody is quite encouraging. Going forward, it will help us to strengthen our bond together and, hopefully in the next race, we’ll be able to deliver the results.”

Joseph Cummings from Specialized Mavericks A was happy with the team’s win and the overall experience. “There were definitely improvements from last year’s edition of the OCBC Cycle Club Speedway Championship. It was very positive. We had a lot of fun and we practiced a lot for the last two weeks. It all went exactly to plan. There definitely is a need for more organised cycling in Singapore because the cycling community is growing. The inclusion of competitions like the OCBC Cycle Club Speedway Championship is something that cyclists want to have in Singapore.”

Jeffrey Goh, President of Singapore Cycling Federation (SCF) said, “We have participants coming from Southeast Asia region and our localised clubs here that are racing. I feel that this event can be more wonderful if we have more clubs in Singapore supporting these events. This year we have organised four to five SCF-sanctioned races, but we believe that the cycling community in Singapore has grown tremendously over the last five years. Cycling is the new golf now. I believe that if we continue on this way, the future for cycling in Singapore is great.”

All information and photo by OCBC Cycle