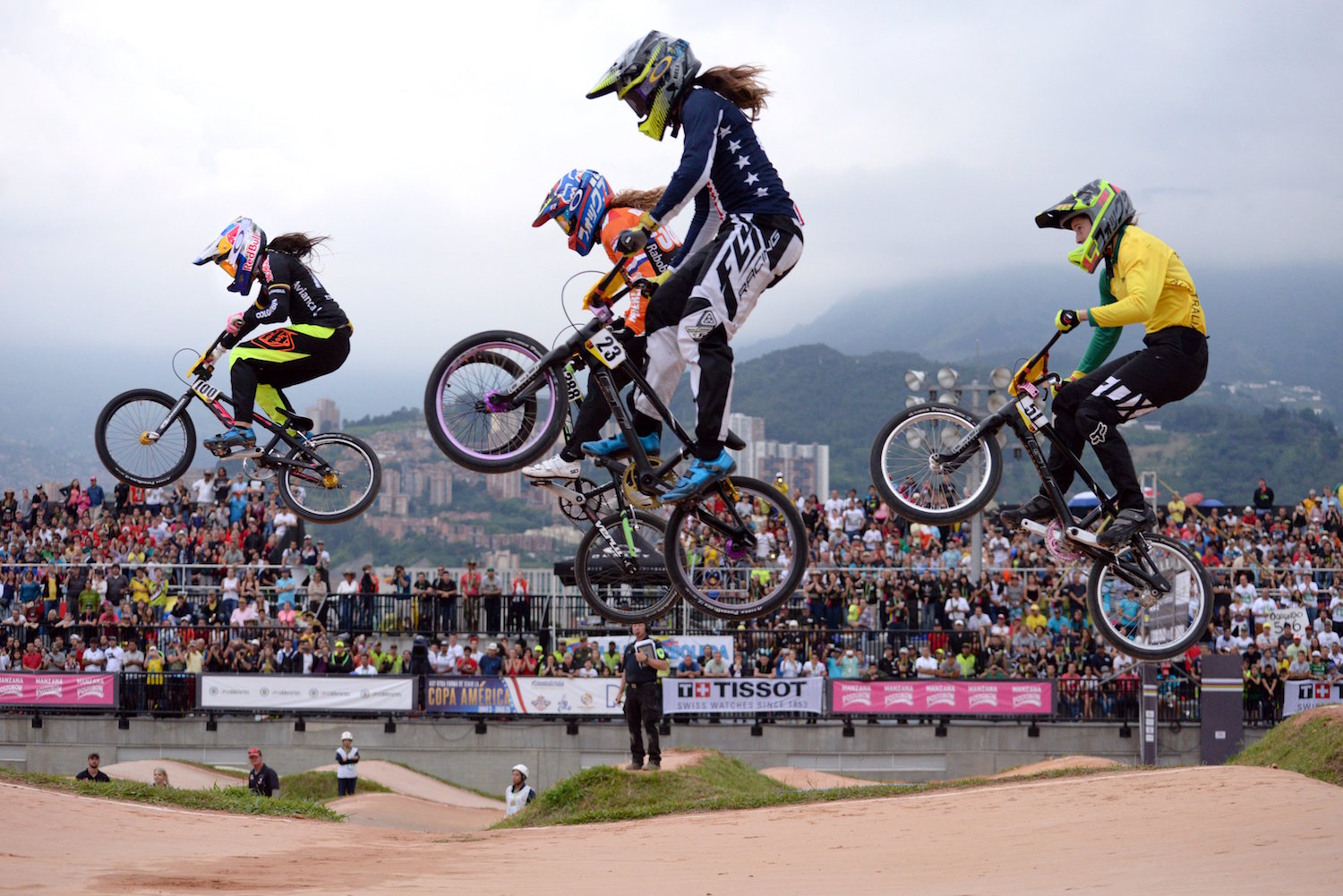 It wasn't an easy road for Mariana Pajon (COL) to make it to the final in the Elite Women class and claim the UCI BMX World title. After finishing third in the Time Trials Super final on Saturday the local favourite took the holeshot in the final but had Alise Post (USA) right on her tail. In a last attempt to move closer to the front, Alise Post lost momentum on the last part of the track which allowed Australian Caroline Buchanan to take second position. Post salvaged third place after Pajon had given the hometown crowd what they came to see. Mariana's victory on the track that was named after her will go down in the history books.

When the gate dropped for the Elite Men final Joris Daudet from France used the inside lane advantage to get the holeshot over 2015 Elite Men UCI BMX World Champion Niek Kimmann (NED). They were side by side going into turn one. The Dutchman could not find an opportunity to pass Daudet and settled for second place. American Nic Long was in last place coming out of turn one but miraculously made his way around five riders to claim the last podium spot and an Olympic spot on Team USA in the process. Daudet commented: "I was feeling really hungry today and wanted to prove to myself I could still do it. I'm super happy to become UCI World Champion, it's been a long road since the last one."

First year Junior rider Maynard Peel from New Zealand had to come from the outside to get to the front on the technical track in Medellin, Colombia. The strong rider profited from a mistake made by then leader Alex Tougas (CAN) who missed out on a podium spot by finishing fourth. Cedric Butti (SUI) and 2016 Junior Time Trials World Champion Mathis Ragot Richard (FRA) finished 3rd and 4th respectively. "I got on the gate and had a lot of nerves, but I took a few deep breaths and brought myself down to the process and everything went great," said Maynard Peel, 2016 Junior UCI BMX World Champion.

The most passing up front went on in the Junior Women final. Ruby Huisman (NED) left from gate 8 on the outside and came out of turn one in third position. Merel Smulders (NED) had taken the lead with a charging Natalia Afremova (RUS) right behind her. When Smulders cased a jump on the second straight and could not jump the last set, the Russian slipped inside of her but unclipped from her pedal, pushing Smulders to the outside. Huisman squeezed in on the inside to take the lead and held on to that position for an emotional win. Afremova got silver and bronze was for Silje Fiskebekk from Norway who had worked her way up to third place.

Information and photos by Red Bull