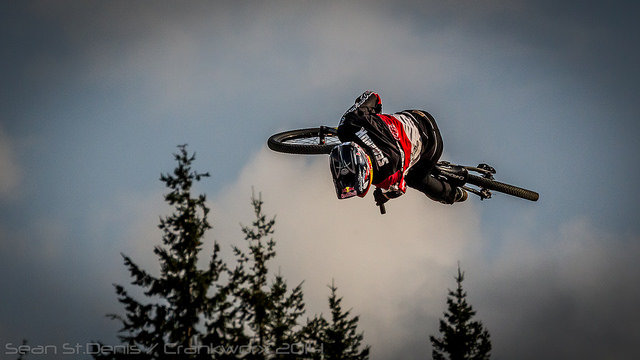 NEWS: WILL CRANKWORX LES GETS SET THE SCENE FOR BRANDONS BIGGEST YEAR?

NEWS: WILL CRANKWORX LES GETS

SET THE SCENE FOR BRANDON’S

BE THE FIRST TO WIN THE

With less than a month to go until the inaugural Crankworx Les Gets Slopestyle, one of the world’s best Slopestyle riders, Brandon Semenuk, has yet to confirm whether he will compete. The Canadian rider won the Crankworx Rotorua Slopestyle in Memory of Kelly McGarry in March, leaving him the sole athlete with a shot at securing the prestigious Triple Crown of Slopestyle, in the same year he has a shot at a fifth Red Bull Joyride ring.

IS THE PRESSURE MOUNTING UP FOR SEMENUK?

Brandon’s supreme concentration and careful planning make him the uber-gifted competitor that he is. These events are stressful and he’s no less thoughtful in considering where he’s at before making the decision to compete.

We see this as the ultimate year for him to leave his mark on the sport he’s conquered, but it’s ultimately up to him. He is already the best athlete the sport has ever seen. From this point forward, it’s entirely up to him how the story unfolds,” says Darren Kinnaird, Crankworx General Manager.

Semenuk holds a Slopestyle medal from every location Crankworx has ever visited, pre- and post-World Tour, including the most gold medals – ten – in the history of the disipline. And with construction now well underway, he could be among the first to take on the Crankworx Les Gets Slopestyle course.

More than 5000 cubic metres of earth was moved to create the new course and it’s got some quirks the athletes haven’t seen before,” says Kinnaird.

Dropping in off an eight-metre North Shore-style ramp, the riders will have three massive booters, a log ride and some major drops on which to craft the perfect run. The line is built by Alex Dropsy and crew, some of the best course builders in Europe, and it’s expected to give the predominantly Canadian and French field an arena to perform their best.

Thus far, Nicholi Rogatkin (USA), Brett Rheeder (CAN), Thomas Genon (BEL), Semenuk (CAN), Logan PEAT (CAN), Tomas Zejda (CZE) and the Sams, Pilgrim and Reynolds, of Great Britain have been invited, as the top eight riders from the 2015 FMB World Tour season.