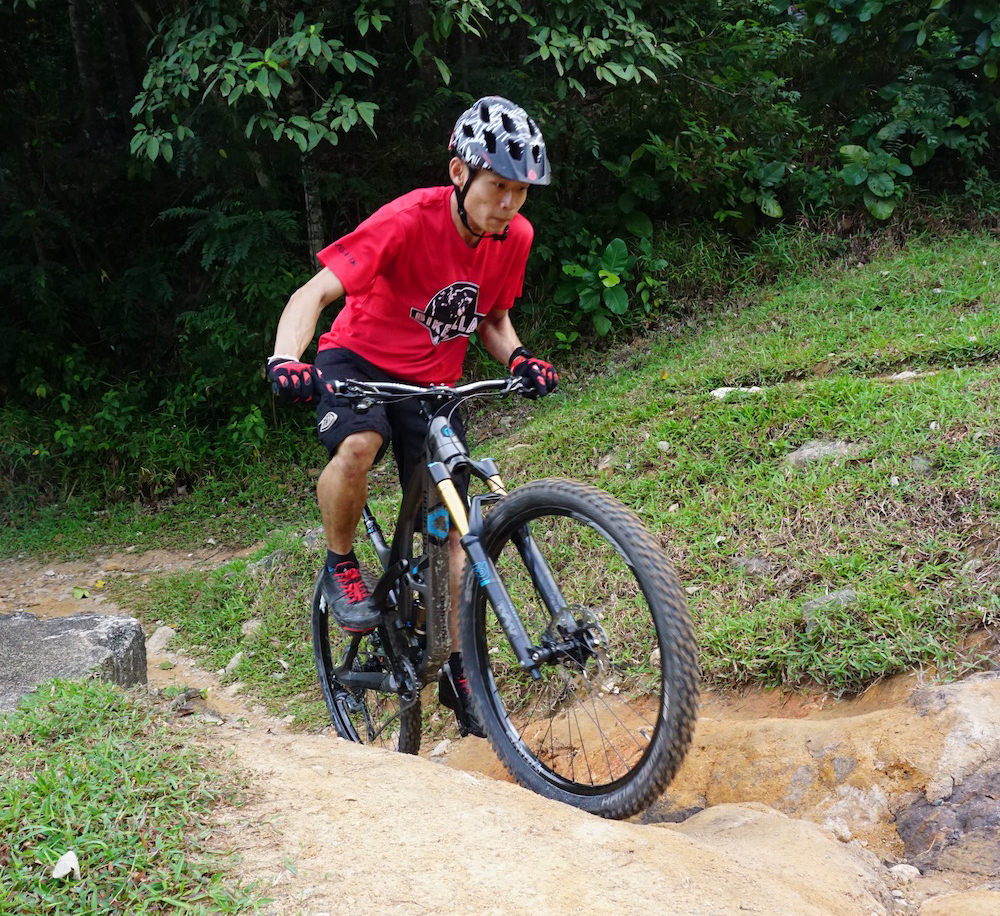 THE ENDURO BIKE THAT PACKS

VALUE AND SUITS EVERYONE

Some time back, we had a review on the Polygon Collosus T8. The T8 is what we would describe as a trail bike that can do beyond its intended purpose. We decide to revisit the Collosus family and check out the bigger brother N8 this time. The purpose of the review – to end this "sibling rivalry" between the Collosus N's and the T's once and for all.

With all the rage on Enduro in recent times, it is almost a no-brainer to always go for the Enduro bike in any bike model range. We hear you ask: "What's not to like about an Enduro bike when it could climb efficiently and descent with speed & style?" That really sounds like the ultimate deal sealer attribute when it comes to selecting a bike. But ultimately, riding a suitable bike goes beyond it's catalog product description. Are you (yes, YOU) more suited with what the catalog recommended? Or should you read between the lines? Could the "butts" give us a better overall picture than the catalog? Read on as we put the same few "butts" that had ridden the T8, at the same trails, on the N8 for this review.

FIRST IMPRESSION OF THE COLLOSUS N8

The Polygon Collosus T and N series is regarded as the timely pinnacle of Polygon's research since their launch. There's this new age frame design, their first venture into carbon mountain bike frames and the FS3 – an improvement from their older floating pivot design that isolates pedaling and braking from the suspension.

With the current demands on "enduro bike geometry", the Collosus N8's 66.3 degree head tube angle and 72.78 degree seat tube angle is just tipping the conservative geometry region. A medium-size frame has an effective top tube of 581.24 mm and a wheelbase of 1150mm. This translate to a somewhat tight cockpit compared to some other brands' medium-size frame. In fact, this medium-size frame feels tighter than a certain American brand's small-size frame. But one strong advantage about this bike is that, while the chain stay of this 650B bike remains short at 428mm, the rider's seated position is kept very neutral. This means the rider would be in good control of the bike in both climbs and descent and still able to flick the bike with relative ease.

In terms of aesthetics, the Collosus N (and T) series bikes are handsome machines. And with a new color added to the product range (new orange frame is for N9 only), this series of bikes would still turn heads at the trailhead.

HOW THIS N PERFORMED

The Collosus N series are slightly slacker than the T series bikes. But their frame design concept is predominantly similar.

In our previous review on the T8, we mentioned that the unique design of the frame gave this bike its personality. The long upper swingarm makes the bike supple for small bumps. The FS3's floating bottom pivot gave the frame a compression curve that is progressive and ready to take on bigger hits without bottoming out. The change from Fox Float CTD on previous year's model to Fox Float X improved the bike's previously perceived "premature progressiveness" behavior. The feeling of abrupt transition during the shock's mid stroke from supple to firm in a quick succession is now only felt when the rider rides very aggressively. And having 160 mm of front and rear travel (as opposed to the 140 mm travel on the T8) and slacker geometry did instill more confidence on the descents.

For those who are used to the Collosus T8, they would feel the additional burden of more travel and weight during long rides. For the typical Singapore trail loops, this added weight would not take away any riding fun nor add to any fatigue level substantially. In fact, we feel significantly more confident on the descents and that translate to more fun throughout the ride.

While the Collosus N8 climbs really well for a 160mm bike, we could not forget how efficient the T8 was at climbs. That's not to say the N8 is slow or cumbersome, it just feel like the more relaxed sibling during climbs.

As predicted, the riding position is extremely neutral, albeit a little snug & tight. This allows for a very responsive ride throughout.

The Collosus series of carbon frames are stiff! And that stiffness could be felt throughout the ride – we felt lots of feedback from the rider-bike contact points. Stiff bikes are good for energy transfer and control. (Ed: Nobody likes a wobbly flexy bike). But, if the bike's stiffness could be concentrated where it counts i.e. crucial flex points and joints, this frame would have been one point nearer to perfection. Alright … we are nit-picking here.

RIDERS THAT WOULD LOVE THIS BIKE

Riders who wants a bike that they could bring to all sorts of trail should seriously consider this bike. And that refers to ANY trail – from local loops, to long oversea natural trails to bike parks. While we are not saying that the N8 would ride as well as longer travel full-fledge gravity bikes, we believe it would bring out the fun in every kind of trail. With a full-fledge gravity bike, you would dread long natural descending trails that are dotted with climbs. But with an enduro bike, these are terrain that make the bike shine.

The Collosus was tested extensively in the volcanic and tropical terrain in Asia during initial research period, and subsequently sent all over the world for testing. For a taste of how hard the Collosus N series could be ridden, check out Kurt Sorge's Trail Assassin on his Collosus N Series.

The Collosus N series bikes are also suitable for those who cannot decide if they prefer to be faster during climbs or descents or both. This bikes is versatile and fast enough to ensure a fun ride throughout the whole terrain spectrum.

When, then, would the Collosus T series be a better choice?

The Collosus T series would be a better choice if your riding preference is more towards local loops, long cross-country rides (including long distance jamborees) with some occasional "mild" enduro courses thrown in – all this while keeping speed and efficiency as important criteria to determine your willingness to proceed with these trail.

On the other hand, if you are the type of rider that are always in search of technical sections in a trail, always ready to attempt drops and gaps, and yet ever so ready to join your buddies for regular local and regional rides, the Collosus N series would be the bike for you.

The Polygon Collosus N8 is price approximately SGD$4,900 while the N9 cost SGD$900 more. For the components listed and its good performance, we would say this bike is great value.

For more information of the Polygon Collosus T and N series of carbon mountain bikes, visit Rodalink at Rodalink Jurong East, or visit their online store.