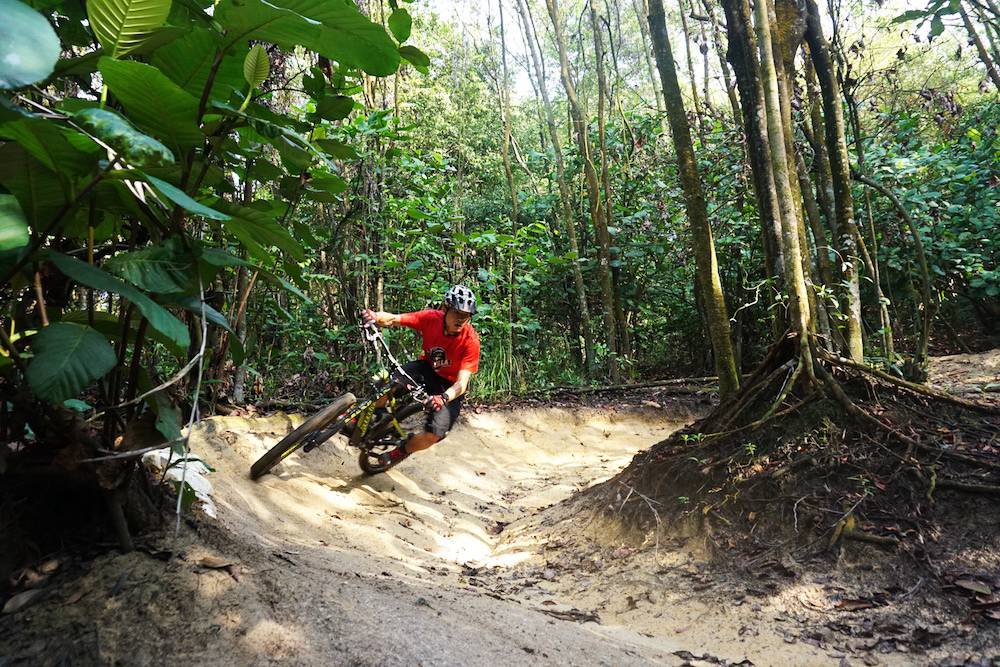 HOW DOES THIS GOOD OLD TRIED-AND-TESTED

ENDURO WEAPON FARE AGAINST THE EVOLVING

DEMANDS OF RIDERS IN THIS RAGING RACE FORMAT?

The Cannondale Jekyll Carbon we got hold of was launched early 2015 with a geometry revamp, updated rear shock tune, 27.5-inch wheels, more travel, and the unique carbon Lefty SuperMax PBR fork. While some may think that it is "old news" to review the 2015 Jekyll only now, almost a year after its launch, we beg to differ. With the debate on "new school" geometry going red hot, we wish to find out for ourselves (and our readers) whether the Jekyll is still relevant in today's Enduro scene.

The Jekyll is Cannondale's designated Over Mountain Enduro bike. And it boast of qualities that more than meets the demands of enduro races. For a start, this bike is named the Jekyll for its duo personality – it is both a disciplined climber and an aggressive descender. With 160 mm front travel and adjustable 95/160 mm rear travel, this bike seems like the ultimate do-it-all bike. Exactly what an enduro racer would want.

Our first impression of the Jekyll was that, it has all the numbers of a somewhat conservative enduro bike. Its 67 degree Head Angle is a little "steep" in today's enduro bikes standards. The seat tube angle put the rider in a centered neutral position at 73-75 degree. The 592 mm effective top tube and 1180 mm wheelbase for a medium sized bike also put the bike in a somewhat short/average enduro bikes' wheelbase category. The 440 mm chainstay is not exactly the shortest but it gives the rider enough room for some playfulness where opportunity arises. The single-pivot swingarm suspension gives this bike its responsive  and quick feel.

THE HEART OF THE BEAST

What gives the Jekyll its duo personality is the "heart" of the bike – the FOX DYAD RT2 rear shock. As the name suggested, the DYAD RT2 is actually two shocks in one!  (Ed: Dyad: something that consist of 2 elements). In this case, the DYAD RT2 give rise to a bike that Cannondale had been proud of over the years for its duo personality – one a well-behaved climber and the other a wild descender. In Elevate mode, the DYAD activates the shorter travel, lower volume air shock for rolling and climbing. In Flow mode, the longer travel, higher volume, linear air shock is activated for aggressive descents.

This 2 modes give the Jekyll very different personalities with different travel, spring volume, damping circuit with separate compression damping circuits and rebound adjustments! This means the Jekyll's transformation on suspension travel is not just skin-deep. It goes deep down and changed the way the bike behaves! Switching between Elevate and Flow also changes the bike’s sag height and geometry, keeping the rider in the proper position for the terrain. We like flipping the switch during our rides to feel the bike transform as we move from climbs to descend and then climb again.

Preparing the DYAD RT2 to fit a rider's preference is not an easy task for the initiated though. Cannodale uses a high pressure shock pump to get the Jekyll ready for the trail. (The high pressure shock pump goes up to 400 psi – which is not achievable by usual shock pumps.) As the DYAD RT2 consist of both positive and negative air chamber, the proper sequence is to drain the negative air chamber first before adjusting the pressure of positive air chamber. And then it's back to pumping up the negative chamber to the preferred pressure again. While this may sound tedious at first, doing it is actually not that complicated and once set right, the rider will totally love the ride. The sag indicator was a great help during this tuning process.

THE RATIONALE BEHIND USING PULL-SHOCK

According to Cannodale, it was the best way to utilize their three chamber technology. they gave 3 reasons for this:

(1) When something is pulled, it always wants to straighten back to its original position. It is easier to pull something out of a cylinder (shock cartridge) as oppose to pushing it in because pushing is prone to twisting while pulling tends to go straight and unobstructed. As such, it is more efficient to employ pull shock in a bike frame design.

(3) Pull shocks, especially the DYAD RT2 has only an aluminum wall between the oil bath and external air. This translate into better conduction of heat and thus able to maintain optimal operating temperatures even over long descends.

The disadvantage of Pull Shock is the additional space needed on the frame for the Pull Shock to move. This adds limitations to the frame design, in terms of geometry and linkage designs. But so far, Cannondale had been using the Pull Shock system to great results.

We simply have to talk about the Lefty.

This unconventional looking fork is both a conversational art piece and a superbly engineered masterpiece! Suffice to say, we LOVE the Lefty. A first ride with it already clearly showed all its strengths. It is light yet stiff, smooth yet controlled and precise. And once we got pass the initial doubt of it not being able to hold its stiffness at berms (especially right turn ones), we began to carve berms faster and faster with it. At the end of the day, we conclude that it would be classified as a sin to have a Cannondale bike that's not fitted with a Lefty!

HOW DID THE JEKYLL PERFORM?

The  carbon Jekyll is so stiff that we did not feel any flex throughout our rides – no matter how hard we rode it. Really impressive! The Jeykll is a very good climber – with or without switching to short travel! Credit goes to the stiff Lefty SuperMax PBR fork, the ECS-TC system, the DYAD RT2 and the frame geometry. For a start, the "short" wheelbase makes the bike very easy to maintain rider's position during climbs. The DYAD RT2 worked well in keeping the bike efficient throughout the climb.

The ECS-TC (Enhanced Center Stiffness – Torsion Control) system is Cannodale's way of eliminating the subtle flex and play that occurs in crucial links and pivots that connect the front triangle and swing arm. Instead of the usual cartridge bearings, they applied a multi-part system to achieve stiffness, quick response and improved terrain feedback from those linkage points.

On descents, the stiffness of the Lefty SuperMax PBR fork and the ECS-TC system shone through once again. The Jekyll was able to maintain good speed and the shock system works well to manage the small bumps well. For some reasons, while speed was good, cornering was not totally effortless and some body English was needed to steer the bike as we go along.(Ed: this could be due to numerous factors – from the need for some fine-tuning of the shocks' settings to rider's preference for the tyres' behavior) Due to its light weight and short wheelbase, the bike is also very flickable as we bomb down the descends. This upped the fun factor.

The short travel mode should not be restricted only for climbs. It was in fact the better setting when going through flowy sections when we needed a stiffer rear. In short travel mode, the bike may feel rough if the suspension is not tuned correctly to the rider's weight or preference. But once picked up speed, the DYAD RT2 would work its magic and let the Jekyll show its competence over the irregular terrain.

The test bike came with SRAM XX1 drive train which worked flawlessly. The wheelset gave some mixed feedback though. The DT Swiss Hubs worked well but we would prefer to have slightly wider rims and a set of more grippy tyres. Even lowering the tyre pressure didn't solve the poor grip complains. Cockpit was comfortable with a short stem but we felt that the bar didn't feel like 780mm as stated in the specification sheet. The travel adjuster was easy to engage to low travel but releasing it back to long travel needed some getting used to.

WHO SHOULD RIDE THE JEKYLL

The Jekyll is suitable for those who want a do-it-all bike that is efficient, easy to control (read: flickable) and built to win races. On the lighter side of things, those who wish to look good on a mountain bike should ride a Cannondale bike (Jekyll or other models) as its sleek construction really received more-than-usual compliments from both fellow riders and non-bikers. (Ed: Personal experience)

As Jerome Clementz said "The Jekyll is an amazing climber and so good on the descents. I switch the DYAD back and forth every run to gain the advantage on short pedal sections, the Jekyll is fast!"

We agreed with him on this statement.

While its short wheelbase may not appeal to those who are looking for "new-school" long wheelbase geometry, We urge every rider to try out both type of bikes (long wheelbase vs short wheelbase) first (by way of demo bikes or friends' bike) before embarking on the quest for their next purchase. Ultimately, it really depends on each rider's style, body proportions and preferences.

EMOTIONS AS WE RODE THE JEKYLL

Many times, the Jekyll gave the feeling that we are riding the Lefty that came with a frame, rather than a frame that was fitted with a good fork. That is to say; while the frame with the DYAD RT2 felt fast, efficient and stiff, the Lefty is that ONE component on the bike that stoked us the most! It's like saying the frame was designed around the Lefty! (Ed: Like we said, this was just an emotion that we had when we rode the bike, and it was subjective. Go ride one and tell us how you feel.) The old-school geometry of the Jekyll also made us feel we were riding ON the bike rather than IN the bike. But all said, the Cannondale Jekyll is a stiff, light and efficient bike that will go fast on both climbs and descends. And coupled with its lightweight and overall ease of control, this bike is made to win races!

For more information of the Cannondale Jekyll, contact Cannasia at: