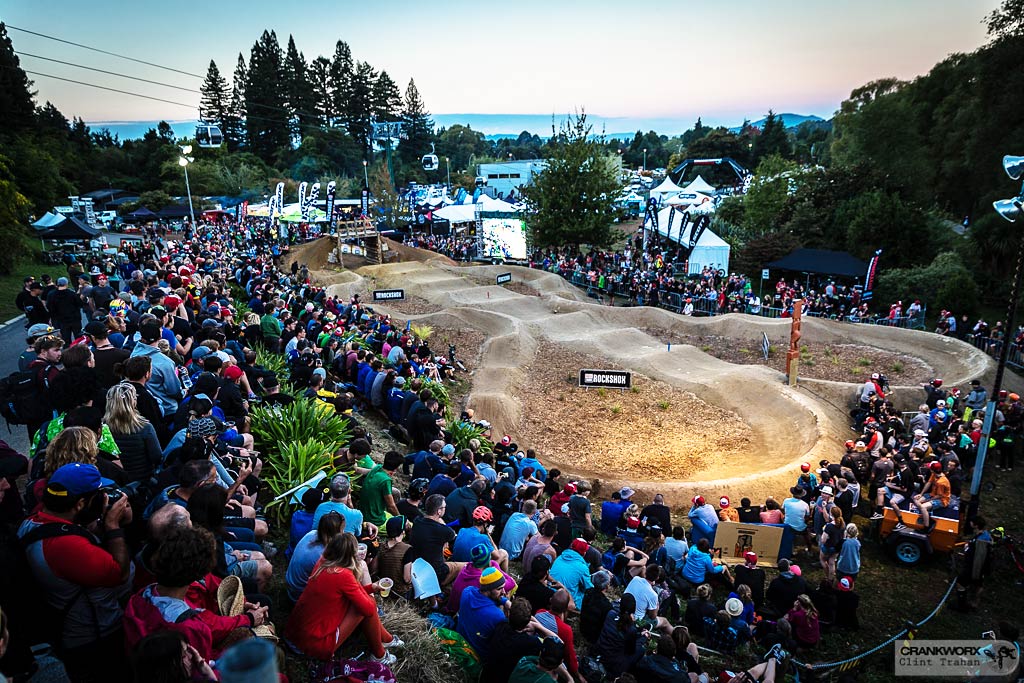 by problems in the start gate

It was a double Dutch win in the Rotorua Pump Track Challenge presented by RockShox as Joost Wichman and Anneke Beerten took out crowd favourites. Paired with Keegan WRIGHT (NZ), Wichman (NED) admitted it was a pretty cool feat to beat the younger Wright, a New Zealander half his age. But the big story of the night was in the start gate of the woman’s final as four-time women’s Crankworx Whistler Pump Track winner Jill KINTNER (USA) tried a launch at the wrong angle, getting tangled in the wheel stand.

“It’s my fault, really. I should have been at a better angle, so it wasn’t really a race,” said Kintner, disappointed in the defeat.

It took officials several minutes to decide whether the snag warranted a rematch and the crowd gathered seemed to revel in the suspense of the ruling. Periodically doing the Mexican wave around the tiered amphitheatre—a first for a Crankworx Pump Track—the dirt stadium was humming with anticipation over whether the mistake would be ruled a malfunction.

In the end, it was decided Kintner had erred and, as Beerten had already defeated her in the first round of their pairing, Beerten was happy with the win.

“Pump Track is such a cool thing to do. The whole vibe here and taking the win is amazing,” said Beerten. “The crowd were all wild and loud, and it’s amazing to have them in Rotorua and to be riding in Rotorua. It’s just sick.”

Joost echoed her sentiments, noting his win has been a long-term goal.

“I organize Pump Track races myself in the Netherland and Germany, so it’s actually cool to win one at Crankworx. I’ve been trying for a couple of years now to win one in Whistler or France, so it’s cool,” he said.

ALL IN THR NAME OF FUN!

“I was just relieved to stay on tonight. This is the first time I’ve ridden mountain bikes in six years and the first day I fell off and hit my knee real hard. The second day I fell off and hit the same knee in the same place,” said Walker 2012 BMX Olympic silver medallist. “…It was not worth pushing it. Big picture, Rio. This is just a bit of fun.”

Walker will compete in the UCI World Cup in Rio next month.