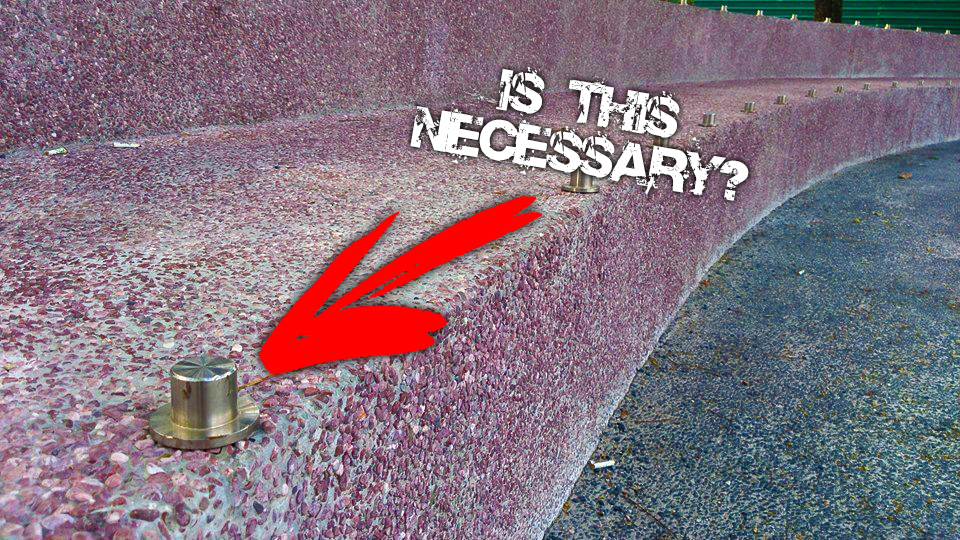 FOOD FOR THOUGHT: ARE THESE GRIND-STOPPERS ANY GOOD

FOOD FOR THOUGHT: ARE THESE "GRIND-STOPPERS" ANY GOOD?

A fellow rider noticed these newly installed markers along a stretch of sitting area at an amphitheater. We would like to call them "Grind-Stoppers" because these markers were predominantly installed to deter street riders, BMXers and skaters from loitering in the area and using these stretches of sitting area for their grinding tricks.

While we understand their intentions of regulating the right places for the right activities, we couldn't help but notice the potential harm these Grind-Stoppers posed to the general public. These things are small and are made of solid metal, usually a metal alloy that is weather-proof and tamper-proof. What we are trying to say is: these studs are hard! As a recap, the older versions of Grind Stoppers which could still be found in many parks are metal blades dividing each sitting space into individual lots. Those are no better than these …

Why are they a danger?

They are small and hard. And not easy to notice as their colours tend to merge well with the surrounding. Now, imagine funny Candid Camera-style kind of video footages here. Someone could accidentally slam his/her butt onto the stud unknowingly. If it hits a butt-cheek, it would be a moment of excruciating pain, maybe a bad bruise. If it hit a bone, say the tail bone, it could mean a bone on metal collision and that could be disastrous. Another scenario – a kid runs along the stretch happily and tripped (maybe due to another of these studs!). In a situation where there are no Grind-Stoppers, he would fall on a flat surface and able to pick himself up shortly. But what if he falls flat onto one of such studs? The consequence is again worse off than when there are no such studs.

Why are they even approved for installation then?

What are the estate developers and town council thinking when they approved such contraptions? In order to stop one group of users from using a certain premise, the safety of the location gets compromised? This does not sound logical. Are the threats of street riders, BMXers and skaters riding in non-designated locations such big problems that it can be traded off with the safety of the general public? Are street riders, BMXers and skaters even a threat to the general public to start with?

The Public Impression on Street Riders

This seemingly small observation may be a reflection of a bigger issue. Is this how the statutory board and governing agencies think of street riders (including BMXers and skaters)? Are there any ways we could improve images of street riders?

What we are doing for now

Bikezilla advocates cycling of all discipline, that we should ride a bike as often as we could. And street riding is one good way to improve on technical skills, keep fit, promotes social bonding amongst fellow riders and has an impact on young adult culture. There is a lot of good that comes with street riding if it is kept within certain disciplinary and safety parameters – this area is a discussion for another day – and the public should see these benefits.

We leave the discussion to the public and cycling community as to whether these Grind-Stoppers are a valid deterrence to street-riding. And how should we help the public understand the street riding culture better. Peace to all and ride on!