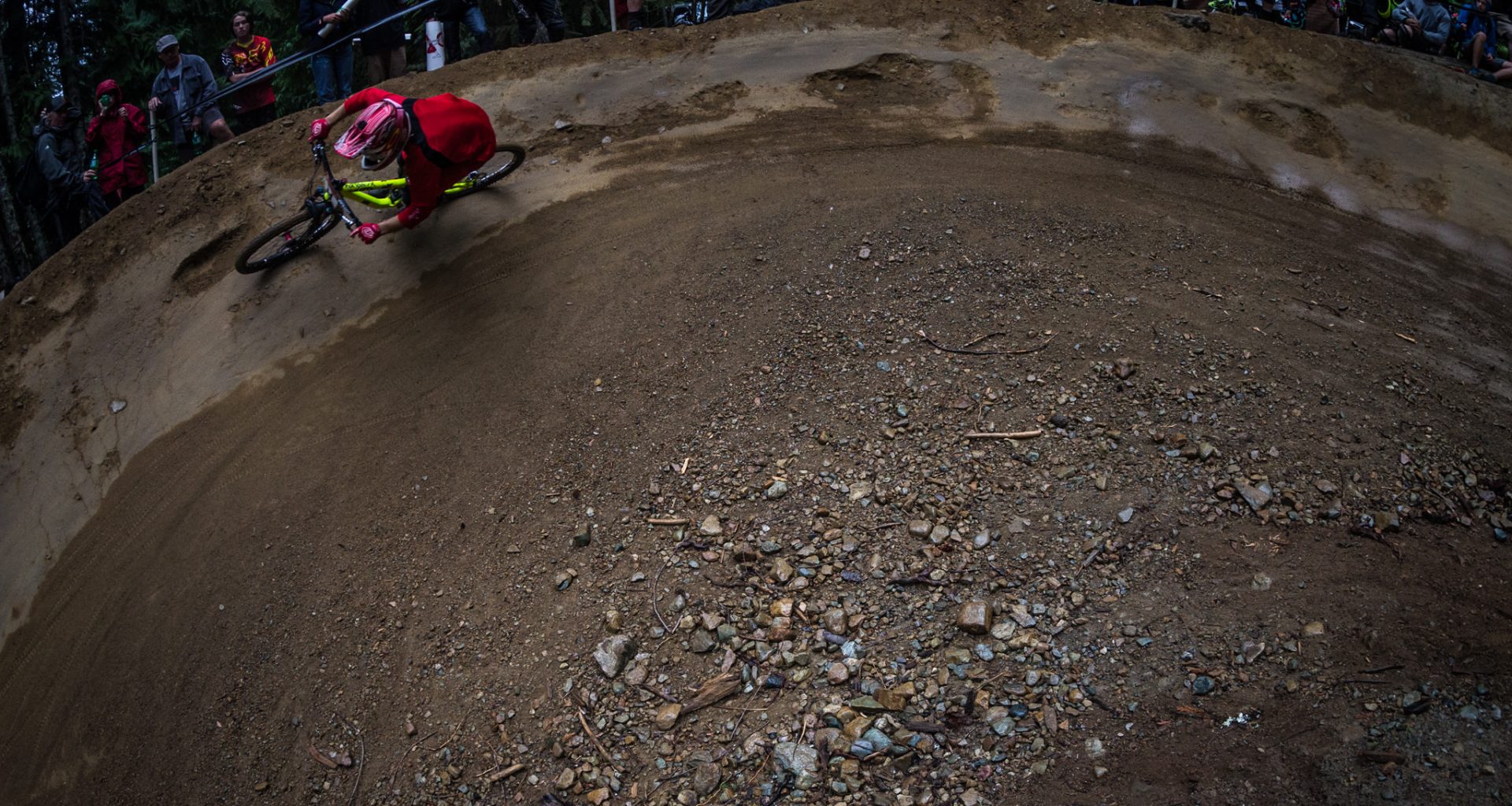 A-Line is one of the world’s infamous trails – with 39 jumps and 30 berms over a 1200 meter vertical descent, its reputation is well-earned. While the skill and speed on this challenging track earned Kintner and Hannah a spot in Crankworx history today, the vibe around the race is what most who watched the event will likely take away.

WHISTLER, BC August 13, 2014 – After a month-long dry stretch, Mother Nature decided to throw an extra challenge at racers in today’s Fox Air DH at Crankworx Whistler. But neither greasy conditions nor recent injuries could slow down the world’s top racers – Jill Kintner (USA) topped the Pro Women’s podium for the second year in a row, while Mick Hannah (AUS) got back in the game in a big way, returning to competition leaving fear and a recent shoulder injury behind him.

“The rain came in and the track was inconsistent – some spots were slippery and some spots were really good. It was hard to know where to push and where not to,” said Hannah. “I’m just really happy to get down safe and get a good result. It’s a good boost for the confidence.”

The win was especially key for Hannah who’s been sidelined for the past nine weeks after shoulder reconstruction surgery resulting from a crash in Fort William. Hannah said today’s conditions definitely made him a bit nervous.

“I’ve been riding for a week so it’s like, the muscles are really tired and I’m just trying to get back to strength. The main goal is World Championships which is in three weeks, so to get a result like this is really cool.”

Ahead of the men, the women took their turn to jump, scrub and whip their way down A-Line. Now in its 11th year at Crankworx, the women’s race has only seen a repeat champ one other time. Kintner’s win today, in 4:42.69, puts an end to that and reinforces her reputation as one of the most versatile female riders, especially given how physical track is.

“People think it’s smooth but it’s pretty rough today,” said Kintner. “These jumps are meant for cruising and to race them is really challenging.”

A-Line is one of the world’s infamous trails – with 39 jumps and 30 berms over a 1200 meter vertical descent, its reputation is well-earned. While the skill and speed on this challenging track earned Kintner and Hannah a spot in Crankworx history today, the vibe around the race is what most who watched the event will likely take away. The appearance of the Nitro Circus crew, including Travis Pastrana, racing with plate number 199, whipped the crowd into a frenzy. Meanwhile a series of stylish trains, including Eliot Jackson (USA) and Bernard Kerr (GBR) as well as the Masters brothers, Eddie (NZL) and Wyn (NZL), showcased just how much riders love this event.

The most memorable moment of the day though came from French rider Fabio Cousinie (FRA). Cousinie cruised into temporary first place in a button-up shirt and bow-tie – when approached by the broadcast host, Cousinie stole the show by getting down on one knee and proposing to his girlfriend, undoubtedly a Crankworx first.

While Hannah’s winning time boosted him ahead of today’s contenders, it was still well under last year’s winning time – Steve Smith (CAN) won the Fox Air DH last year with a commanding time of 4:12:08. Smith’s absence has been a noticeable one in many of the downhill races at this year’s Crankworx – an ankle injury has rendered him unable to defend his titles from last year, including one of the most popular downhill races at Crankworx, the Canadian Open DH. Smith has won the event for the past three years. In his place the world will definitely watching Hannah to see if he can repeat today’s success, as well as Marcelo Gutierrez Villegas (COL) who smashed yesterday’s Garbanzo DH. Several other riders said to be competing are carrying some momentum from recent World Cup rounds, as well as past Crankworx races, including Troy Brosnan (AUS), Danny Hart (GBR) and Andrew Neethling (RSA).

The Canadian Open DH at Crankworx Whistler is set for this Sunday, August 17, with amateur divisions from 11:30 a.m.-2:30 p.m. and Pro Division (live webcast on Red Bull TV and www.crankworx.com) from 3-5 p.m.