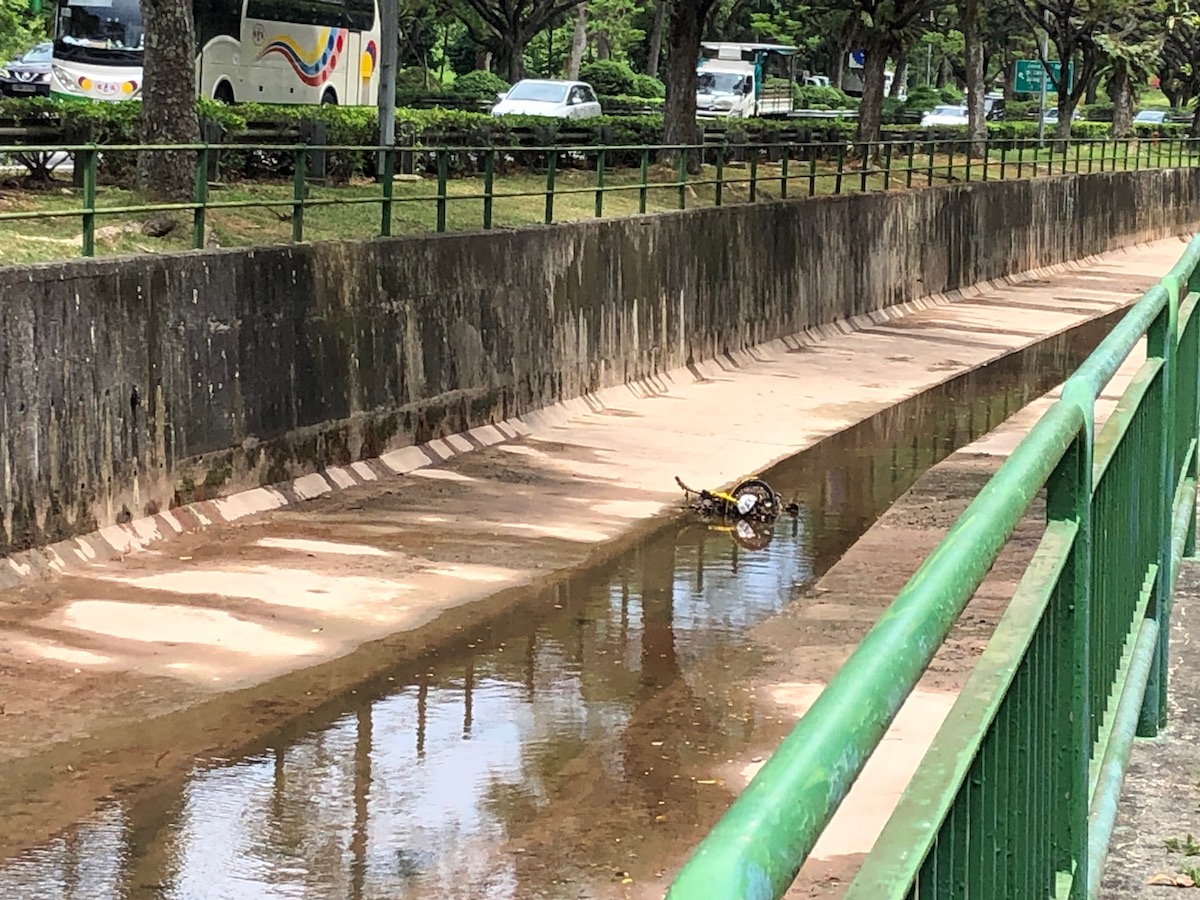 A BEAUTIFUL VISION AND AN UGLY REALITY

(Does this look like an appropriate bicycle parking area?)

Bike Sharing – the new era's solution to urban commuting. Case-studied in many regions around thew world, it is one big step towards ready, convenient, green transportation that requires very little adjustments to our city's existing infrastructure sans bike lanes and parking area. The benefits are numerous and there doesn't seem to be any disadvantage to it! (Really?) A few years into the bike sharing heat with a couple more smaller entrants joining this lucrative market, we see the supply side reaching near saturation. On the other side of the coin, the ugly side of bike sharing shows its true colors. It has been a long-time concern with the writers and riders of Bikezilla. We will tell you why.

(The proposed vision. While this is still a common sight, it is only one side of the story)

WE SUPPORT THE BIKE SHARING MOTION

Till this very minute, we are still convinced that bike sharing is one of the crucial first steps towards a greener community. And the fact that it involves the use of bicycles means that bike sharing would help cultivate the habit of cycling for the general public. With bicycle etching a place in everyday life, there would likely be a gradual increase in competence in cycling with the general public. We hope to see more people pick up any cycling discipline as their main sport.

In all of bike sharing's awesomeness, it is not a simple project. Many aspects of city planning need to be considered and many exisiting features of the city would be affected. For those who had not given this issue any serious thoughts, let us start you off with listing the objectives of bike sharing versus the outcomes so far.

(Vision: commuters enjoying a beautiful city … where are the rest of the bikes?)

"Imagine a world where you can pick up and leave a bike wherever you need to go. Enter Mobike: a bike sharing service to fulfil urban short trips conveniently, anytime, anywhere, by combining innovation and today’s IoT (Internet of Things) technology. Mobike is green, reduces congestion and continually strives to improve the quality of city life."

"OBike is Singapore's first homegrown stationless smart bike sharing company which uses technology to change how transportation is viewed locally. It allows commuters to travel during one-way first and last mile commuting – via bicycles located all over the island. This provides a convenient and environmentally friendly commute option for all, especially given Singapore’s compact size and interconnected urban areas."

THE GEEZ OF WHAT THESE BIKE SHARING COMPANIES ARE SAYING

Out of the 7 points above, let's see which are the ones we should read between the lines.

Resource Sharing. This is the core physical aspect of the whole project. So it's all good at the moment.

Stationless rental. This sounds very attractive and convenient at first glance. But, by now, everyone would have seen its ugly side in its full ferocity. Look at the Garden City that you are/were so proud of. It is now littered with bicycles strewn at every corner. Does the city feel like a giant junkyard for unloved bicycles now!

To expand a little on this point – Is a little bit of extra walking to a bike station really that inconvenient? Or is this just a cheap excuse (disguised as a benefit that the people wants), to hide the main objective of saving cost for both the rental company and the local government?

Since young we were instilled with good values like civic-mindedness, tidiness, responsibility etc. The current bike sharing scheme seems to encourage the total oppostite of this! With commuters leaving their used bikes at the weirdest places, treating these machines as disposables, and sometimes destroying them for pleasure! How is this stationless parking in line with long term effort of maintaining Singapore as a clean garden city?

Reducing Congestion on the roads had always been functions of the Certificate of Entitlement (COE) and Electronic Road Pricing (ERP) systems. The number of cars are fixed by the COEs and the ERP system regulate which time slots should commuters be discouraged further to use their own transportation. As mentioned by the bike sharing companies, bike sharing fulfils the "last mile commute" of a journey. Where buses on short town center routes were formerly the go-to last mile commute mode of transport, bicycles now took over a large part of this burden. As such, if it is said that bike sharing reduce congestions, it would be more evident within the suburban neigborhood areas and and the reduced reliance on town center buses. Not as significant for city centres and major roads.

Did bike sharing improve our Quality of City Life? In a broad sense it did. And as mentioned, Bikezilla is totally appreciative and in support of it. It is the the "how" that we see a major flaw. The implementation of the bike sharing scheme needs to be fine tuned.

Cost to government. Money is always a big determinant to any business decision. With a claimed "zero cost" to infrastruture, the proposal would sound extremely attractive. Common sense here. Take a step back and see for yourself. Is there really no cost to the government? Note that we are leaving cost of building bike lanes and park connectors aside as they are cost to the government whether there are bike sharing scheme going on or otherwise. The real cost from what we see is the shifting of one type of congestions to another, the deterioration of the beauty of this Garden City, the gradual conditioning of a segment of people who are not corrected for being inconsiderate (parking anywhere with total disregard).

At the end of the filteration process, we gathered these goodness;

And at the flter cone, we found these dirty residue …

THE PROBLEMS THAT SURFACED

It is unsightly, disorderly, untidy and reflect the inconsiderate attitude of the users.

Let's be honest about it. The haphazard parking of shared bikes everywhere is an eyesore. It's a fact. One of the unique selling proposition of our local bike sharing scheme is being Stationless. As such, we cannot blame users for parking their bikes at their convenience. The solution to this would logically point to: Stationed pick-up and returning points.

It also shows that the government is exhibiting double standards where parking of shared bicycles are concerned as opposed to private bicycles, motorcycles and cars. Before bike sharing scheme started, would we have expected bicycles to be parked along (Park Connector Network) PCN, at traffic light islands in the middle of the road, beside bus stops or anywhere else where the user find it creative to do so? It is now a common sight. But cars and motorcycles would be fined and given demerit points should they be parking at the places mentioned above. Solution to this? Reassess the situation and do the right thing, suits!

There are cost involved to the community and government. The cost of bike sharing to the community and local government are the increased in danger due to congestion and obstruction these haphazard parking had caused. These cost, while not a physical entity to the local government, would be borned by the citizens/residents who experience these inconvenience and/or risk. (Opportunity Cost) At the same time, the untidy sight also dilutes the effort that the local government had put in to beautify our city – suburb or otherwise. There is no such thing as zero cost, it's just a matter of who is footing the bill. Solution: Let's be realistic about the cost components.

(Destroyed for a moment's pleasure. How easy would it be for the bike maintanance dude to retrieve this bike?)

Taipei has a very successful bike sharing system for many years. And if the observations above is agreed to be realistic, then it's time to revisit the model-study with Taipei's bike sharting system. Land for bikes cannot magically appear out of nowhere. Some long term city planning are defintely needed. Let's see the suits get to work on this.

Meantime, let's be civic about bike sharing and give these workhorses some love!

Photos by Bikezilla and mobikes