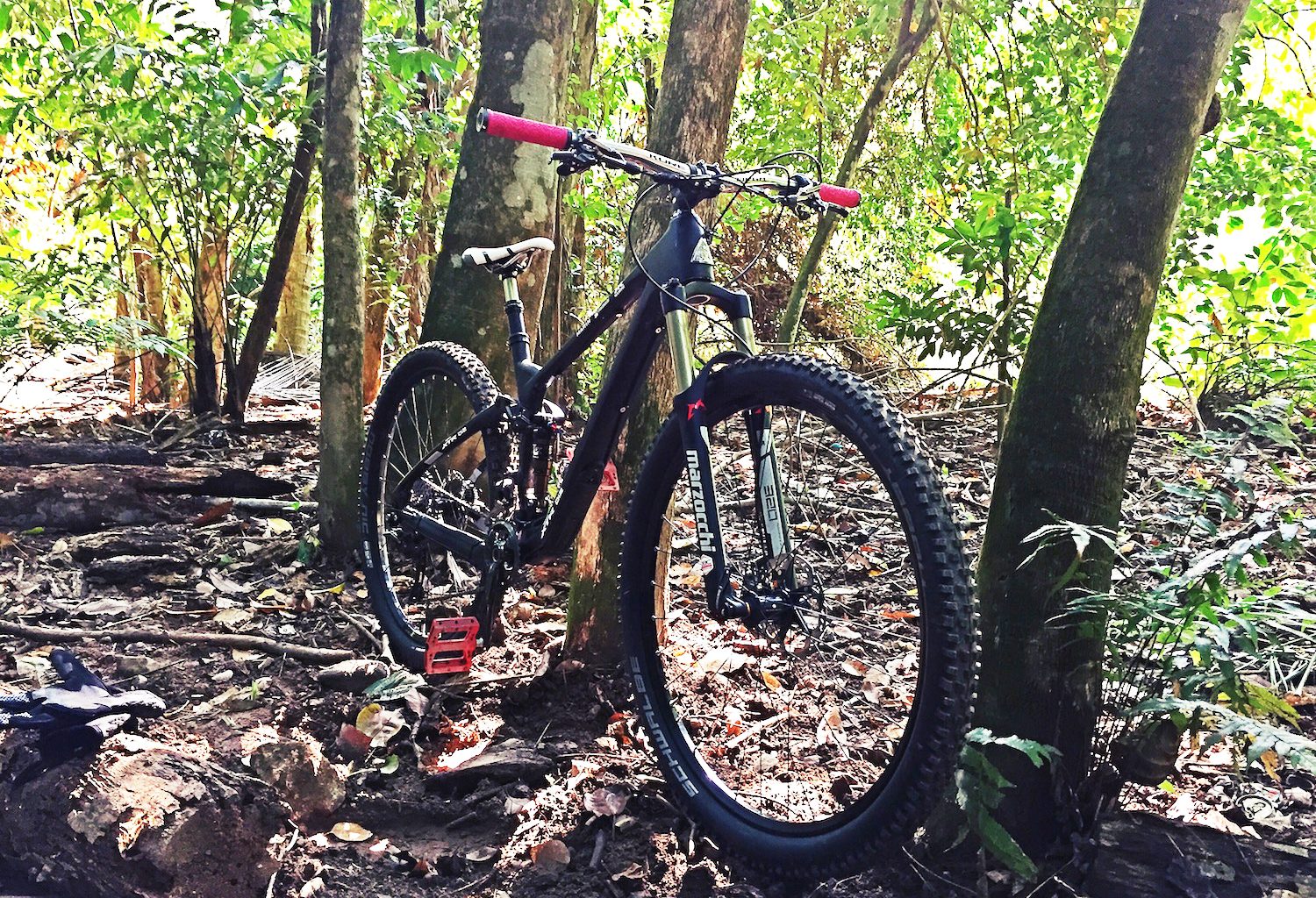 The Marin Rift Zone Carbon 29er is part of the new range of Marin bikes that comes with their new frame concept and an improved linkage design. Considering Marin's first right hook at the market  earlier with the impressive Attack Trail 650B Enduro bike, will the Rift Zone continue the path set by its 650B siblings with some 29er finesse? We took the Rift Zone for some extended riding and testing sessions. Read on for our review.

On first impression, the Carbon Rift Zone 29er is simply a bigger version of the 650B Mount Vision. The frame shape, colourway and linkage are all similar. But on closer inspection, there are some key differences. For a start, the wheel size and proportions of the bike are (obviously) different. The 29er has a slightly longer wheelbase and higher stack but a lower stand-over height! The main pivot location of the Rift Zone is slightly higher than on the Mount Vision to allow more anti-squat – which should translate to a firm pedaling feel under power. This ends up giving the Rift Zone a relaxed feel where the rider fully sits in the bike.

With a head angle of 69.65 degrees, and an actual seat tube angle of 74 degrees, this bike possesses a comfortable geometry that most riders searching for a fast rolling trail bike would like. The wheelbase comes in a little on the short side (despite the 29inch wheels) at 1145.4mm with a medium frame. Coupled with its relatively short chainstay length of 440mm, we ended up expecting this bike to be on the agile side where 29ers are concerned.

The Carbon Rift Zone consist of a carbon monocoque main frame and carbon swing arm. The Fox Float Factory CTD BV Kashima provides for suspension duty, consisting of 110mm of efficiently applied travel through its IsoTrac Suspension System. The IsoTrac Suspension System is predominantly a single pivot system with continuous-fiber carbon-monocoque flex points in place of pivot bearings. Marin replaced the pivot bearings with these flex-stays to maximize stiffness and keep frame weight down. Torsional stiffness built into the swingarm construction are supposed to keep the rear wheel inline with the centerline of the frame, so the rear wheel stays grounded and in control all the time.

The rear shock has been custom-tuned for the IsoTrac System's leverage ratio and is supposed to maximize pedaling performance and mid-to-late stroke terrain management. This linkage system has a different leverage ratio from the QUAD-Link, the floating pivot suspension system that Marin reserves for their longer travel bikes. While the IsoTrac is less progressive compared to the QUAD-Link, it is adequate and quick. As such, it is suitable for short travel bikes. Due to the application of flex-stays in the overall suspension design, the rear brakes are mounted on the stronger chainstay instead or the seat stays.

The IsoTrac system runs on Enduro bearings inserted into cold forged and CNC linkages and adopts the E-Thru Axle System.

Aesthetically, the Rift Zone features 4-in-1 internal cable routing, replaceable bash guard and cable guides on the bottom of the downtube.

Marin strongly recommends their customers to get their complete bikes, where components have been hand-picked to best complement the design focus of the bike in order to maximize performance. For those who are more experienced with the technical, or just need a new frame, they are always welcome to customize the bike to their own liking. One thing to note though, is that the optimal stem length to use for the Rift Zone is 70 mm. This stem length, coupled with the slightly smaller across-the-sizing-board frame length evens off the previously presumed tight cockpit fitting of the bike. In fact, the cockpit felt reasonably comfortable with enough space to adjust riding positions through long rides.

The Rift Zone is a trail bikes that seem to facilitate climbing efforts more than rowdy descents. This is normally the case for shorter travel trail bikes. And indeed, the Rift Zone climbs very well. We tried the bike on familiar slopes and all felt that on top of being easy to stay in line throughout the climb, the bike best complements a relaxed riding position. This gave us a healthy and welcome confidence boost on climbs which ranged from smooth to moderately technical. We attribute this largely to the natural characteristics of a 29-inch wheel, the geometry settings of the bike and the IsoTrac Suspension System (coupled with the flex-stays) which truly kept the rear wheel grounded for a constant delivery of power and forward drive.

Pedal bob when speeding through the trails was minimal and there was just enough anti-squat to facilitate climbs and cornering. The stiffness of the frame and it's custom tuned Fox Float on the IsoTrac suspension with flex-stays seem to hit well within the "sweet spot region" in terms of trail performance.

On the descent, the Rift Zone performs reasonably well for a 29er on Schwalbe Nobby Nic Trail Star tyres. It was only when we tried to descent faster, and perhaps a little more spiritedly, on more undulating terrain that we felt the rear wheel losing some traction and control. Bear in mind this is only a 110 mm travel bike, so some limb-powered dampening is needed (i.e. Body English).

Despite it’s less than stellar descending characteristics, the Rift Zone is a really fun bike to ride, keeping us happy and wanting for more while on the trail. The bike, and the custom setup we had for this bike somehow made it a very comfortable and relaxing ride.

The only thing we wish the Rift Zone could improve on is the wheelbase length. We believe that with a longer wheelbase, the bike could become a more stable and confident descending machine without compromising on its impressive climbing capabilities.

WHO SHOULD RIDE THIS

At $6,250, the top spec-ed Rift Zone XC9's is good value (based on its spec-ed components) but but not exactly the most affordable rig around where your wallet is concerned. Alright, there's some slack here – with Rodalink/dealer's 5% member discount it would be $5,937. But it is a good investment if you want a light carbon mountain bike with good components that could encourage you to ride more.

Want the same trickled-down goodness at more affordable packages? The Rift Zone XC8 carbon with Shimano XT and Fox Performance suspension retails at $5,200 and Rift Zone XC6 aluminum is only $2,470. Now there's a Rift Zone with the same good riding characteristics (albeit build weight and components differences) that suits every size of wallets. All Rift Zone frames (carbon or aluminum) share the same geometry.

The Rift Zone is a very likeable bike (or frame). It is extremely easy to get used to, so it’s suitable for those who are getting their first 29er mountain bike, or for epic ride warriors who intend to ride the whole day or to explore the less-trodden trails.

This bike is also ideal for those who intend to get a mountain bike to enter into the cycling lifestyle. The comfort and easy-going nature of the bike is a definite motivator. As it is so easy to get used to, it is going to make beginners enjoy cycling longer periods and farther.

For the racer and epic riders, this bike's neutral and balanced feel would give you more mileage, in less time. And that alone is enough reason to want to choose this bike over another one.

(As we are testing the Marin Rift Zone frame set with a custom build, this test bike is spec-ed differently from the actual complete bike packages available at the stores. But we maintained the use of a 70mm stem and the stock rear shock throughout the test for the factory-recommended results. )

The Marin Rift Zone is available at all Rodalink stores and authorized Marin dealers.